The Winter 2018 season brought us a new romance anime on Amazon Prime, one that has both excited people and garnered some controversy. I found myself quite excited to see what the show had to offer as the art seemed pretty solid and the story could present some interesting takes on the nature of stagnation and people’s dreams for the future. However, one of the major roadblocks and criticisms of the story has been the relationship between Akira and Kondo, their age gap, and the nature of their relationship. It’s been interesting to see how the show both works around this and fails in some ways to mitigate those criticisms. For me, the show had its ups and downs. I did enjoy the art of the series at points, and I did enjoy the story surrounding their relationship, but I can recognize that After the Rain has its faults.

After the Rain follows the story of ex-track club star who, after sustaining an injury that leaves her unable to run anymore, takes up a part-time job at a family restaurant. It’s there that she meets Kondo, the bumbling 40-year-old divorced manager of the store, a man she finds herself falling for. It’s a story about stagnation in the pursuit of dreams and the choices we make when facing a crossroads. One girl dreamed of being a track star and feeling the wind in her face. One man dreamed of following his passion and writing the next great novel. Will either of them be able to keep the promises they made to themselves? 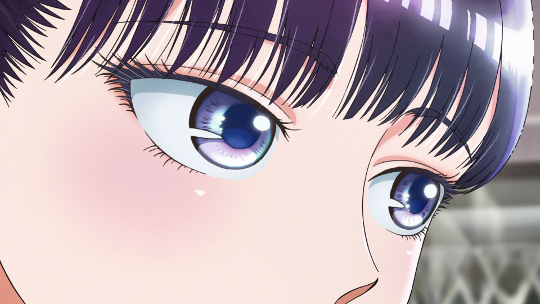 Wit Studio was behind the animation for this show, and for most of the series I haven’t had a problem with it. There were a lot of nice shots of billowing clouds and the character designs were pretty strong all around. I will say that they tend to use a lot of close-up shots of eyes and faces. Much of the time these shots are more detailed and highly rendered than the normal scenes in the anime, which both allows them to play up highly emotional scenes while providing some bursts of color and detail to an episode. Wit Studio and director Ayumu Watanabe love these types of scenes, and while I think they can be used in such a way as to give emphasis at certain moments, I also think they are somewhat overused. I also think that Wit’s use of bubble and particle effects can be very overused. It makes it feel like they’re really trying to push the whole shoujo romance feel of the show (even though the manga is originally seinen), and just went a little too overboard. I have to also say really quick that what is up with Akira always looking like she’s in a perpetual state of surprise? I guess it makes her look cute and innocent in a way, but it can get a bit weird.

Otherwise, I think that the backgrounds are pretty strong, with special emphasis on all the large shots of clouds. I’m a weird sucker for clouds in a way, probably because I live in New England where we don’t get many chances to see huge storm clouds roll in. But they also provide a nice mood to a scene, both contemplative and nostalgic in that they carry a certain amount of unrealized potential to become storm clouds. It’s an interesting thing to contemplate, something I’m honestly tempted on writing more about in a future post. In this way they become almost a metaphor for adolescence and the dreams we’ve put off or veered from the path of. But in the simplest form, they provide a great backdrop for any scene, especially for After the Rain with its history of weather bringing people together.

Some of the biggest conversations going on around After the Rain is about the kind of relationship being presented. There are a couple different levels to it. For one, Kondo is 40 years old, a divorcee with a young child. Akira is a 16 year old girl still in high school. That’s a pretty big age difference, not to mention that she is under the age of majority. The other aspect is that he is her manager, in a place of power and influence over her. These two things combined create a very delicate situation that comes down to how the relationship is tied together at the end of the series. I feel like I didn’t have as much of a problem with their relationship as a lot of other people did, though there were moments where the story started to cross a few lines. It all seemed to come down to the basic themes of the show and the last couple episodes.

In a way I feel like we’re meant to sympathize a bit more with Kondo than we are with Akira. We definitely get a bit more characterization of him, inner thoughts, and better conversations with friends that give us a better idea of who he is and what his past was like. Kondo is a man who spent his early years striving to become the next great novelist. He spent hours and sometimes whole nights writing, missing his son’s entrance ceremony, and eventually driving his wife away from him. But somewhere along the way he lost the will to write, but has never lost the passion for literature. It’s slowly through small actions like him writing in his notebook on breaks, to seeing inside his office at home, and then conversations with his friends that we begin to see the hole that is left empty where writing use to be. As a manager at a family restaurant, he’s out of his element and begins to seem bumbling or stupid in a way. 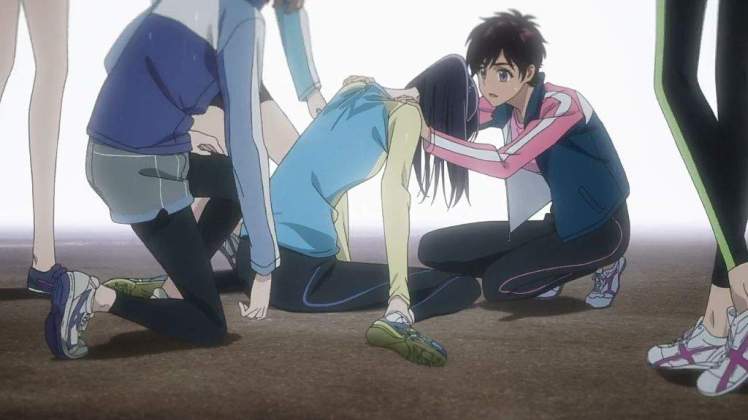 Akira gets quite a bit of characterization as well, but I honestly don’t know if it’s of the same quality as Kondo’s in the way. From her story, we see that the loss of her ability to run has also opened a hole in her heart as well. It’s after one of her clinic appointments that she walks into Kondo’s restaurant with a heavy heart. It’s his kindness and humor that makes an impact on her, and in her emotionally vulnerable state, she falls for him and begins using this new passion to fill the hole that running left open. One of the things I wish we got more of is her interactions with her friend from track. They were childhood friends with a long past, and even if their relationship in complicated now, I feel like their conversations could be a little more interesting. It’s towards the end of the series as well that I feel like we see more of this one-sidedness in characterization. We see quite a lot of Kondo rediscovering his passion for writing, but I feel like not enough of Akira beginning to run again or even starting to go to physical therapy. 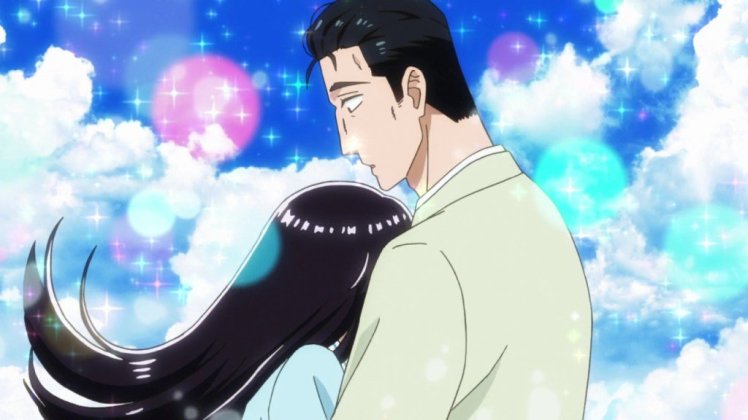 But I think it’s this ending in general that really saved the series from potentially crossing the line for many people. I felt like I didn’t have that much of a problem with this series because the ending and the main story in general focused a lot more on Kondo and Akira’s rediscovery of their passions than on their actual relationship. In the end, After the Rain becomes more of a story of how people fill the gaps left behind by unrealized potential or passions they feel are unreachable. For Kondo and Akira, they take comfort in each other, trying to forget about their past and focus on something new. Their relationship begins to evolve towards the end though, into one of mutual support and they begin to remember how important each of their passions were to them.

Let me know what you all thought about After the Rain in the comments below. Do you feel like they crossed a with their relationship in any way? This Sunday is also PAX East. I’ll try to get some more posts written up this weekend, but no promises that they’ll be on time.