Tsuki Ga Kirei was one of those shows that I needed to try watching twice before I actually finished it. This anime has quite a few problems, but is held together by the relative strength of the story behind it. I definitely don’t think this will be a series I ever rewatch again. However, I won’t deny the fact that there were a few scenes that did move me through the course of the series. As part of Crunchyroll’s Spring 2017 anime season, I’ve seen some praise from reviewers for this series, while ignoring some of the glaring flaws that almost made me completely dismiss it. A lot of these might have to do with the relative inexperience of Studio Feel who were in charge of its production.
The story of Tsuki Ga Kirei follows the growing relationship between Mizuki and Azumi who are students in the same middle school class. Mizuki has a passion for track, finding joy from running. Meanwhile, Azumi aspires to be a writer, joins the literature club, and participates in the town’s cultural festivities. When the sports festival comes around, Mizuki and Azumi are put on equipment duty together, allowing them a chance to get to know each other better. Through the messaging app LINE, they become closer and eventually start dating to the surprise of many of their friends.

This anime’s biggest shortcoming is its animation and art. I know I can be very picky when it comes to the art of the shows I watch or manga I read. I’ve been trying to look past it more in an effort to give more stories a chance, but if there’s one thing that annoys me the most is shoddy 3D animation. To Tsuki Ga Kirei’s detriment, it just so happens to be filled with bad 3D animation throughout. Studio Feel used 3D for the vast majority of their crow scenes, overlaying their 2D on top to make a weird conflicting scene in total. The people in the background wind up looking and moving like wind-up toys: stiff, awkward, and uniform. When displayed in tandem with the 2D, it becomes this mess of contrasting animation that was the main reason I stopped watching for weeks after the first episode aired. To make matters worse, this happens multiple times during an episode, effectively making my enjoyment of what is a pretty good story limited at best.

Besides 3D animation, the studio’s understanding and use of light and shadow is mediocre at best, making the characters look washed out in almost all levels of lighting. For one, we get large highlight stripes on their faces pretty much regardless of how much light is in a scene. With the shadows being minimal, this creates characters whose faces are almost always washed out. We also get frequent moments where I’ve questioned if the animators know where the light sources in a certain scene are. There have been quite a few moments where I’ve seen highlights on opposite sides of a character, making me stop and question where the light is actually coming from. Paired with the highlights being stark white, it creates a really weird art style. I guess they were trying to go for a more pastel, nostalgic mood, but the way they implemented it just doesn’t work. 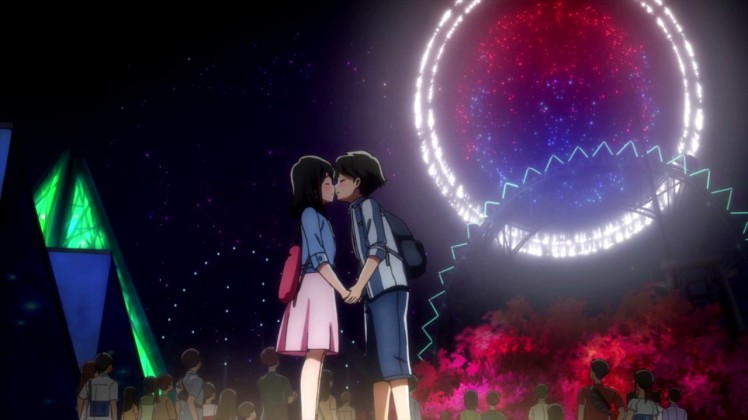 What kept me watching this series, however, was the story. While I won’t say it’s the best, it does have a lot of the qualities of a good romance. For a start, we have two characters who are fairly well-rounded in terms of their personalities, likes, and dreams for the future. Mizuki finds enjoyment in Track and competing in competitive racing. She’s recognized by her peers as a really good runner, and draws Azumi’s attention because of display of a sense of freedom on the track. But, that sense of freedom transforms into anxiety and shyness off the track to the point where she needs a little stress ball mascot to help her calm down. For Azumi, we see that his passions lie in writing as he tries to submit his stories for publication and sees certain works of literature as sources of life advice. We also see his involvement in his town’s cultural festivities with his playing of a major part in the town’s big festival procession. If there’s one thing I have talked about multiple times in my reviews is just how important it is for characters to have lives outside of their relationship. If we as viewers don’t have a sense of who they would be if they were never together in the first place, how can we see them as well-rounded characters? 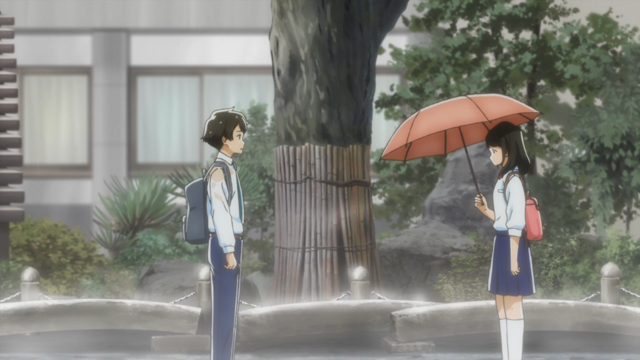 The main conflict in this series revolves around what happens when your friends also fall in love with your significant other. What we end up getting from this is a story of insecurity, relationship inexperience, and mature growth of character. Muzuki and Azumi are both rightly inexperienced and insecure about their relationship, as it is their first and they are only in middle school at this time. Through their conflicts and their efforts to make their relationship work, we begin to see their maturation as people. Azumi learns to stand up for himself and his wants and dreams, while Mizuki learns to have more confidence in herself as a person. At the start of their relationship, Mizuki and Azumi’s declarations that “I like you the way you are” allow them both to pursue who they want to be as singular people and as a couple. While some of the scenes of jealousy got a little grating, I do understand that the ability to look past that sense of insecurity comes with age and experience.

Surprisingly, though, the scenes that I enjoyed the most were when Azumi realizes just how much his mother cares for him and the shorts at the end of each episode. That particular scene with Azumi and his mother I think was one of the best parts of the show, as it displays not only a growth in Azumi but also his mother who has been hounding him about his future since the beginning. We see her recognition of his hard work and his realization of her constant support, and it’s moving to say the least. In an almost opposite emotional sense, I really enjoyed watching the shorts at the end of the episodes. They kind of reminded me of what could be a 4-koma adaptation much like Tsurezure Children (which is getting its own anime this season). The shorts also allowed for some more characterization of the side characters which I thought was lacking quite a bit, injecting some comedy in a show that was lacking on that front.
So while the story is good, I will say that the ending they chose was pretty melodramatic. I won’t spoil it for you, but it did remind me of some of the most stereotypical romances. It also featured a pretty rushed prologue that almost didn’t need to be there if only because I’m not sure the story needed a wrapped up conclusion. In the end, I probably won’t be returning to this anime again, but it was a enjoyable watch if you can ignore some of the glaring animation flaws, I know I can’t.