Cardcaptors has been a series that I have returned to again and again, whether it was trying to learn to read Japanese through its original manga or watching and rewatching the 70 episode anime and two movies. Now, after almost 17 years, CLAMP is bringing back one of their most popular and beloved IPs for a new — and old — generation of readers. Cardcaptor Sakura: The Clear Card Arc is both a continuation and a modern retelling of the original story. I say modern retelling in the sense that the content and world are updated to match our current culture and technology while also following the same storytelling formula of the previous series. As someone who is an avid fan of the series, I have both reservations and hope that CLAMP will be able to make good on their past success with both the new manga and the anime coming out in January. 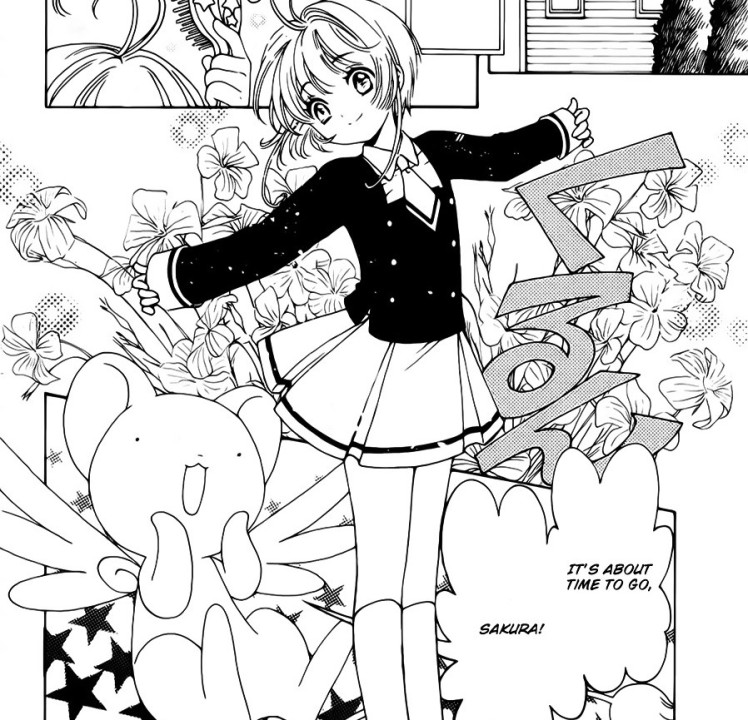 The Clear Card Arc continues the story of Sakura Kinomoto after the end of the last series. Syaoran had left for Hong Kong after she had finished turning all of the Clow Cards into Sakura Cards and Eriol’s plot arc came to a close. All of the side characters who possessed magic to some degree — including Eriol, Mizuki-sensei, and Syaoran — have left Japan, leaving Sakura with her toy-looking guardian Kero-chan and dual-natured other guardian Yuki/Yue to protect her and the cards. All of the troubles of the previous season have passed and Sakura must grow up and move on to new experiences at middle school. Yet, even as she contemplates putting away her magical key, a mysterious figure appears in her dreams, her Sakura Cards suddenly turn transparent, and her wand changes to match the new cards that are suddenly appearing. She will have to call again on the help of her friends Syaoran and Tomoyo to puzzle out this new mystery. 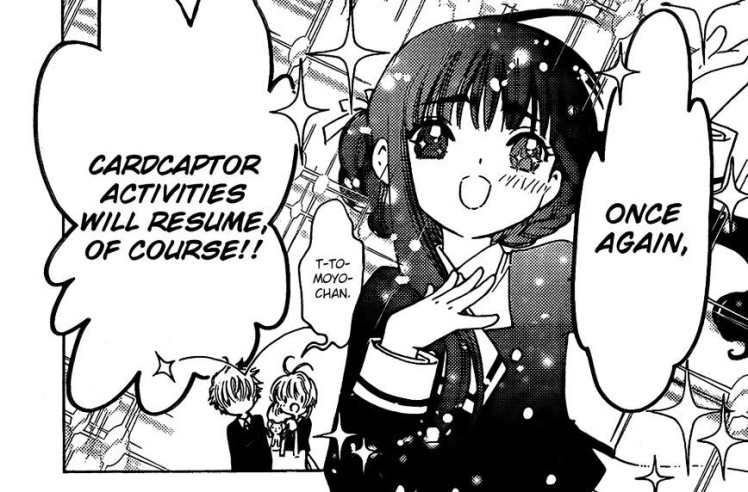 CLAMP has been a mainstay in the manga industry for decades, giving us some great series like Magic Knight Rayearth, Tokyo Babylon, and Chobits. Their history is interesting in that they started as a doujinshi circle in the late 80’s made up of seven high school girls. With the advent of their first serial, RG Vega, they quickly took off to become one of the best studios, and produced what I consider the best magical girl, young romance to date. This is not nostalgia talking either. I’ve tried again and again to watch shows like the original Sailor Moon, Tokyo Mew Mew, Shugo Chara, magical girl shows that I honestly used to like during my childhood and none of them have held my interest as long as Cardcaptors has. The team at CLAMP have above all produced creative stories that resonate with young girls backed by solid art. 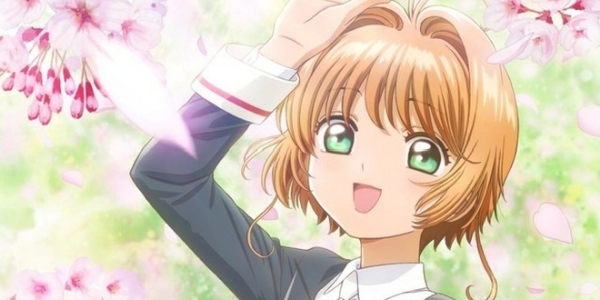 When I saw the announcement for the new series, I was both excited and worried. Excited that I might get a continuation of one of my favorite magical girl series as well as young romances. Worried because it has been 17 years and the story had a fairly wrapped-up ending especially with the addition of two movies. As of now, we have about 12 chapters of the new manga out and not too long to wait for the anime and prequel OVA. I would have liked to wait a little longer to see how the manga plays out, but I think the current chapters have given me enough to talk about and enough content to at least compare it to the previous series. Once it gets farther in, I’ll probably do another full review. 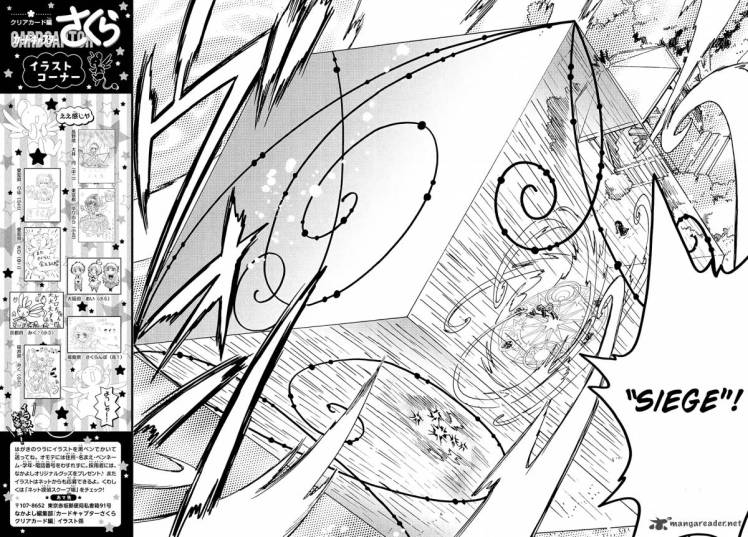 But for now, let’s start with the bad. One of the main draws of the Cardcaptors franchise is the cards themselves. I myself still have the book of Clow Cards sitting at home. With the Clear Card Arc, the magical cards that Sakura captures and uses have been changed in style and modernized to fit the times. In a way that’s a good thing, appealing to a newer and younger audience. However, how it was implemented is a little questionable when we look at the designs and intended magical uses of the cards themselves. Take one of the first cards Sakura captures: Siege. This card’s purpose is to surround and contain. The design is a plain box with wispy vines. In this instance, the meaning of the word siege doesn’t quite match up to the intended usage. A siege surrounds, repeatedly attacks, and seeks to weaken an opponent. As far as I can tell, the Siege card only contains and holds something. The meaning is close enough that it probably won’t bother too many people, but to me it feels like they are reaching a little bit for new ideas for cards. Given that we have no idea how many cards are left — it could be the same amount of Clow Cards — I hesitate to think what ideas they have in store for the rest of the cards. 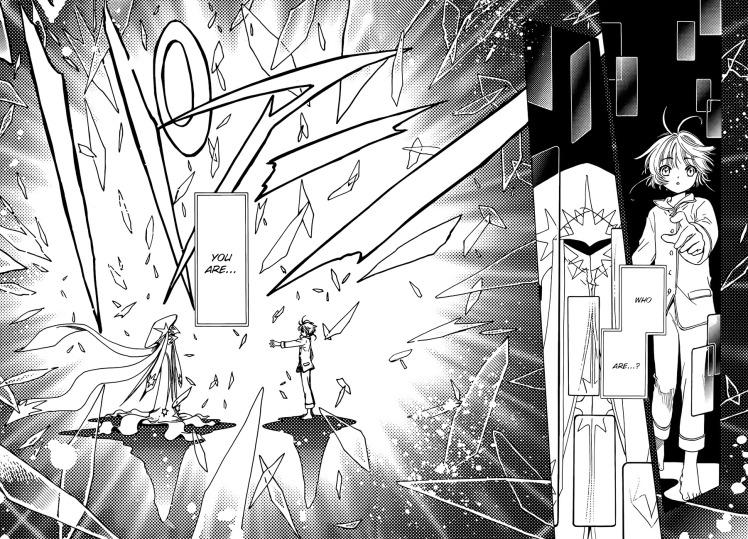 In a similar way, the appearance of the mysterious magician and the new transfer student to their school who inserts themselves into their friend group reminds me a bit too much of Eriol’s story. It’s still early so I could be wrong in where I think it’s finally going to go. Right now, though, all of the signs are pointing to something we have seen before for the most part. It will be interesting to see if and how they make it different besides the clear cards, but from what I’ve seen so far it’s a bit too predictable. I also understand that this series is supposed to be for a new and younger audience, yet for those returning to the series, a repetitive major plot could be a turn-off. 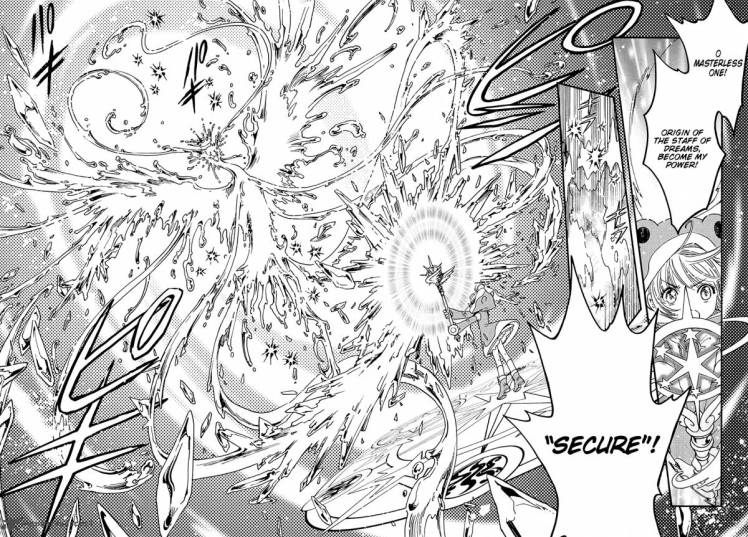 Luckily it looks like the good may outweigh the bad for this series. As I’ve mentioned above, CLAMP has always been strong when it comes to art, and that is no different for this series. In fact, I think the art got better which makes sense given the long interlude between them. I feel like the slight change in art has given Sakura a more mature look, while also adding more details to the improved line art. This means that scenes where Sakura is capturing cards are more detailed and exciting to read. In addition, the moments where her and Syaoran are together can seem more heartfelt with better values and effects. The one thing that may be a bit overdone is the amount of flower effects used in this series versus the last. 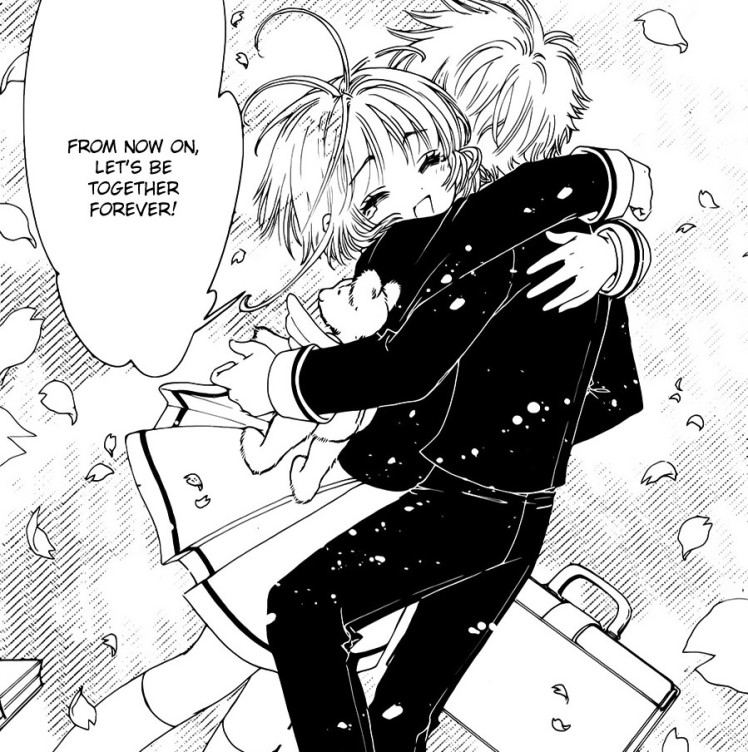 What I am also excited to see is how Sakura and Syaoran’s relationship is going to progress now that we are at a point where they are finally together and more mature. Romance was and still is an important part of the Cardcaptors series, and I can’t see that changing. With the series starting off at the beginning of their relationship, it will be interesting to see what kind of things they learn about themselves and about being together especially considering how secretive Syaoran is being about the new cards. That could wind up being a point of conflict for many reasons. Similarly, we also have the relationship of Toya and Yuki to think about as well. I am almost positive it will just be something hinted at in the background given the nature of the audience this manga will be marketed to, but I can still hope for something. CLAMP had a long history of writing yaoi before they moved onto professional manga development, so I am fairly confident that whatever they decide to do with those two I will be happy. 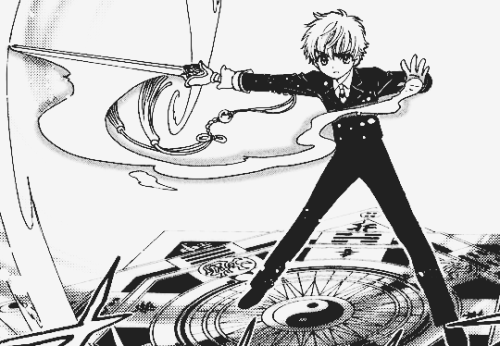 Finally, we have the new anime coming out in January that will certainly be getting a lot of hype from Cardcaptor fans. After watching the full 70 episode original anime again not too long ago, I’m excited to see how much the animation quality will improve. From the trailer, it looks like it will be quite a lot, allowing the series that will most likely be built on the back of nostalgia to feel fresh and new. We also apparently have a prequel OVA that is intended to connect the content of the end of the last series to the beginning of this one. This could be interesting as well, but I have no idea what the content of that might be except for maybe a focus on Sakura and Syaoran’s long-distance relationship. That may in-fact be one of the best ways to go, and if possible I’d like to see a bit more of Syaoran’s magic given his improved abilities in the manga so far.
Either way, good or bad, I’m am still super psyched for the new series and will probably be talking about both the new manga and anime once they come out. Let me know what your impressions of the new series are in the comments below! Do you have any reservations or concerns for the new series? Anything specifically you’d like to see?