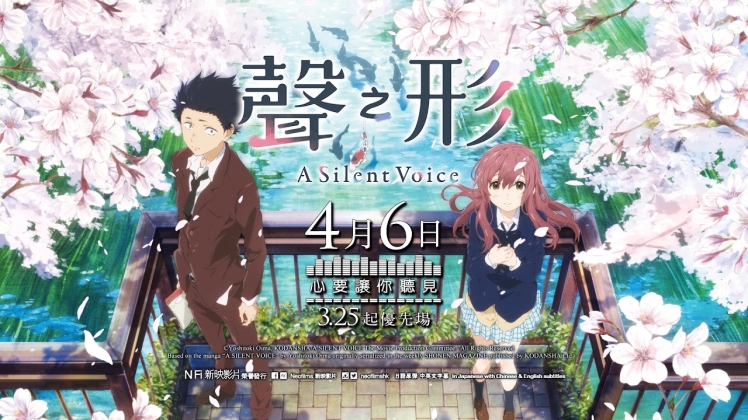 I’ve been meaning to check out A Silent Voice ever since I heard it was coming to the States this year. It looked like it could be a fantastic movie that could rival Your Name for the top spot in the box office, and it wound up being that both of those things came true. A Silent Voice hit theaters in Japan in September of 2016 to a very positive reception, and hit number two in the box office, right behind Your Name. By the end of 2016, it became the 10th highest grossing Japanese film of the year, with Makoto Shinkai — Director of Your Name — calling it a “fantastic piece of work.” However, what drew me to this movie was the concept, the story of a former bully and the young deaf girl he used to bully coming to forgive each other, both seeking redemption for how they’ve changed each other’s lives. And, after I learned that the director of this movie is none other than Naoko Yamada, Director of K-ON, a lot of aspects of this movie fell into place.
Shoya Ishida walks along a bridge as he contemplates suicide, flashing back to the time he was in elementary school. His teacher had just introduced a new student to the class, Shoko Nishimiya, who they found out soon after is deaf. And so the bullying started, led my Shoya and helped along by the general willingness of the rest of the class to ignore them. But after Shoko’s mother finds that all her hearing aids have gone missing, Shoya and his mother are made to pay nearly 1,700,000 Yen to replace them. From then on, his class turns against him and he’s left by himself to wallow in regret and anxiety all the way into High school. But when Shoya works up the nerve to return Shoko’s lost notebook to her in an effort of redemption, he comes to find out that all she wants is to put the past behind her.

With animation by Kyoto Animation and directing by Naoko Yamada, A Silent Voice is filled with so many great moments of cinematography and art. However, what really surprised me was the opening song. They chose to use “My Generation” by The Who which was fitting but contrasted hugely against all the other music in the movie as well as the setting. It did work pretty well for the opening, creating a nostalgic atmosphere that set the tone for a movie devoted to looking back on past events and mistakes. I would have loved to have seen a little more of the same type of music scattered throughout the rest of the movie though. That’s easily overlooked, though, given the high quality of animation that Kyoto has managed to provide for this movie. The backgrounds, characters, and movements are all great, and I would say they almost rival Your Name in quality, but not quite.

On the other hand, when it comes to displaying emotion through cinematography, Naoko Yamada has her own unique method that some of you may remember from K-ON: leg or lower-body shots. There are quite a few shots in this movie where all you can see are the characters legs as they move, interact, or talk with one another. Yamada doesn’t have to rely on facial expressions to show emotion or show what is happening in a scene, she makes us pick it up from body language. This is something that, in my experience, very few directors do, falling back on facial expressions and dialogue to convey personality and emotional interactions. After paying attention to a few of these shots, we can begin to learn a little bit about each character. Turned in legs could mean shyness just as the different ways they walk can say something about their overall personality. Longer strides, how high they pick up their feet, if their feet turn in or out, these are all ways to pick up on some subtle characterization, and it is something that Yamada excels in using.

The story itself is based off of a manga written and illustrated by Yoshitoki Ōima, and I must say that the story alone makes this movie a contender for top spot on my list. Discussing issues of suicide, depression, bullying, disabilities, and regret, A Silent Voice makes quite an impact. I’m not ashamed to admit I cried like a baby while watching this movie it was that good. The movie starts off with Shoya contemplating suicide as he walks along a bridge, flashing back to the cause of his regrets. We learn that he was a bully in elementary school, singling out a young deaf girl who didn’t quite fit in with the rest of the class. After throwing millions of yen worth of hearing aids away, he is finally caught by the teachers. In the process he tries calling out some of the other kids in the class for their role in it, but winds up only becoming an outcast himself. This movie speaks plainly about the nature of bullying and social psychology, showing Shoya’s actions get turning back on him in the end at a sort of punishment both for his bullying and for turning on his friends. But, in a way, it also a process of growing up, seeing that there are consequences for what you do, especially when he sees that it’s his mother who must face the consequences of his actions. We also see his dislike of her difference turn into something like interest as he begins to learn sign language to either eventually communicate with her or as a start towards possible redemption and forgiveness.

Besides suicide, A Silent Voice has many powerful discussions of mental illness from depression to anxiety all revolving around what happened in their childhood. We see this the clearest with the large X’s that appear over people’s faces through Shoya’s eyes. It becomes a distinct representation of his anxiety that grew from the rejection of his peers and his shame over his past actions. He begins to believe that everyone in school thinks poorly of him and that past shame makes him think he doesn’t deserve friends. It is only through the determination of one classmate that the X’s begin to fall off the faces of the people around him.
I wish I could talk a little more about this movie, but I’m afraid I’m going to start spoiling things for everyone that hasn’t seen it yet. If you haven’t seen it, I highly suggest you do. I can tell you right now, this movie is probably going to be ranked higher than Your Name for me when I compare the two stories and cinematography to one another. Overall, A Silent Voice is a great movie about growing up, dealing with the regrets of the past, and building friendships and love.

One thought on “A Silent Voice Anime Film Review”