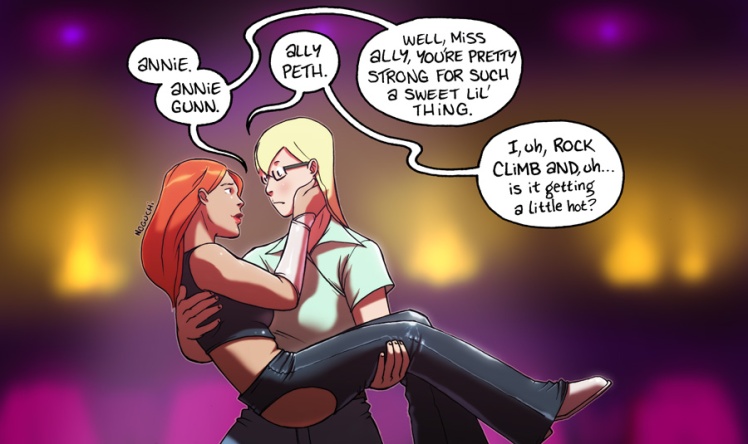 Jamie Noguchi has to be one of my favorite webcomic artists, up there wit Yuko Ota of Johnny Wander who I’ve talked about multiple times already. Noguchi has been involved in a lot of great projects, in and out of comics: the Super Art Fight Show, the Fucking Do It support network, and a ton of other art stuff. Chief among them for me is his work on the webcomic Yellow Peril, which he markets as an Asian American Office Romance Comedy. All of those words fit the series perfectly, and Noguchi shows his art and storytelling skills in interesting ways that really add to both the appearance and flow of the comic. If you haven’t already checked out my Top 5 Romance Comics list, you should do so, as Yellow Peril appears as the only honorable mention (which is basically number 6). It earned this spot for some very good reasons that I’ll be getting into more below, but to even make it onto that list, a comic has to combine creativity and storytelling to make something truly unique.
Yellow Peril is a webcomic that typically has around 4 to 5 panels, but has been known to feature more depending on the plot line and art style used. The story itself follows three co-workers who all work at the same design company, Penticorp, and are generally dissatisfied with their jobs. When the opportunity presents itself for them to form their own small design company, they quit their jobs and strike out on their own. The webcomic continues to show their struggles with work and romance as well as their love for good food, kung fu, and spontaneous dance-offs.

At the start, one of the parts that I love most about this comic is the way that Noguchi plays with different art styles as a way to express emotions or important moments. Most of the time this involves referencing old Japanese or Asian art styles reminiscent of woodblock prints. In moments of extreme anger, for example, one of the main characters (mostly Kane) would transform into a character right out of a Hokusai print. These shifts in style are great for emphasis and really signals to the reader just how strong their emotions are or how important a scene is. In a similar vein, I would say that Noguchi’s use of light and dark allows him to create scenes of powerful drama. This has included panels that switch to silhouettes or scenes where the shadows are increased to emphasize tension or introspection. It’s in these moments where we see just how art and a shift in style can mean so much to dramatic storytelling.

Going beyond art style, there is also panel composition and the use of distance that can add to the meaning of a story or certain scene. Noguchi plays with the use of distance and close-ups to give a deeper meaning to a collection of panels. If a character is feeling left out or made to feel like they made the wrong decision, shrinking their figure into the distance can be a good way to draw that feeling from the panels. In contrast, if there is an especially romantic moment between two characters, Noguchi might give us a close-up on their faces or hands to convey a sense of intimacy. His use of these techniques combined with the shifts in art style lends a certain amount of creativity to what could be seen as a pretty simple office rom-com. 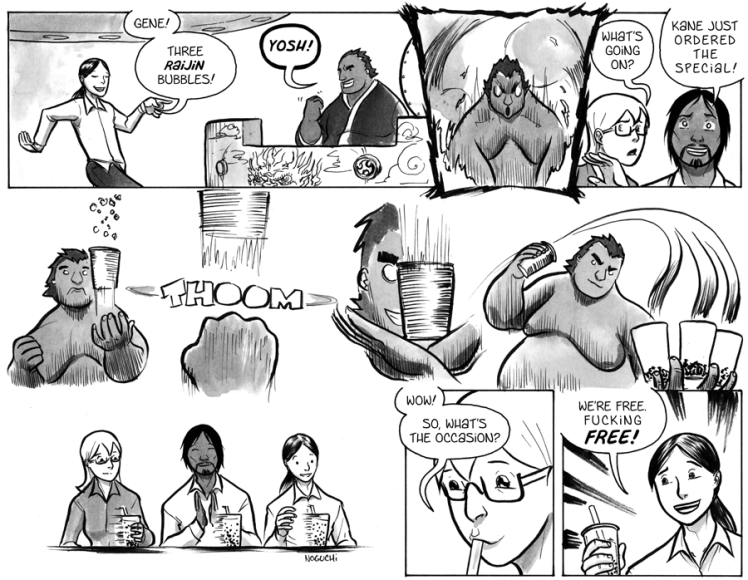 However, when we dive in and take a look at the story, it becomes more than your standard rom-coms, giving us interesting and creative characters who become the backbone of the series. Such characters as: the nerdy yet creative Kane, the kung fu gay porn actor Lance, the bisexual rockclimber Ally, and the martial artist chef Julie. Their differing personalities lend well to the kind of hijinks that happen throughout the comic. You can especially see Noguchi’s love of food, giant robots, and kung fu movies shine through the story, especially when it comes to Julie’s arcs. These passions make for a varied and interesting story that delves into both the serious and the humorous in a balanced enough way that not one aspect feels more prominent than the other.

In terms of romance and drama, Noguchi gives us introspective looks at long-distance relationships, the delicate balance between work and personal life, and exploration of sexuality. The vast majority of this being shown through the character of Ally. But we also get looks at dealing with loss, regret over things you couldn’t do in the past, and how to motivate yourself to do the things that you love. Noguchi’s belief that you should absolutely do the things you are passionate in — personified in his Fucking Do It campaign — shows through in this comic as well. From Kane, Ally, and Bodie quitting a stifling environment to start their own business to Kane challenging himself to continue making the art he loves, Noguchi shows us that there is always a way to put a passion into practice.

The whole of Yellow Peril becomes a comedic and deep look at both corporate office culture and romantic relationships with a sense of uniqueness brought about by Noguchi’s personal style. I’d love to see how far this comic goes in the future as their business and their relationships grow. I also can’t say enough about the characters in this webcomic. They’re varied, passionate about their own things, and have their own histories that factor into their actions and aspirations. If you have the time to read through archives that go back to the 2010’s, I highly suggest you check out Yellow Peril for yourself. You can also let me know what you think in the comments below or on my Facebook page.