Reindeer Boy is written and illustrated by Cassandra Jean and picked up for publication by Yen Press in 2016. It came to my attention while I was scrolling through the recommendations on the graphic novel subreddit. The concept seemed intriguing: a romance between a girl and mysterious horned boy that shows up at her school. I could see some basic romance tropes already in the description, but I’m always willing to give a new romance story a try. Unfortunately, while the character designs were pretty cool, the story itself left me wanting and kind of disappointed. But perhaps people looking for a something fluffy to read during the holidays, this could be good.

Quincy has the same dream every year on Christmas Eve – of finding a little boy holding a special gift for her under the tree – and every Christmas morning, she’s awoken to find a gift wrapped in tinfoil with her name on it. When school resumes after the winter break, Quincy’s class discovers they have an unusual new transfer student named Cupid. Ridiculously cute and friendly, the new boy has everyone both enamored and confused. Those antlers can’t be real…can they? With Cupid having seemingly set his sights on Quincy, it seems she’ll be having a memorable year indeed! (Official summary from Yen Press) 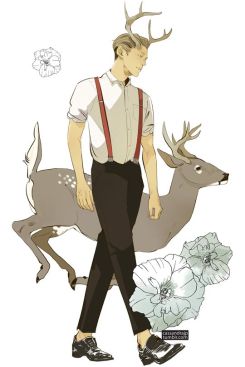 One of the things that drew me to this graphic novel was the character designs. I love when artists cross people or animals with deer or other horned/antlered animals as it produces a nice earthy aesthetic. What Jean did was to base her character designs off of the concept of combining boys with Santa’s reindeer. What we then have are fairly different characters, both old and young, male and female who not only sport antlers but also different skin markings as well. I feel like I would have liked to have seen some more diversity in cast especially in age range and skin tone, but for the most part I can understand her decision to draw them as they are.

Cassandra Jean has a fairly sketchy style in terms of line are and character design. There are times where we’ll see quite a bit of detail in the faces of her characters and other times where it is fairly simplified. The backgrounds range from simple to nearly blank and the clothing of the characters has just as wide a range of detail as well. There are times where I didn’t mind this and actually like how this looks, but there are also panels where I thought there could definitely be more detail added. I do love her linart though as it manages to capture the movement of the characters fairly well with varying degrees of line thickness.

The story I think is where this graphic novel starts to lose me. Like I said above, I think this would be good as a fluff read during the holidays, but digging deeper reveals some issues and overused tropes. For one, the story is premised on the idea that these cute deer boys transfer into her school in a small town. We see this premise pop up again and again from Twilight to manga. In Reindeer Boy, Cupid is immediately accepted into the school popularity ranking despite the fact he’s named Cupid and despite the fact everyone thinks his antlers are just fashion statements. It makes me question whether I should consider this magical realism or not, as Quincy seems to be the only one that questions the nature of his antlers. The story and character designs also follow the typical harem-esque trope of all the characters are cute boys and girls including Santa. Why? Why is Santa sexy? Just because? Okay, I guess I can accept that to a degree.

Also Quincy seems weirdly okay with the fact that she has antlers growing out of her head and weirdly okay with the reason why she has antlers growing out of her head. I’m hesitant to give spoilers, but in terms of problems I have with the story this is one of the main ones. Basically Cupid was granted a wish by Santa that Quincy would join them, meaning she would start growing antlers. Why is she okay with that? Would anyone be okay with someone wishing they’d grow antlers out of their head, or is Quincy more okay with it because of her love of Christmas and fascination with the reindeer family? I know I’d probably not be okay with a major bodily change like that.

However, there are some things I do like about Cassandra Jean’s story, mainly with the background and history she provides on Santa and the reindeer’s world. She gives us an insight into how Santa’s delivery business works and how the reindeer family and lineage works. For example Cupid is an inherited name and the current Cupid is the first male in his family line to work for Santa. There’s also a pretty cool reindeer temple they visit later in the novel that looks interesting. If Jean ever revisits this I think it would be pretty interesting to delve deeper into the backstory of the reindeer families.

So, if you’re looking for a fairly light read for the winter months, I would suggest giving this a try, but I wouldn’t go into looking for a deep story or highly detailed art. If you’ve also read this graphic novel, let me know what you thought in the comments below.