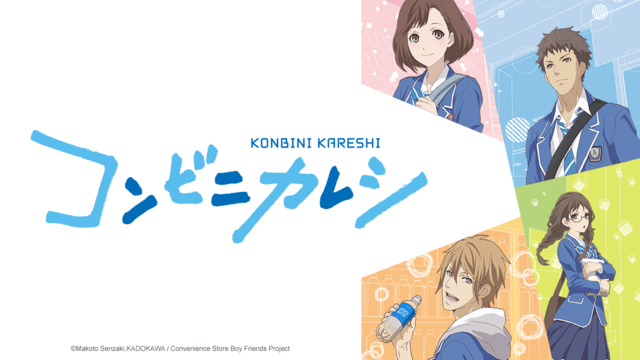 Konbini Kareshi was one of those animes that I wound up dropping after about four episodes last season. I decided now was probably a good time to revisit what made me drop it and find out if it actually got any better in the following episodes. Short answer: not really? It’s an anime with a lot of problems that tries so hard at being good, but ultimately pales in comparison to others that have taken its concepts further. I mentioned in my Summer 2017 First Impressions that this is primarily a fluffy and easy watch in terms of romance, but ultimately feels dull if you’re looking for something more, and I’m going to stand by that assessment for this review.

The story centers around a group of four friends who always stop at a convenience store on their way home from school and the relationships that develop from chance meetings. It continues to follow these four high schoolers, two girls (Mashiki and Mihashi) and two boys (Mishima and Honda), as they make their way through their last years of school and the troubles that come with it. It started as a multimedia project by the publisher Kadokawa, first  as a mook (or like a cross between magazine and book), then a bundled drama CD, before being picked up for animation by Studio Pierrot. The simulcast was licensed by Crunchyroll and ran for a total of twelve episodes.

Studio Pierrot has a very long history in the animation business, having produced some of my favorite shows including: Yu Yu Hakusho, Great Teacher Onizuka, and more recently Polar Bear Cafe. However, with their work for this animation, I do think they dropped the ball when it came to a lot of aspects. The backgrounds in the show were certainly amazingly detailed, and I found myself loving the shots of the characters walking through the park among the hydrangeas. But when it comes to the facial expressions in almost every scene, they leave me wanting. I feel like the characters had way too many moments where they are just expressionless while they talk. It is similar to looking at a static image where only the mouth moves. In moments where they are supposed to be excited or happy about something, that enthusiasm in the voice actors never reaches their eyes when it comes to the animation. I think this is one of the main reasons why I found the characters and anime fairly boring. Animation quality plays a key role in my enjoyment of any show. 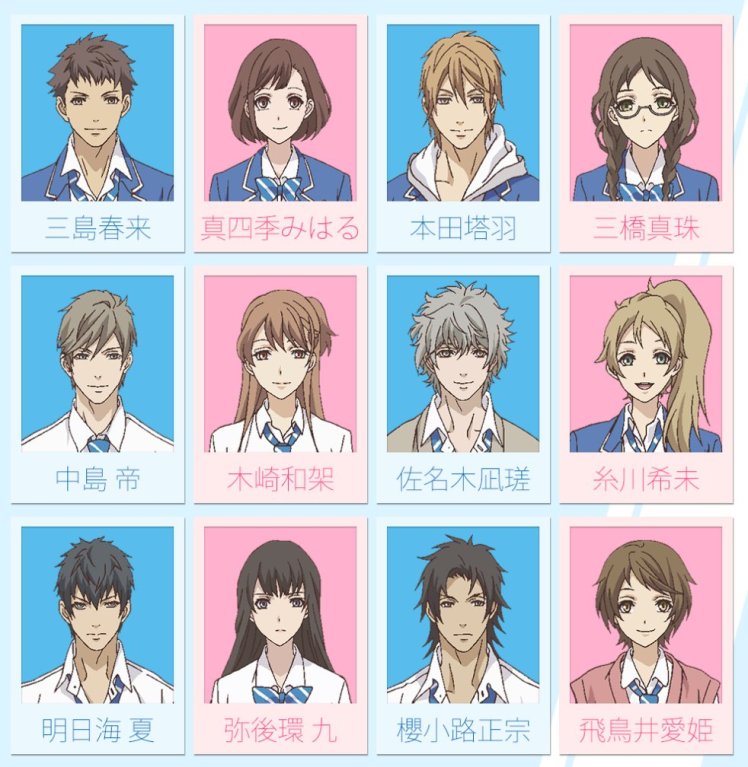 As far as the story goes, it is fairly fluffy and seems to only pick up the pace around episode five or so. For an industry and audience that relies heavily on the three episode rule, they really should have had more hints to the main story earlier on. That might have kept me watching past episode four even if the story as a whole felt lacking. One of the main issues I had was how they treated their cast of characters. In the opening, we see not only the main four but an extra four characters on top of that. They’re introduced throughout the series, with back stories all their own, but then they just kind of get pushed to wayside. I think it was pretty detrimental to the story overall to try to incorporate four extra storylines to an already short twelve episode run. They definitely did not have time to go into each story. 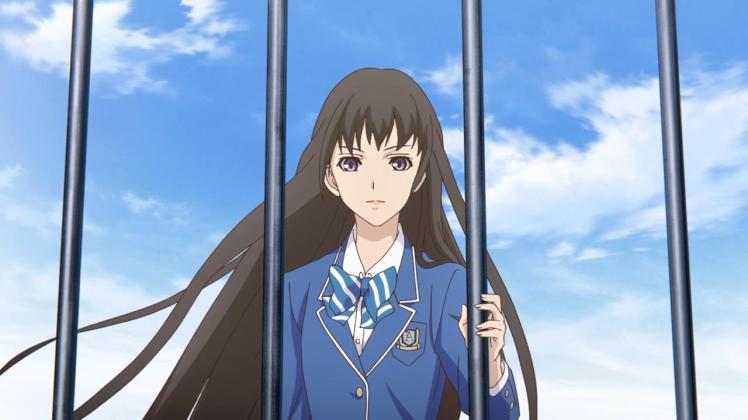 Take, for example, the characters Natsu Asumi (the track athlete) and Kokono Minowa (the librarian). There’s obviously a story there and they definitely hint at it with her leaving food for him outside the door or intervening when he’s getting beat up. It seems like they’re supposed to be a bigger character than they are. After about halfway through the show though, they both kind of disappear. Then we have the characters of the Student Council President and his “sister.” We’re told that he doesn’t think of her as a sister and are left to wonder if this is supposed to be an incest storyline or if they aren’t actually related and she just calls him brother for another reason. We get a bit of resolution on their storyline at the end of the series, but again, I’m left with more questions than answers. It might be that they go more into the stories in the mooks, but I still feel like an anime should be a self-contained story that can stand on its own to some extent. 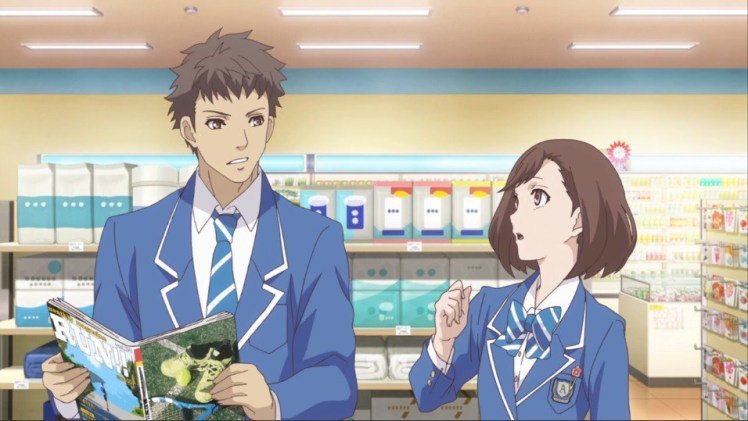 However, this feeling isn’t really confined to the supporting characters either. I genuinely feel that Mashiki and Mishima could have used more work on their characterization as well. We get the most growth and characterization from the other two main characters, and really only see the majority of Mashiki’s growth towards the end of the anime. After I was done watching all twelve episodes, I still felt like I didn’t see that much growth, if any, from Mishima. He struggles a bit with his feelings for Mashiki, but I never felt that it was anything serious, that the relationship wasn’t going to work out in the end, or that he was going to come to the conclusion that he didn’t actually love her even after the big reveal. 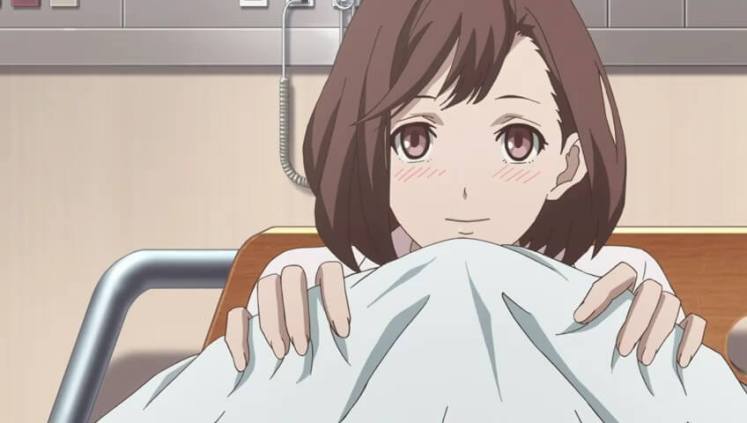 Which brings me to my next point, which may contain a few spoilers, but I feel it’s necessary to talk about: Mashiki’s storyline. It’s revealed towards the end of the series that she has a weak heart and has to get surgery. There is one moment where she passes out and has to be in the hospital or moments where the characters are wondering what’s wrong with her. We get hints that she may have some health problems around the time of the sports festival, but never enough to guess at how serious it is. Maybe it’s just that fact that I still remember how Your Lie in April handled a main heroine with health issues that I feel this series in lacking. I didn’t feel that suspense or that sense of drama surrounding her illness, even after she went into the hospital. They do try though by showing her nightmares, but after seeing a series do it so much better, I just can’t get into Mashiki’s

Let me know what you thought about Konbini Kareshi in the comments below! I’ll be posting a new blog update next week as well that involves what’s happening over December, so keep your eyes out for that. Be sure to follow me here or on Facebook to get the most recent updates, and check out my MAL account in the About page to see what I’m watching this season.