Little Gods — much like Blue that I reviewed a week ago — was something that I found at Massachusetts Independent Comics Expo (MICE) last month. I have to say, I don’t regret picking this up. I was a little skeptical of the art style, but I’ve found the comic to be pretty interesting overall. It manages to utilize Native American creation myths as a jumping off point for its own story of adolescence and discussions surrounding family and queer romance. As someone who loves both mythology and watercolor artwork, it was pretty much a done deal that I would find at least something to like about this comic.

Created by Leda Zawacki and published by Tinto Press, this single volume comic not only contains the story “Little Gods” but also its prequel “Sky Gods.” The prequel follows the Northwest Native American creation myth Shasta Mountain and the Grizzly Bears, using most of the original text. “Little Gods” diverts the story to focus on the Sky God’s eldest daughter as she dreams about descending the mountain to see the world her father created. After a failed kidnapping by a bunch of wind monsters, the eldest daughter — nicknamed Bunny Girl for her distinctive bunny mask — finds herself at the base of Shasta Mountain, free from the watchful eye of her father.

Zawacki’s art is fairly simplified, almost children’s book-esque, but I think that plays nicely with the fact that the story itself is based off of a creation myth. The stylization of the characters is unique in that she relies on limited detail yet has created character designs that are easily differentiated. You can even see in the back of the version I have the many different versions the main character went through before Zawacki finally settled on the one we have now. I especially love the times when she is wearing the bunny mask. I feel like it produces a nice contrast not only in color but also in concept. A full-size girl wearing a fur cloak and a bunny mask makes for an eye catching character. There are of course moments where the style of the comic felt like it could almost use a bit more detail. I get that the Sky God is a deity and therefore doesn’t have to subscribe to traditional character designs, but I still felt like his plain green body with antlers was a bit too little in comparison to the rest of his family.

One of Zawacki’s other great strengths is her use of watercolor throughout the comic. The earthy tones fit well with the mood of the story, which primarily focuses on the wilds around Mount Shasta. I saw it the clearest in one of her full-page splashes where she shows a fox eating a rabbit by splashing red across the page with only the outline of the fox’s face on the page. There are also moments where she shows character’s emotions by filling their character’s outline with color. For moments where Bunny Girl is feeling love or contentment, her body fills with a warm, earthy red, all the details washed away, leaving just the outline and color.

The story itself follows the Modoc creation myth Mount Shasta and the Grizzly Bear, which you can read here. The prequel — “Sky Gods” — follows the text of the myth fairly closely. Where the story begins to divert is a little bit after she is blown off the mountain by the wind monsters and begins to live with the grizzly bears. It’s here that Zawacki takes creative liberties and morphs the story into one of queer romance and finding independence. One of her main additions is the character of Raven. A girl raised by the opposing creation goddess to the Sky God. Her and Bunny Girl wind up forming a friendship and conspire to steal the Sky God’s magic book of creation spells. And despite Zawacki’s detour away from the original story, the plot still reads like a Native American myth. Raven and Bunny Girl and their respective masks make me think of the various animal myths about tricksters that pop up in almost all Native American myths, and perhaps that was the idea. The new myth that she has created reads like something that would fit in well with the modern times and could even serve in drawing people to reading more of the original myths. I’m always in favor of more attention to older mythologies where some of the most interesting stories hide. 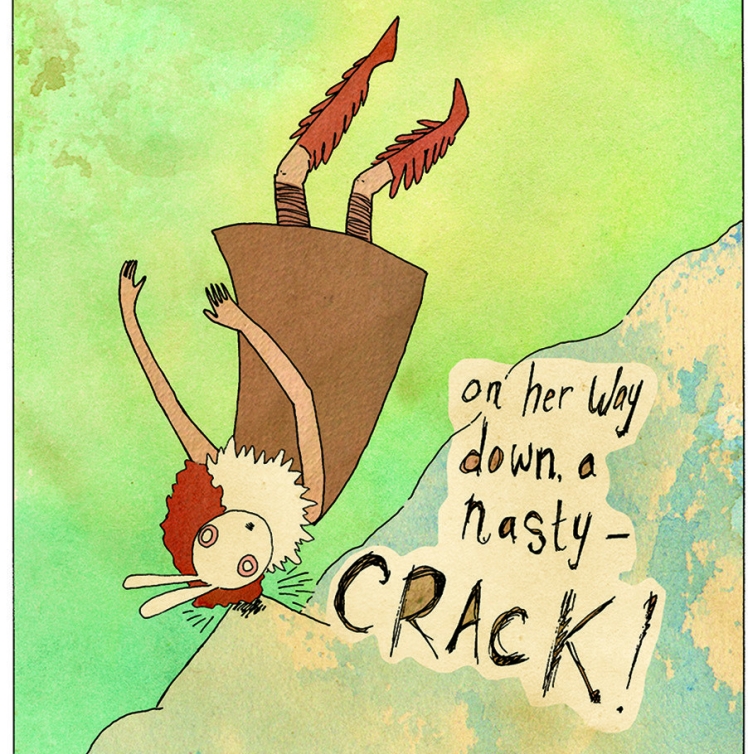 Little Gods’ themes seem to mature quite quickly, going from discussions on family relationships to romance to birth and death. This is probably one of the main differences between typical mythological stories like the original tale of Mount Shasta and reworking of those tales like we have here. For the most part, myths are fairly short, where the characters learn a specific lesson or face a specific problem. The theme of the creation of life runs throughout the comic, but we also see Bunny Girl facing a controlling father, giving in to her curiosity about the outside world, gaining independence, learning about love, and finally creating life of her own. This is quite surprising for a comic so short, and the key to so many ideas working so well in a short time frame is to not spend too much time discussing or going into each problem. The art and the readers can just as easily fill in the blanks and come to the conclusions themselves.

I’m worried I’m going to spoil too much by going much deeper than this. I highly recommend you check this comic out (you can find a link to the publisher’s website here) and when you do, let me know in the comments below what you thought. I have one more comic to review from MICE and then it’s back to manga for a bit. If you have suggestions for either, you can leave them in the comments or over on my Facebook page.