One of my goals for this year and in restarting my use of Twitter was to try and keep myself updated on what’s going on in the industry and better follow new releases from all sorts of publishers. I’ve seen this manga pop up a bunch of times on my Twitter feed from Shoujo Beat, so while I was at Anime Boston, I decided to pick it up and give it a try. Honestly though, I don’t think I’ll be picking up the next volume. It may be that this kind of rom-com isn’t really my thing, but I could see that if I ever decided to read anymore the characters and general premise of this manga would start to get under my skin. I wanted to quickly write up a short review tonight and try and get to the bottom of why I think this way and where exactly this mang may be going wrong.

The Young Master’s Revenge is a relatively new manga — at least in the US — created by Meca Tanaka and published by Viz Media’s imprint Shoujo Beat. It centers around the story of Leo, who at a young age had his pride destroyed by the daughter of a wealthy family a childhood friend, Tenma. After being forced to live abroad in America for a couple years, Leo finally returns to Japan to seek his revenge, especially now that his father’s clothing business has taken off making him heir to a fortune. His plan? Make her fall in love with him and then dump her in the worst possible way. 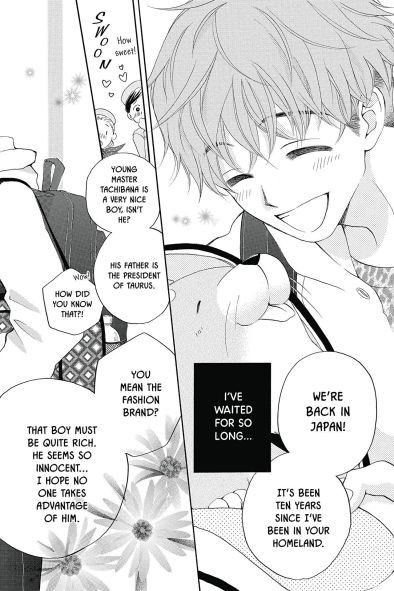 I’m sitting here right now flipping through this copy of the manga trying to figure out what I kind of meaningful thing I can say about Tanaka’s art style and they way she designs her pages, but right now my thought is that it’s pretty average. I know I’ve read and remember enjoying one of her other works, Faster than a Kiss, and thinking back now I can see some similarities between her character designs and style. Her designs are definitely in keeping with standard shoujo mangas: intermittent use of flowery backgrounds, large expressive eyes, and sparkling effects. Her character designs definitely seem to reflect the kind of pretty-boy and rich aesthetic that is fitting for her story, and I do enjoy the designs she came up with, even if Tenma has her mouth open like she’s surprised in pretty much half of her scenes. I do also like how she sets up a lot of her panels and page designs. They wind up not feeling that crowded, but there are still times where speech bubbles and exposition can begin to encroach a little too much on the art.

The major problems I have with this series have to do with the story and the characters. Let’s get down to the basics first. Why should I care about these characters? What part of their personalities, backgrounds, or dreams for the future make them endearing to me to make me want to stick around until the end? So far, I can’t find solid answers to these questions for The Young Master’s Revenge. Let’s start with Leo, the heir to a massive clothing fortune who’s been training himself overseas in order to seek revenge on the girl who ruined his pride back in elementary school. Being the son of a rich family or acting entitled doesn’t necessarily lead to an unlikable character. Ouran Highschool Host Club managed to create a whole lot of rich boys that are fun to watch. I think what makes Leo different is his driving motivations and how he uses or inflicts his entitlement on other people, especially Tenma. I think motivation is a big one for me though, as even a bad character with a strong or relatable motivation can make them empathetic. For Leo, the driving force behind his quest for revenge is that he fell into a pond, got bit on the butt by some turtles, and was subsequently laughed at. He is now so scared of turtles, that the mere idea of them puts him into a panic. Turtles….The reason we are supposed to care about his quest for revenge is turtles. I know this is supposed to be a romantic comedy, but it’s just not relatable enough for me. 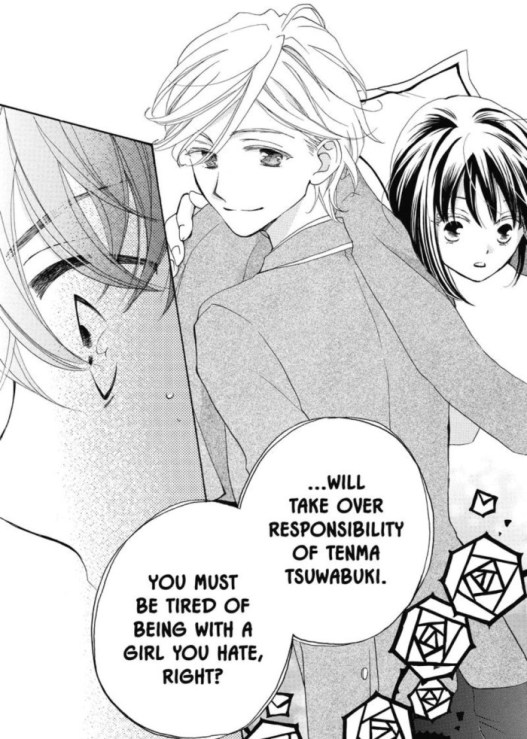 Tenma, while arguably a better character than Leo, is still kind of annoying to me. She’s a rich girl whose been so sheltered over the course of her life that she lacks the ability to take care of herself. She’s ridiculously trusting and kind of a push-over, believing pretty much everything Leo says to her. I like her for the most part, and her dream to be a veterinarian leaves us with something to look forward to, but she can still be pretty annoying at times. I think it becomes the most apparent towards the end of the manga, so sorry in advance for some spoilers. At one point, Tenma gets kidnapped by the Student Council president and locked up in his mansion. Her plans for escape involved smuggling a spoon away from her dinner and wandering around looking for a way out. In the end, it’s Leo that has to come save her, displaying just how much smarter he is than her. In the process, she also finds out that Leo hates her and his real motives for getting close to her, but in the end she comes away from it all saying she’s fine with Leo tormenting her a little bit. Tenma ends up being kind of a frustrating character.

This whole plot reminds me of Masamune-kun’s Revenge: boy gets slighted by girl, boy moves away to train himself up, and then comes back for revenge by making the other girl fall in love with his new-found charm. I wasn’t a huge fan of that series either, but I think those characters had a bit more nuance. In a way though, I can see why some people would like The Young Master’s Revenge, and for a while I waffled back and forth on what I actually thought about it. On my first read-through I did think it was pretty average bordering on boring, but not necessarily bad. On my second read-through I can see the potential in their relationship even if I don’t necessarily enjoy their characters. The light-hearted nature of the series will be enjoyable to a lot of people and there are a few moments of character growth with Leo and Tenma that I can maybe see the second volume becoming better. I guess maybe I just wanted more or that Leo’s PTSD of turtles just threw off the whole story for me.

In the end, I don’t think I’ll be reading another volume of this series. If you’ve happened to have read it, let me know what you though in the comments below. I’ll probably be sticking with some more manga reviews for a while and make sure to keep an eye out for my next long-form article coming probably (hopefully) on Saturday.

Follow me on Facebook, Twitter, and WordPress for all Bloom Reviews content updates and news. New reviews usually go up every Wednesday and Saturday, with news on Sunday and long-form articles once a month.