I’ve been waiting a while for this graphic novel to come out. I saw it mentioned last year I think on Twitter. The announcement was going around and both the title and the cover caught my eye. And yes, this story is exactly as the title suggests. Her boyfriend is indeed a bear, a Black Bear to be exact. It a fun and interesting story that, regardless of its crazy premise, will strike a chord with a lot of women, especially those who have found themselves trapped in a seemingly never-ending cycle of shitty boyfriends. Pamela Ribon and Cat Farris do a great job on the story and the art, crafting something both hilarious and heartwarming at the same time. This will be a fairly short review this time around, so stick around and let me know what you thought in the comments below.

My Boyfriend Is a Bear follows the life of Nora, who has notorious bad luck with men. When she meets an actual bear on a hike in the Los Angeles hills, he turns out to be the best romantic partner she’s ever had. He’s considerate, he’s sweet, he takes care of her. But he’s a bear, and winning over her friends and family is difficult. Not to mention he has to hibernate all winter. Can true love conquer all in this story of girl meets bear? It was just recently published by Oni Press last month and features writing from Pamela Ribon and art from Cat Farris.

Cat Farris’ art is pretty stylized, and the more I flip through, the more I really like it. It’s lose yet detailed, which allows her to show off movement and expressions in interesting ways. I especially love her design for the bear. He winds up being feeling both like a human and an animal through Farris’ use of expressions and body language. This in some ways helps to soften the amount of belief you have to suspend in order to really get into the story. Even though he doesn’t speak a word of any human language, you can pretty much tell what’s going on with his character through his expressions, body language, and general context. It can make for some pretty hilarious moments and even some heartwarming ones. 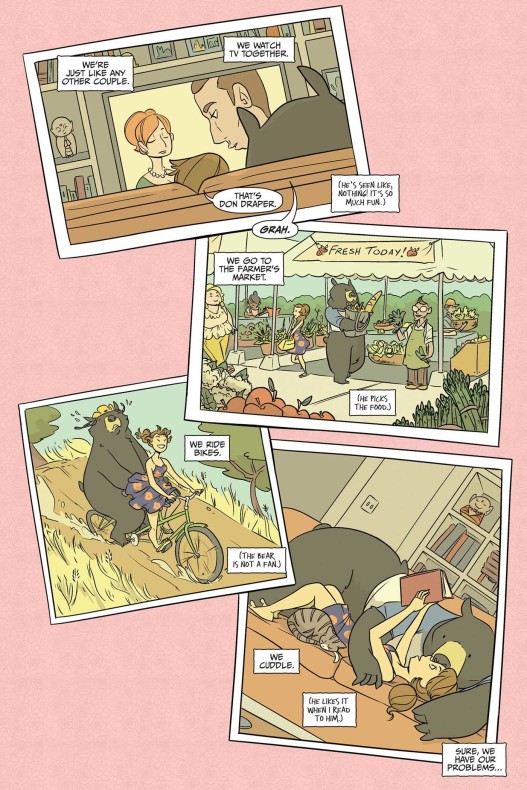 Farris also puts a lot of detail into crafting the designs for the rest of the characters as well. I love the amount of body language Nora has throughout the novel. It really adds to this impression that she’s a fairly carefree and emotionally expressive personality. Then we have the wall of past boyfriends, each one crafted to look both the douchiest and, in some ways, recognizable for their certain brand of douchiness. Later on, she also gets to work with about 4 pages worth of drunken silliness where Farris combines surreal art and comics into some very visually interesting couple of pages.

And it’s not just these pages, it’s pretty much the whole graphic novel that contains some pretty interesting page layouts and panels. One of the biggest ones to mention is when the bear goes into hibernation and we see panels following his life on the bottom and panels of Nora on the top, the two sections increasing or decreasing in size depending on the importance of the scene and the flow of time. It’s a pretty interesting way of showing both time’s passage and how much their separation is always on Nora’s mind. It’s also really interesting visually because Farris brings in a new medium to showcase the bear’s panels, painting everything in dark, pastel purples and blues. Then we have the pages speckled with small panels only containing reaction shots and expressions from characters. Or the full page showcasing and explaining the bear’s expressions and limited language. My Boyfriend Is a Bear is very interesting visually and I really do like a lot of the things Farris has put into this novel stylistically.

The story that Pamela Ribon crafts throughout the novel can — surprisingly enough given the title — be seen as relatable in a lot of ways. It’s the story of a woman who has the worst choice in men and finally becomes fed up with them all. She’s so fed up, and the men are so bad, that even a literal bear is better than them. It’s a hilarious premise that manages to sneak in some truly touching moments and discussions about the nature of love and personal growth. The story still requires some amount of suspension of belief, though we get a lot of that kind of push-back from some of the other characters in the story who can’t quite understand how Nora can date a literal bear, and rightly so. Some of that is solved with him performing more and more human tasks, like being handy around the house, getting a job, and dressing in human clothes. All of these are ridiculously hilarious, but under all of that is the fact that he is still a bear at heart. We see this clearly when he feels the pull more and more of the forest and the need to hibernate.

But throughout their time together, it’s interesting to note how caring the bear can be to her while her ex-boyfriend Ben repeatedly tries to worm his way back into her life. There’s a lot of really great moments in this novel, and I highly suggest checking them out for yourself. In my mind I thought this comic would be more of a lighthearted read, not too serious of a romance, but I think it wound up surprising me in some respects. If this comic looks interesting or if you’ve had a chance to read it yourself, let me know what you thought in the comments below.

One thought on “My Boyfriend Is a Bear Graphic Novel Review”