As the weather gets nicer, I’m beginning to enjoy making trips after work to the comic shop by my apartment. It allows me to get some exercise walking home and lets me check out some new releases. Lately, or I should say for a while, I’ve been on an Image kick, and Sleepless is one of the more recent series I decided to pick up on one of those nice Spring days after work. It’s a pretty interesting series, a young adult, fantasy, romance set in an interesting world and with pretty interesting characters. The series started publishing back in December of 2017, so the story is still progressing through the court intrigue, murder plots, and general backstory in these first issues and hasn’t quite hit the main romance yet. However, I think these first issues should be enough to hook anyone who loves this genre, I know I’m hooked now.

The story of Sleepless follows Pyppenia, or “Poppy” as she’s called, who is the daughter of the recently deceased King of Harbeny. Day and night she is guarded by the Sleepless knight, Cyrenic, who has taken a magical vow to never sleep again in order to protect Pyppenia. But now that her father is dead, her mother back in her home country across the sea, Poppy has to deal with court intrigue, murder plots, and a new King on the throne. The story is written by Sarah Vaughn (of Alex + Ada), with art by Leila del Duca, editorial and coloring by Alissa Sallah, and lettering by Deron Bennett. Currently, there are six issues published by Image with more coming out every month. 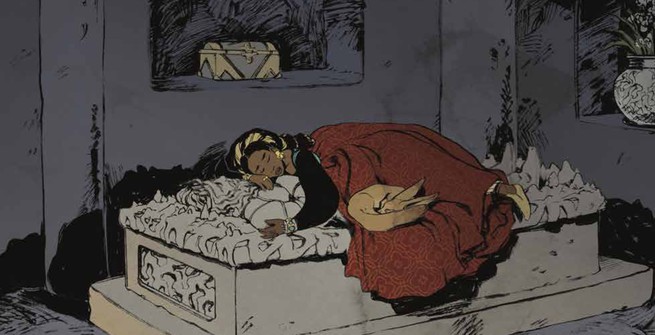 One of the aspects of this comic that has struck me the most over the course of reading these issues is just the amount of creative vision I see in the character designs and world that Leila del Duca brings to life. I love the design for the main character of Poppy. She presents a great representation of a relatable black character, with her natural hairstyle and clothing choices that are emphasized on every page. This relates well to the amount of attention del Duca pays to fashion in this comic. It seems as though she’s done her research on what common fashion choices and designs were present during the time this story is based off of. It becomes pretty interesting seeing the kinds of clothes Poppy or the other characters will wear day-to-day, and I especially want to see more of her mother’s culture’s fashions as they’re more based off of original African clothing. As for some of the other characters, such as Cyrenic, I think his design can look a little awkward sometimes, but that may very well be due to the weirdness of male fashion with its tights and other strangely awkward looking things. It’s not really an excuse, but I can kind of understand.

I do love the watercolor based coloring and the variety of different covers, a lot of them have pretty unique yet nostalgic designs that remind me of older covers from classic fantasy novels. One of the aspects I would like to see improved on though, in terms of art, is some of the backgrounds. There are moments where we get shots of the city or the castle where I feel like it’s supposed to be grand and towering, but it just kind of feels bland. It lacks the detail to really create that extra punch that might have pushed this comic over the edge for me into an absolute must-read. But for now, there are a lot of other features that can outweigh these faults, like the expressiveness of Poppy’s character, the varried designs of the other people in the story, and of course, the little fennec fox, Bini, who is just too adorable. 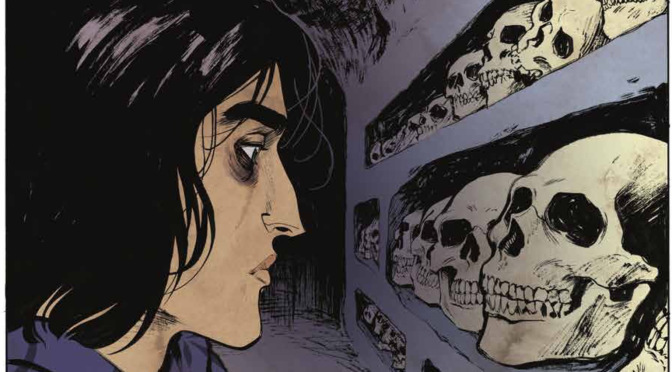 Vaughn’s story, however, is I think one of the main selling points of this comic. She manages to craft a new and interesting world of magic and scheming royalty revolving around a young and relatable character. I’m really looking forward to learning more about the different religions in the story, how the religion of time in Harbeny differs from Poppy’s mother’s religion that’s based on the stars. There’s also the mystery of the Sleepless, knights who, through a magic vow, give up their ability to sleep so that they become the ultimate bodyguards. But their vow has a price, and many of them begin to “drift” or have waking dreams, and when their time is up, they fall into a deep slumber until they finally pass away. It’s an interesting concept that has the potential to produce some great dream sequences as well as opportunities for problems that Poppy and Cyrenic will have to overcome in the future.

So far, in terms of cultural influences, I’m seeing a lot of Moroccan, French/English, and maybe even Spanish in both the character designs and cultural representations such as fashion like I mentioned above. I’m wondering if over the the course of the story, we’ll see more cultures be introduced, though I would love to see more of Poppy’s mother’s culture and the country of Mribesh. However, the main focus has to be on the growing sexual tension between Poppy and Cyrenic and how their relationship may grow or hit snags depending on what kinds of road-blocks his Sleepless vow creates. In the course of these 5 issues as well, we get a good taste of the assassination plot that threatens to kill Poppy, with mystery elements being woven into the story as Cyrenic tries to figure out how and why someone wants to kill his charge.

If any of this sounds interesting to you, I highly encourage you to start reading along with me. I’m predicting more reviews coming in the next couple months, as soon as more issues are released. The next review will be a little more spoilery, so be sure you catch up on the story before reading future reviews. Let me know in the comics if you think Sleepless sounds like your kind of read, or, even better, if you’ve been reading it as well.