Every Friday now I make a trip from work to the comic book store near my bus stop. I follow a bunch of manga publishers on twitter and will usually try and save the names of the ones that look interesting. So a month or two ago, this title popped up on my feed, and when I walked into the comic book store, I decided, what the heck I’ll pick up a copy for myself. The title obviously made this out to be a romance and the cover is appealing as well as the fact that it was going to have at least one shape-shifting wolf in it. I always hope that any chance I take on buying a certain manga will turn out well, and this one definitely looked at least promising enough to give the first volume a try. And I can say that after reading through it twice now that while it may not be a great romance, it is at least an entertaining one with some familiar feels to it.

That Wolf Boy is Mine follows the life of Komugi Kusunoki who is given the option of moving to Hokkaido from Tokyo to live with her dad after a particularly traumatic experience at her old school. On her first day in her new school, she happens to be placed in the seat next to one of the school’s most popular boys, Yu Ogami, whose easy-going personality and exclamation of “You smell good!” both draws her to him and makes her wary. But it’s when she finds Yu dozing under a tree that things start to get weird, because he appears to have furry ears and a tail. Once Yu realizes his secret is out, Komugi gets drawn into his world of shape-shifting animals that also means she’ll be spending time with the most popular boys in school. 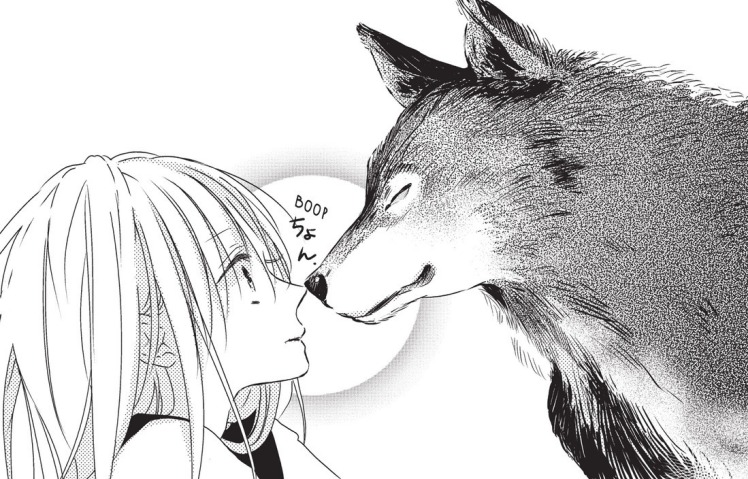 It always happens like that doesn’t it? There’s always something wrong with the popular kids, whether its being a sparkly vampire, being able to transform into a wolf, or turning into the animals of the Zodiac when you get hugged by the opposite sex. It’s almost like people are attracted to the exotic and the mysterious, and those kinds of characters make some of the best romance stories. Yoko Nogiri has tapped into this kind of trend for this manga, to bring us a more fluffy take on this brand of monster love story.

I referenced Fruits Basket here because this manga does give off those same type of vibes, enough that Kodansha themselves have put a tag line on the back cover that reads, “A beast-boy comedy perfect for fans of Fruits Basket.” I don’t think this story will quite go to the same lengths and depths that Takaya took that story, I can definitely see this lighter-feeling story appealing to the same audience. We’ve got a girl down on her luck and some transforming potential boyfriends as well as a history behind those transformations and one monster-boy semi-separate from the others due to his past. So far the story is fairly basic, but it could have the potential of going deeper into the history of the magic surrounding the mountain their living on and the kinds of harassment Komugi had to deal with at her old school. I’m obviously the most interested in seeing the kind of mythology and relationships between characters that Nogiri builds in the next couple volumes.

I do like how Nogiri seems to be moving slightly away from some cliche character traits when it comes to her main lead. Komugi isn’t really a shy girl and she has quite a bit of back bone that she uses to stick up for herself even if the situations she’s in scare her. She faces off with some school bullies, finds out her seat neighbor is a magical wolf-boy, and manages to keep at least mostly sane through it all. I especially like one scene where one of her new friends comments on Yu saying she smells good by saying “Course it’d be creepy if he wasn’t so hot” and her responding to herself “No, it’s still pretty creepy.” I feel like there are too many female leads who would be more than willing to forgive the slightly creepy rather than call it out for what it is. I’m interested to see if that backbone and attitude will continue on throughout the rest of the volumes.

The art is a plus as well. I think Nogiri has a fairly easy art style to like with it’s strong lines and what looks like digital shading techniques. It’s hard to tell if its all done digitally or if the line art is hand drawn and then scanned into the computer for the effects and shading to be added. I wouldn’t be surprised if it was the former. One criticism I do have is that I do think Nogiri needs a little more practice drawing animals. Her animals so far are fairly cute but you can still see some wonkiness with the proportions and lines that make them look a little less solid, especially when you see the wolf on the back cover. But she seems to have a good grasp on character design and panel layout so, I would say overall this manga is pretty visually appealing at least in a way that there’s nothing crazy good or crazy bad going on.

I think I might try and pick up another volume at some point, but I don’t think I’ll be putting this one on the top of my list for a little while. I did find the tory entertaining, but I have a feeling I have a few other mangas right now whose stories are more holding my interest. I can see this as being a nice fluffy romance to read in the future though depending on how the story goes and I do oh so love my youkai and monster stories. We’ll see, you might be seeing another post in the future for volume 2!