Nearly 1 in 4 men and 1 in 7 women have yet to married in Japan by the age of 50 in 2015 according to the Japan Times. That’s a record 23.37% for men and 14.06% for women. It’s one of the biggest worries of the Japanese Government, the fact that young people aren’t marrying and having children, though it’s not like they have lost the desire to marry. Roughly 86% of male respondents and 89% of female respondents to a survey of 18 to 34 year-olds have reported a desire to get married at some point in life. There are a myriad of reasons why this discrepancy is there, but that isn’t what this post is about. This post is about  a manga that draws on the discontent of older unmarried women to create something akin to a Japanese Sex and the City sit-com, using an equal level of parody and drama to create something truly interesting.

Set in 2014 right after the announcement that Tokyo would be hosting the 2020 Olympics, Tokyo Tarareba GIrls follows 33-year-old screenwriter Rinko who finds herself swept up in the fervor and excitement as Tokyo begins getting ready for the games. Unhappy with the fact that her career is starting to plateau and she can’t seem to find a reliable boyfriend, Rinko spends all her free time drinking with her girl friends at a bar, lamenting the fact that none of them will have boyfriends to watch the Olympics with. Determined to change this fact, Rinko makes it a goal to find a boyfriend of quality husband material by the time the 2020 Olympics roll around. Created by Akiko Higashimura, the magaka for Princess Jellyfish, the English translation was just recently published this year through Kodansha. 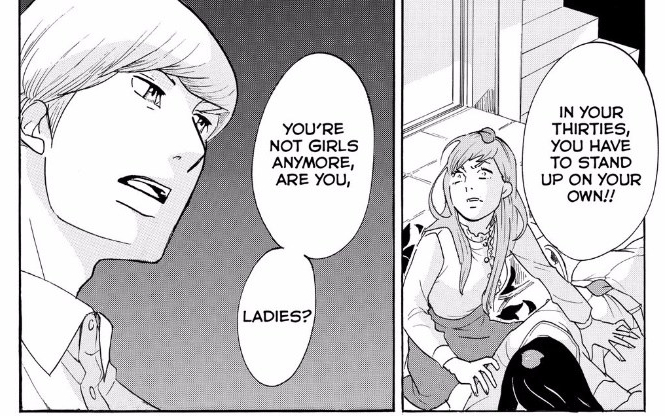 Every time I talk to my single friends now, I am repeatedly struck by how daunting it seems like single life becomes as you get older. I’m consistently grateful that I met my significant other while I was in college, with access to club activities, classes, and events that allowed me to meet people of all different personalities. God, I feel old just saying that, but it’s true. Tokyo Tarareba Girls reminded me of that feeling and of those discussions with some of my friends. In a way, Higashimura is poking fun at the type of women who constantly complain about not being able to find someone but who don’t really seem to do anything about it. It draws on this widespread idea that women have a biological clock they need to beat, and the Japanese cultural idea a women’s duty to family over that of her career. However much Rinko seems to complain though, she does come off as a relatable character who got caught up in her career and generally has bad luck with men.

But I think what really held me interested in this manga, besides the entertaining story premise, was the art. Even though I’ve only ever watched the anime adaptation of Princess Jellyfish, you can still feel the energy that Higashimura puts into her art. The line-art and designs may come off as sketchy and warped sometimes but I think that plays well to her semi-wacky style and the expressiveness of her characters. Rinko has a wide-range of expressions throughout the pages, adding a feeling of depth and a strong level of personality to her character.

Higashimura also has a habit of creating interesting mascots for her stories. In Princess Jellyfish it was Clara the jellyfish. For Tokyo Tarareba Girls it’s talking codfish milt and liver. They have wide anime eyes and appear anytime Rinko becomes hopelessly drunk. It takes the idea of cute mascot characters and sort of flips or twists it in a way. Codfish milt and liver are bar snacks that constantly point out Rinko’s flaws in logic and force her to consider the tough questions even if she’s just hallucinating while trashed at a pub. I’m not sure if it was a way of playing with kawaii culture, but it works in giving the manga a kawaii-mature feel by having something as a mascot you wouldn’t necessarily consider appropriate. It also adds to the wacky-ness of the story and manga overall, seeing the ridiculous way they talk and look. They even have their own full range of expressions that help land jokes and adds to the overall style of the manga.

I’ve never had much of an interest in shows like Sex and the City or Friends, mainly because I find the types of characters on those shows insufferable to watch, even if sometimes that’s the point. In anyone else’s hands I might have felt the same way about Tokyo Tarareba Girls, with its 30-something women complaining about their inability to snag the perfect man while simultaneously judging the available men who have shown interest in them. It’s the kind of story where the premise is to get enjoyment in watching shitty people be shitty in a way. However, I think there’s also the feeling of wanting Rinko to have better and to do right by herself for once. We see her struggling in her job (some of which is her own fault), but also recognize that she’s facing outside forces that actively work against her nature, like the interplay of sex and the movie business.

Akiko Higashimura has a way of crafting expressive and interesting characters in everyday challenging situations, often of their own creation. Her writing style is why Princess Jellyfish remains one of my favorite animes, and it’s why I know I’ll be picking up the second volume of this manga as soon as I can find it. I love the art style, I love the amount of depth she puts inter her characters, and I’m interested to see if or how Rinko grows throughout the series. If you haven’t already picked up this series and are a fan of her previous work, I highly encourage you to give it a try. And then let me know in the comments what you thought! Reviews for future volumes will be coming out as soon as new volumes publish.