“While I’m staring at the instruments, during an unearthly age of time, both conscious and asleep, the fuselage behind me becomes filled with ghostly presences — vaguely outlines forms, transparent, moving, riding weightless with me in the plane. I feel no surprise at their coming. There’s no suddenness to their appearance. Without turning my head, I see them as clearly as though in my normal field of vision There’s no limit to my sight — my skull is one great eye, seeing everywhere at one.

These phantoms speak with human voices — friendly, vapor-like shapes, without substance, able to vanish or appear at will, to pass in and out through the walls of the fuselage as though no walls were there. Now, many are crowded behind me. Now, only a few remain. First on and then another presses forward to my shoulder to speak above the engine’s noise, and then draws back among the group behind. At times, voices come out of the air itself, clear yet far away, traveling through distances that can’t be measured by the scale of human miles; familiar voices, conversing and advising on my flight, discussing problems of my navigation, reassuring me, giving me messages of importance unattainable in ordinary life.” (389) 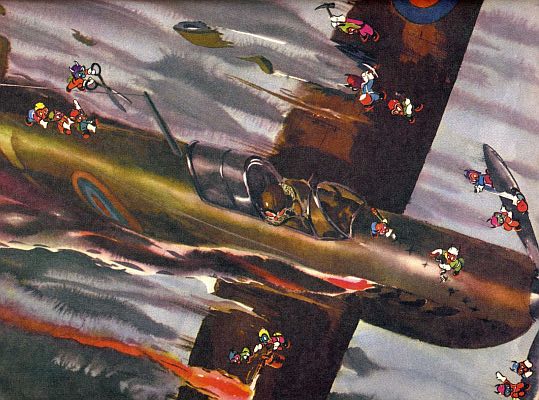 Stories of gremlins or spirits that attach themselves to planes and wreak havoc on the controls and instruments have been around since the pre-WWII era. The above story comes from a very unlikely yet trusted source, that of Charles Lindbergh, the pilot that made the first flight from New York to Paris in 1926. It’s very likely that his visions of spirits gathering in his plane was just a product of exhaustion, but there have been other stories to corroborate his account, some of them even making it into newspapers of the time. But it seems like Lindbergh’s gremlins were the more harmless and helpful kind compared to some other accounts. 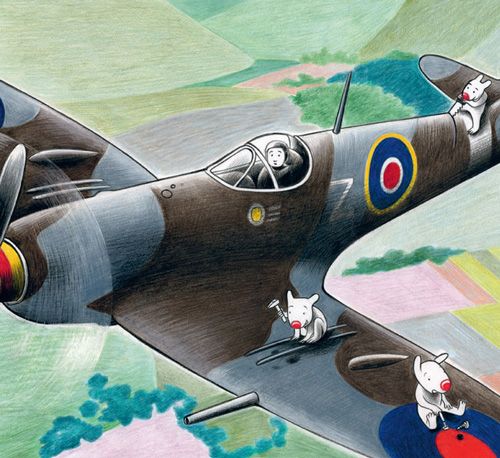 In January of 1943, the British newspaper The Spectator ran an article on a particularly weird and annoying problem many air force personnel were facing: “For it was the old Royal Naval Air Service in 1917 and the newly-constituted Royal Air Force in 1918 which first appear to have detected the existence of a horde of mysterious and malicious sprites whose whole purpose in life was to disconcert pupil-pilot and experienced pilot alike, and to bring about as many as possible of the inexplicable mishaps which, in those days as now, troublz [sic] the airman’s life. Such were the Gremlins, and all ranks of the flying and maintenance personnel of the Royal Air Force have had much experience during the past twenty-five years of their malicious pranks.” 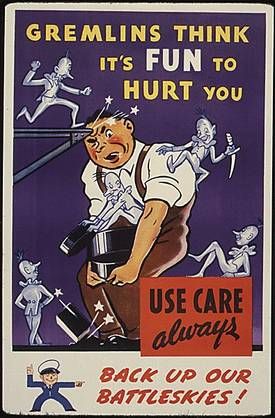 It became such a problem that you could say that the concept of gremlins became a scapegoat of sorts, blamed for all mechanical and technical failures. They even got their own line of safety posters. They may have originated from early folklore accounts of the gnome or elf-like creatures, but gremlins as we know them now had their roots in this period between WWI and WWII, where there are the most accounts of them causing mischief. It’s after 1950, the end of the war, that we see stories of these creatures disappear, probably in part due to the increase in quality of airplane technology and in part due to the silencing of stories among airmen as it was then deemed unprofessional behavior to tell such stories.

The first place I think of when I think about gremlins in pop culture, besides the movie and the Roald Dahl stories, is Looney Toons. It was a specific Bugs Bunny cartoon entitled “Falling Hare”, made during 1943, right in the middle of WWII, that depicts Bugs fighting with a gremlin as it tries to cause havoc on his plane. It’s one of the best depictions of the kinds of stories these airmen were recounting during the time. The depiction of the gremlins is cuter than the common descriptions, with the Looney Toon version having a helmet with plane wings coming off the side as if ears and a little plane tail for an actual tail. Whereas the recorded accounts describe these creature more like imps or animalistic creatures, sometimes reptiles and sometimes with fur, long arms and legs, sharp teeth, and the ability to withstand extreme temperatures while holding onto the outside of a plane.

To me, that Looney Toons episode is one of the most recognizable pieces of pop culture featuring gremlins, but their existence has made it into the modern era as well. You can catch a more recent depiction in episode 47 of Futurama where they show a short called “The Scary Door”. In this Twilight Zone parody you see a brief moment when the man points out a gremlin on the wing of the plane. The gremlin itself appears to look more like a yeti, but it’s up to its usual mischief of pulling all the wires out of the wing.

In the anime and manga realm, the only time I’ve seen a depiction of a gremlin is in The Ancient Magus’ Bride, chapter 20. It’s only for a short one-page moment, but each time I pick up on some little detail in the mythology of this series, I’m always amazed at how much research Kore Yamazaki put into crafting the world and characters. The gremlin in question is found doing what gremlins do best and causing some mischief with a mechanical device, in this case, a washing machine. Chise goes to do some chores and scares it out of the machine, and we see that Yamazaki has decided to depict her gremlin as more of a jackalope, bunny body and tiny horns in all. In a call-back to the original stories, she’s also given him an airman’s jacket and goggles, as if he spends most of his time in and around planes.

Gremlins have to be one of my favorite modern-ish folklore stories to talk about, and to see some of these stories reflected in manga is always fun. I hope you enjoyed reading about this interesting bit of mythology and urban legend, and be sure to let me know in the comments if you know any other shows or comics where gremlins appear. Suggestions for more mythology and folklore topics are also open all month long!