I’m sure you’ve noticed just how much I’ve been talking about XXXHolic, and it’s not just because it’s that time of year when I want to read slightly spooky or mystical stories. The content of XXXHolic hits on a lot of humanity’s biggest fears and insecurities, including the ones from legends and folklore. In chapter 26 of the manga, Watanuki keeps running into a disembodied hand on his way home from buying groceries. A hand sticking out of a cherry blossom tree. A hand lying behind a sandwich sign. At first he brushes it off as a mannequin hand, but when he makes it to the park, the hand is there again sticking straight up out of the ground. As he watches, a small petal falls onto its palm, the fingers close and reopen. The petal is gone. When some kids get too close, Watanuki loses his grocery bag to the hand and it drags it back into the earth where suspicious crunching noises are heard.

Stumbling into this short encounter while reading XXXHolic had me wondering what other kinds of myths were out there concerning disembodied hands, and is this one related to any in particular. I realize it might be a strange thought to have, but hear me out and join me as I go down this rabbit hole. I promise I’ll try and keep it short this time.

There were a few different myths I found in the course of combing through the web, some from Japan and some from other cultures like Native American. The first is the legend of the Manekute no Yurei or the inviting hand from Japan. It appears at night when you’re walking down the hall to the bathroom, a mysterious hand beckoning you from an empty room. Some say it is the ghost of someone who died in that room a long time ago, and they only have enough energy to manifest one hand. Ghosts in Japan are the kind that want something, as opposed to the US where some ghosts can be thought of as imprints of strong energy replaying the same scene over and over again. The Manekute no Yurei will usually disappear if you fulfill the wish they are searching for, and sometimes all they want is for someone to read them sutras and help them pass into the afterlife peacefully. It’s generally one of the more benign ghostly myths out of Japan. In the course of his research on this ghost, Zack Davisson points to the fact that stories only started appearing in a certain ghost encyclopedia, leading him to believe it could be a fictitious legend made up for the purpose of the encyclopedia.

Another legend out of Japan points to the appearance of the Akateko. Akateko literally translates into “red child’s hand” and is described as exactly that, a bloated red child’s hand hanging from a honey locust tree. Why the specific type of tree I’m not sure, but the story goes that people who find themselves walking under the honey locust tree may have a rude surprise when the Akateko drops down in front of their face. This is another ghost that is not really that harmful, and seems to just like to mess with people passing by. The legends also say that it will sometimes appear along with a similar ghost, the Aka Ashi, that enjoys clinging to people’s feet making it hard for them to walk. It seems like the origins of this myth center around specific trees in front of elementary schools, which makes sense since it’s supposed to be the hand of a child.

This next myth is straight out of Columbia and Latin America. It centers on a boogieman of sorts called “La Mano Peluda” or the hairy or furry hand. It’s a story commonly used to frighten children into behaving and settling down for a peaceful sleep at night, but it is creepy nonetheless. The origin story speaks of a man who was either killed during the Inquisition and had his body chopped up and buried in an Indian cemetery or he was a man who was falsely accused of robbery and had his hand cut off in punishment. Either way, the man died and cursed that he would have his revenge on people who wronged him. And so, his hand digs its way out of his grave each night to torment the people he hates, sometimes grabbing the legs of those misbehaving kids who won’t go to sleep. 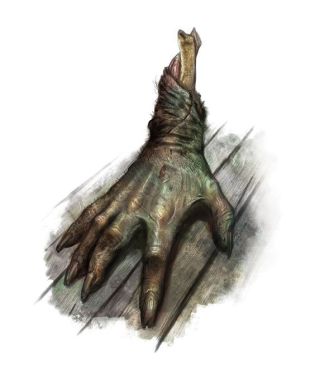 The last one I have for you tonight comes from upstate New York and the Iroquois mythology and is called the Oniate. It roughly translates into dry fingers or dry hand and appears to its victims as a severed hand or forearm, with withered or diseased fingers. Oniate is said to appear to those who behave badly, speak evil of the dead, sow discord, or pry into other people’s business. In some areas is mainly appears as a boogieman of sorts, appearing to terrorize random travelers. The arm can apparently fly too, but if it touches you it is said that the Oniate can inflict you with a disease, cause you to go blind, or kill you instantly. Definitely not something I would ever want to mess with.

I don’t think I have an explanation for the hand that appears in XXXHolic, but perhaps there is a myth I’m overlooking here. The arm that appears seems to grab things and suck them down into the earth so maybe it’s just the visible part of a larger, more dangerous youkai instead of something like the Manekute no Yurei who doesn’t seem to be dangerous. Either way, I had a fun time looking up strange myths about hands across cultures, and I hope you found this post entertaining too. Let me know in the comments if you know of any other disembodied hands stories.