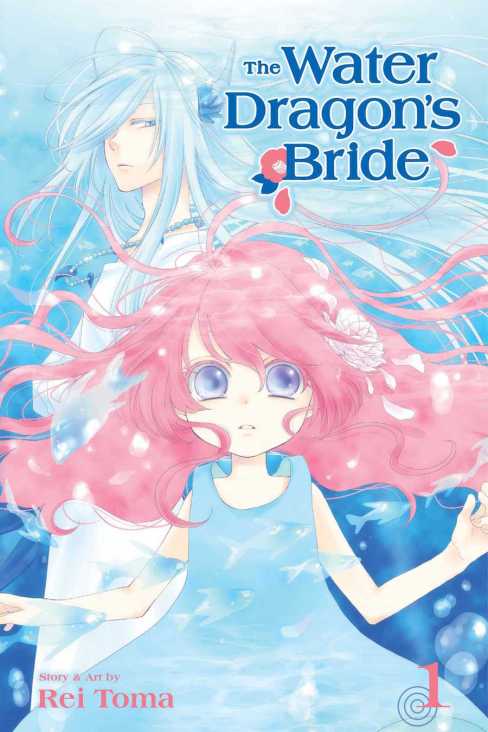 A couple months ago I posted on Twitter asking for opinions on what manga I should buy if I could only buy one volume, and this manga, Water Dragon’s Bride, was one of the suggestions I got. I’ve been trying to branch out from some of the longer running series I’ve been reading, trying out new stories and manga that look interesting, so I figured why not give this one a shot. I honestly wasn’t sure what my opinion of the story might be going in, but I was a little worried that I probably wouldn’t like this one or that it would have some problematic age-related romance in it that I usually steer clear of. And in some ways this manga surprised me, but in others it also confused me. I can see the appeal of the story and what the mangaka might have been going for in this first volume, but in all honesty, I’m not sure this manga is for me.

The Water Dragon’s Bride is a shoujo manga created by mangaka Rei Toma who has also created Dawn of Arcana. It’s a story about a young girl who is completely spoiled by her parents that gets transported to another world through a small pond in her backyard. The girl, Asahi, has no idea where she is and everything and everyone in this world is so strange and old-fashioned, totally different from the bustle of modern Tokyo she just left. She soon meets a young boy named Subaru who offers to shelter her while they look for a way to get her back to her parents. But Asahi’s strange clothes and way of speaking scare the other members of his village, and they begin to think that maybe she would be a suitable sacrifice to the god that lives in the lake.

I wasn’t sure what to expect going into this manga. Was it a romance? An isekai adventure with a young protagonist? It seemed likely that there would be romance involved given the title and the cover, but I was still hesitant considering the young age of Asahi. From the get-go I had problems coming to like the main protagonist and the overall narration or writing of the story. Asahi is a young girl, she looks no more than 10 or so, so it’s kind of expected that she be naive and annoying at times. However, I just felt that her personality and way of speaking rubbed me the wrong way at the start of the manga, making it hard to get into her story and come to care for her. Her first reaction to Subaru’s village is her shouting, “This place is the sticks!” like she’s trying to do some sort of comedy routine. In a conversation with Subaru later, she also says to him: “Hey you’re kind of a hunk. Not as much as my dad though.” Now I have admittedly not spent enough time around small children, so maybe it’s normal for children her age to talk like that. But to me, it just made her personality really grating, and this way of speaking continues for at least half the manga and only stops when she loses her voice. 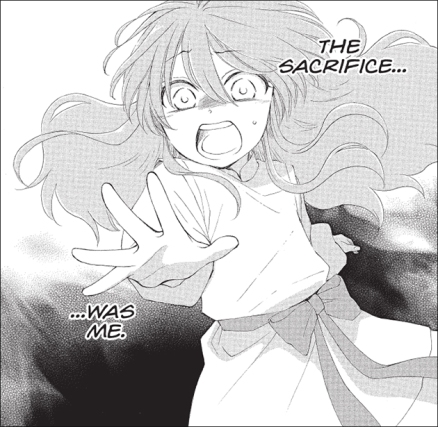 One of the other big problems I had was the way the narration and exposition was written. In essence, it felt too much like everything and every single meaning was being explained to us. “Show don’t tell” is an essential and often repeated skill in writing and crafting a story, and for good reason. Info dumps are almost never a good thing, and having a character’s emotions or reactions explained through narration or internal thoughts just drag down the feeling of a scene as whole, lessening the impact. It becomes this delicate balance of on the one hand trusting the reader to fill in the blanks of the story from context clues, dialogue, and character reactions and on the other hand, needing to explain some things so that world-building and the finer points of the story are made clear. In The Water Dragon’s Bride I almost felt like everything was being explained to me through Asahi’s future self’s narration. Every thought and opinion of the Water Dragon God for example was there for us to read even though it was clear that the meaning would stay the same if those text boxes disappeared. It felt like Toma doesn’t trust her readers to extrapolate meanings and thoughts from her art and past events. I can easily see that Asahi is terrified of the god as she runs away from him at her first opportunity, so I’m not sure why she added: “I was so afraid, I was completely terrified of him. That god….” over panels where we see Asahi’s terrified face looking back as she runs from the god’s world and his cold eyes in the last panel. 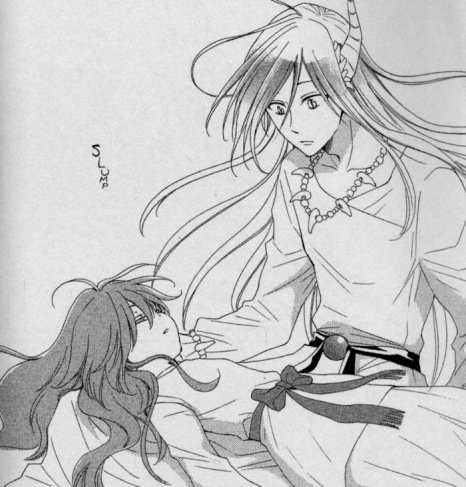 I think my biggest confusion by the end of this first volume was that I still wasn’t quite sure what this story was trying to be. Moments of it reminded me of Made in Abyss with the intertwining of horror and childhood innocence. There’s also this relationship between Subaru and Asahi that could go somewhere, but also this relationship between the Water Dragon God and her as well. In the last couple pages we see this moment where he looks to be surprised by the feeling of holding Asahi, so is this going to be one of those stories where human girl helps a cold-hearted inhuman understand humanity and love? Honestly, I hope not. I feel like that would just make the story worse with all the set-up already done at the beginning painting him as a horrible person that pushes Asahi to fear for her life.

The one thing I did like about the manga was Toma’s art. It has a lot of depth and feeling to it especially in the expressions of her characters. She’s able to switch back and forth between a standard shoujo feel and a more detailed horror feel fairly easily that creates these small shocking moments where her art really stands out. Unfortunately, this is just not enough to keep me invested in the series, and I don’t think I’ll be picking up another volume anytime soon. Feel free to let me know in the comments below what you think of the series and this first volume in particular. Is it representative of the story, or does it get a lot better later on?

If you like what I do here, consider supporting me on Ko-fi to get more manga posts like this!