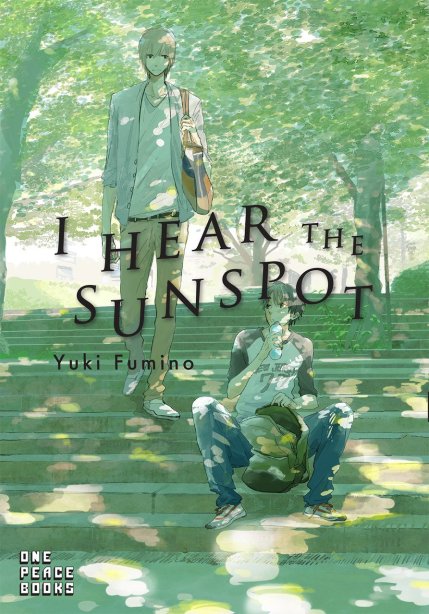 I feel like good disability fiction is on the rise lately with the likes of A Silent Voice becoming so popular and now I Hear the Sunspot is being talked about as both a great story about someone with a disability but also a great boys love manga. I’ve seen it mentioned so many times around the web and pop up on a lot of people’s must read mangas of 2018, and I have to say this manga definitely deserves all the praise that has been heaped upon it. Yuki Fumino really delves deep into what it means be a person with a hearing disability that not bad enough to be considered part of the deaf community but also not insignificant enough to be considered a “normal” person. The boys love aspects appear as more of an afterthought as the characters traverse societal rules around conformity and the almost infantilization of people with disabilities.

The publisher, One Peace Books, describes I Hear the Sunspot’s story as: “Because of a hearing disability, Kohei is often misunderstood by others and has trouble integrating into life on campus so he learns to keep his distance. That is until he meets the outspoken and cheerful Taichi. He tells Kohei that his hearing loss is not his fault. Taichi’s words cut through Kohei’s usual defense mechanisms like a knife and opens his heart. More than friends, less than lovers, their relationship changes Kohei forever.

I want to preface this review by saying that his is book one of the original two part series, but the volume itself does not mention what book it is. I had a lot of trouble figuring out what book to buy first since there is this one, book two, and then volume one of the multi-part series as well. So if you are looking to buy the series, start with the book with the green cover, then book two, then volume one of the series. I’ll be reviewing each one in order, so feel free to follow along with me as well. 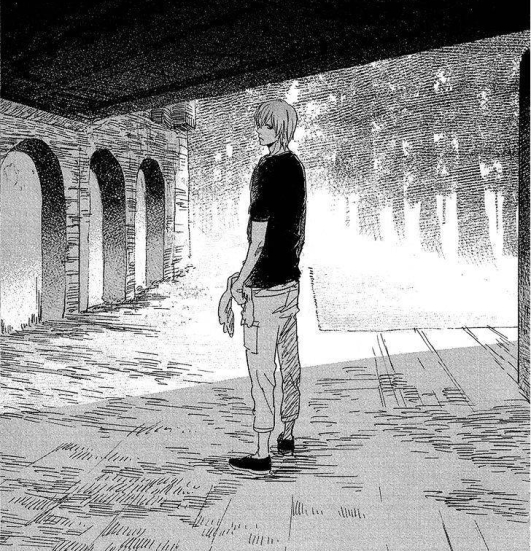 Besides that confusing bit about the volumes, I find a lot of strength in almost all areas of this series. The art could be a little stronger, but I honestly don’t mind it. The sketchiness of the lines and character designs lends to this over-exposed, light atmosphere within the pages that creates this feeling of two friends hanging out during a warm summer. Sometimes art with lines that art too polished and smooth can get a bit boring after awhile. I feel like I get more of an understanding of an artist’s style and emotions behind a comic when the art feels a little more raw. There’s not much in the way of shading or really dark, contrasting values, but Fumino does use dark screentones and black backgrounded panels during tense or darker moments to really bring them out and separate them from the rest of the story. 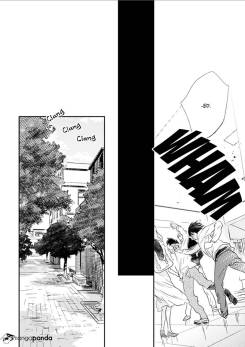 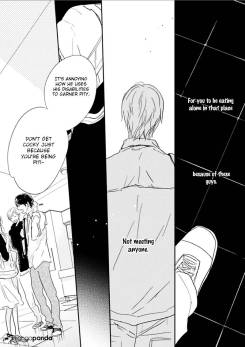 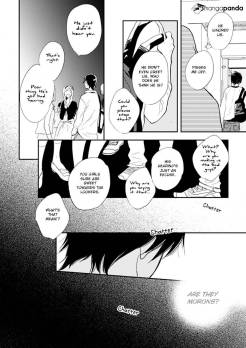 Fumino’s panel design is also really interesting. She uses a lot of small panels that cut into larger ones to inject energy onto a page or panels floating on black backgrounds for introspective or darker moments. Chapter One has some great scenes in the cafeteria where we get a combination of horizontal panels cutting into a dark background then a page of four long vertical panels that really adds to the emotional feel of the moment which leads into a great page-turn. Shots of Kohei’s shoulder as he’s holding his school bag walking away or his white shoe stepping on the black tile floor show how the words of the other students are effecting Kohei’s own thoughts and mood. I especially love the horizontal panel of the white legs on a black background that sort of creates this mob, in-group mentality. The shot of just their white feet creates this feeling that they’re this group of faceless students who think they’re better and superior than Kohei because they are part of the same group. 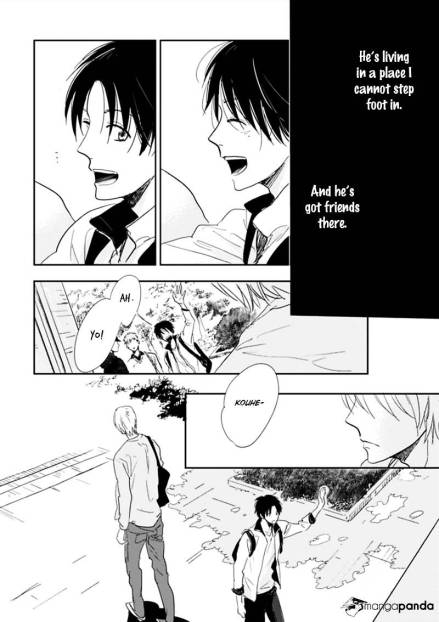 This kind of separation of Kohei from the rest of the students at the college is spread throughout the volume. Kohei becomes this person trapped in this limbo stage of disability. His hearing isn’t good enough to be considered “normal” and his hearing isn’t completely bad enough to be considered part of the deaf community. He is continuously in this weird middle ground where he doesn’t get the help he needs because his disability isn’t “bad enough” but he also gets treated differently by his peers because he’s not “good enough.” It becomes this really interesting yet sad look at the state of assistance to people with disabilities when people forget that disability is more of a spectrum than all-or-nothing. 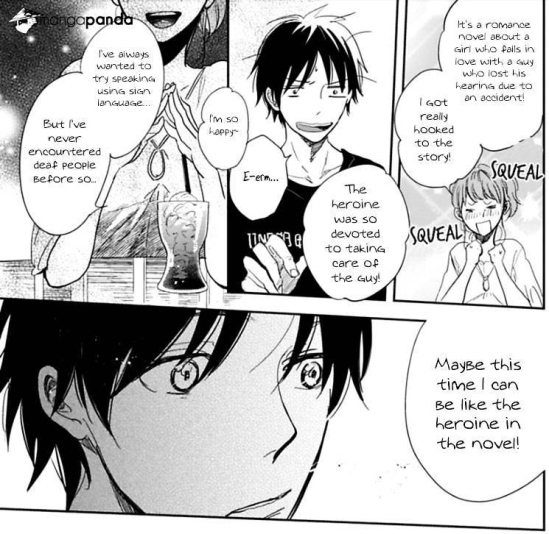 However, we see that there is also this group of people who feel that they want to help those with disabilities, but wind up doing it in the wrong way. These are the people that make a person’s disability their primary identity and begin almost infantilizing them by telling everyone they should feel sorry for this person. We see it in the flash-back scene to Kohei’s middle school days when he first started to lose his hearing. Here Kohei still wants to feel like a regular student but his teacher singles him out because of his disability telling the whole class to make sure they help him whenever possible. We see it in the character of Miho who becomes more interested in Kohei after finding out he’s hearing impaired because it reminds her of the oh-so-romantic book about a deaf man and the woman who falls in love with him she just read. Looking down on people for their disability doesn’t do any good, but neither does putting them on a pedestal. 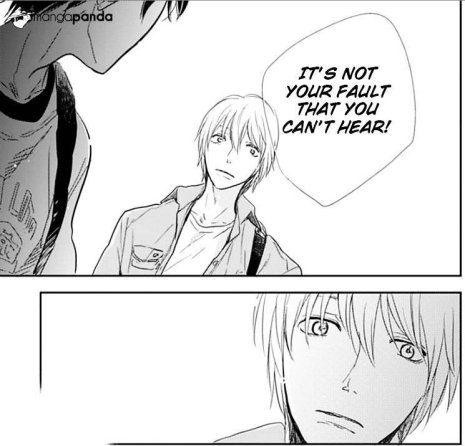 We see through the character of Taichi a more nuanced look at disability and how to treat someone with a disability. He does care that Kohei has trouble hearing and tries to help by being his note taker, but he treats him like a normal person. He calls him out for his self-deprecating attitude and lets him know when his actions are hurting his feelings unlike the other students who think he only wants sympathy. Taichi becomes an almost “manic-pixie” character who brings Kohei out of his shell and tries to bridge the gap between him and his classmates to show them all what he’s really like. 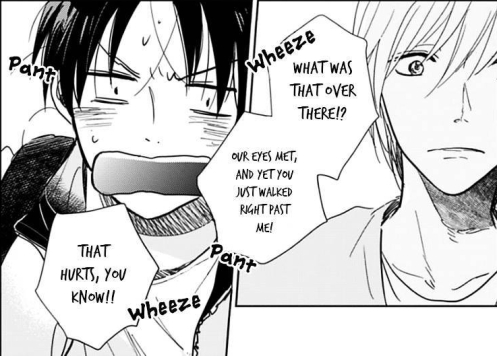 I really love both the character’s Fumino has built for this story. I think they wind up balancing each other out fairly well. Taichi keeps Kohei from sinking too far into himself and cutting himself off from the rest of the human race, and Kohei keeps Taichi from starving but also winds up giving him some kind of purpose later on. Taichi understands him even if no one else wants to make that effort or sees him as helpless or antisocial because of his disability.

So if you’ve been looking for some good disability fiction with some boys love thrown in, I think you should really check out I Hear the Sunspot. I’ll be reviewing book two as well at some point in the near future so keep an eye out. If you’ve already read this one, let me know in the comments below what you thought!