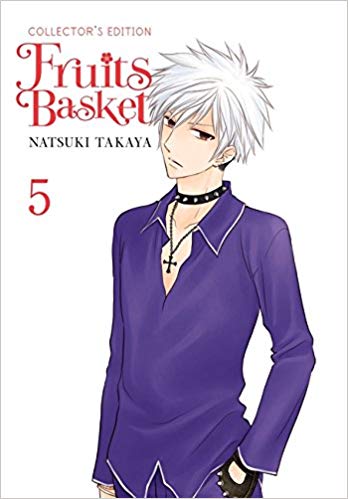 And we’re back with another look at Fruits Basket, this time volume five of the collector’s edition. I’ve been surprisingly having a lot of fun rereading this series and even more fun reviewing it. I’ve been loving taking these deep dives into each volume and pulling apart the different arcs of character growth and philosophical or thematic elements. I think it’s a really interesting series that not only is great to read but has made me think more about how I personally think about certain aspects of my own life and my own thoughts. And I think that is one of the main ways to identify if a series is truly great: if it makes you reflect on your own world and life views. Series like these are the ones that stick with us the longest because it builds an emotional attachment or adds an emotional connection. I don’t think I had this kind of connection back in high school when I first started reading this, so reading Fruits Basket now when I’m in a different stage of my life has created this new experience for me. But that’s a discussion for another day.

Volume five starts us off in the story with the onset of summer vacation. Yuki, the newly appointed president of the student council, sets off to meet his new council members and take care of business before the new school year begins. Meanwhile Momiji has made plans for all of the current Sohma zodiacs to have some fun in the sun at of the Sohma family vacation homes. Tohru, Kyo, Yuki, Haru, Kisa, Hiro, and Momiji all venture off to the beach while Shigure hangs back and plots from the shadows. His plotting leads to the surprise appearance of Akito at the summer home. In the middle of all of this we also get stories of Hana’s history with Tohru and her psychic waves, Uo’s meeting with the mysterious Kureno, and Hori’s history and relationship with his ex-fiancee’s friend Mayu. Lastly, we get two short glimpses of the last of the zodiac members, the rooster and the horse, Kureno and Rin. 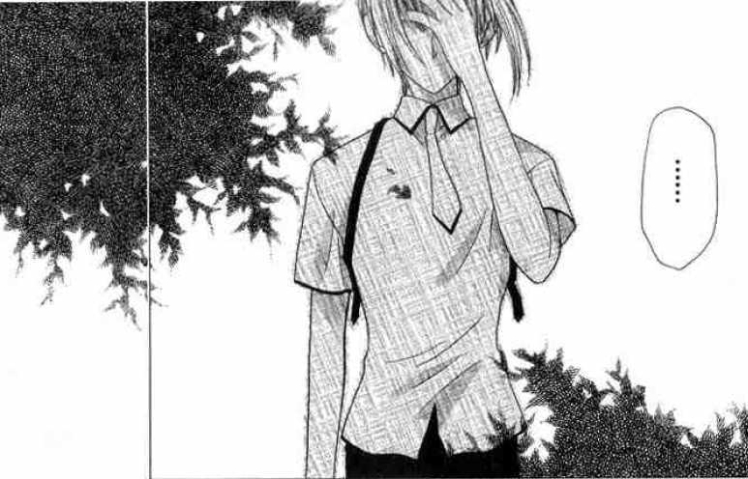 The story begins with a look into the mind and like of Yuki, the new student council president, who still has to venture into school during summer vacation to take care of paperwork and meet his new staff. His morning routine involves a short fight with Kyo before he heads off to school, and in this fight we see one of his weak points, a button that Kyo inadvertently pushes during their argument: the fact that Yuki believes he is a boring and uninteresting person. I feel like we’ve seen this crop in previous chapters of the series, especially in flashbacks to the abuse Yuki faced while still living in the Sohma compound, having the fact that he was a boring nobody who could only be loved by Akito drilled into his head over and over again while being isolated from everyone else. This kind of psychological abuse has stuck with him, becoming a button both Akito and Kyo (unwittingly) push to hurt him emotionally. 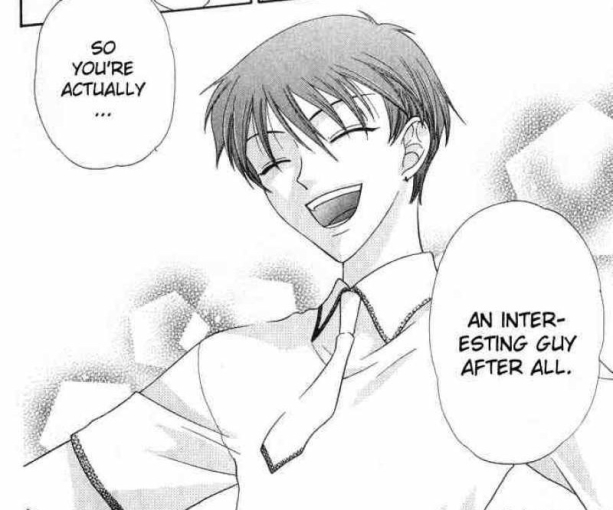 However, what we see with this story arc and the series in general is just how much the actions and acceptance of one person can change someone so quickly or affect them so powerfully. Tohru’s unwavering acceptance of Yuki for all his cursed and moody self creates this great bedrock on which he can begin to stand on his own two feet again. What we see with this story of Yuki meeting his new student council officers is someone who tells him he is in fact an interesting person. His vice president, Kakeru, and treasurer, Machi, are both fairly weird people but its Kakeru’s forwardness that makes a crack in Yuki’s self-loathing. For once he’s accepted by someone other than Tohru for who he is, and I can see the future environment of the new student council being fairly interesting and challenging in a positive way for Yuki.

The next big story we have is chapter 50 where Uotani meets a mysterious man at the convenience store where she works. He’s so clumsy and naive Uo can’t help but think he reminds her of Tohru, and she can’t stop thinking about him after he leaves either. When she finally runs into him again in the street, we find out that he is Kureno, but don’t yet know that he is part of the Sohma zodiac. I find their budding relationship really sweet actually and the set-up of this chapter pacing and plot wise is fantastic. We get teasers throughout that something is off about Kureno like his comments about not ever being to a convenience store before and being married to his work. But it is only at the end where we see him walking into the shadowed Sohma main house that its revealed he is part of the zodiac, one of the closest to Akito. And I think this set-up makes this love-story incredibly sad but also hopeful in a way. Kureno is caged in by Akito, pretty much forbidden to ever leave, but Uotani becomes this beacon of hope for the future for him, a sense of normalcy and a potential life outside. I really love how we’re led slowly through this chapter with it ending in Kureno getting pulled into the shadow of Akito at the end.

This volume also gives us a look into Hana’s past in chapter 51, a look back at her childhood and the development of her “psychic waves.” I honestly wasn’t entirely sure what to make of Hana’s psychic powers throughout the series, and I’m still not entirely sure what to make of them now. He story comes off as a kind of weird subset of supernatural happenings within the larger supernatural zodiac curse story. Her character’s ability to pick up on the psychic waves of people seemed almost as a comedic device or way of adding some ironic tension to scenes in which Kyo and Yuki had to interact with her. Her backstory is fairly moving, but it doesn’t really negate the feeling that her purpose in the series is for this weirdness factor and comedic tension.

What we see in her backstory chapter is a story similar to Kisa’s in that it involves a copious amount of bullying, but I think Hana’s experience with bullying takes it to a new level. Singled out at her old school for the fact that she had these psychic powers, the students begin bullying Hana severely to the point where her psychic waves get out of control and nearly put a kid into a coma. Scared that her powers may eventually kill someone, Hana withdraws from the rest of the school and begins to wear black as a sort of atonement. But this only escalates the bullying and she is eventually forced to switch schools wherein she meets Tohru and Uotani who are the first people to accept her as she is (besides her own family), psychic waves and all. I think it’s interesting to see here that the only people to reject Hana for her powers are the people in the school. Her family completely accepts who she is and tries hard to help her control her powers. Far too often we get stories of kids who are both rejected by their parents and their peers for their weird abilities (looking at you Kotoura-san), so it’s nice to see Hana having some stable support group she can fall back on. And with the acceptance of Tohru and Uotani we get to see her grow into a more confident and loving person as well who now just wears black because that’s what she’s comfortable in.

What comes after these chapters is a collection of mysteries and plotting both by Akito and other members of the Sohma family and by Shigure for his own unknown ends. Chapter 52 gives us a look at the possible future for Kyo as he goes off to visit his martial arts master and father figure Kazuma with Tohru. Kazuma gets called away to speak to Kyo’s biological father and it’s there we learn that Kyo’s fate is set after high school, to be locked up for the rest of his life away from everyone else, as was the fate for all the previous cats. Kyo, and the curse of the cat zodiac, is the culmination of guilt and shame of the zodiac curse and the wider Sohma family, so their solution has been to lock it and that person away to never be heard from again. Out of sight, out of mind, letting the curse continue with no effort at understanding or forgiveness.

We also get to see more of Shigure’s scheming during this volume, with his forcing Hori to meet the friend of his past lover as a seemingly intentional way to set them both up to be together. We also see more of Shigure and Akito’s relationship, one that is looking to be more in the realm of lovers than anything else. And then we have the appearance of Rin who we know just dumped Haru and is now shown coming to Shigure for advice for something. Shigure himself is an interesting figure. He harbors the spirit of the dog, a symbol of loyalty, and i think we get to see a bit of this come through in his efforts to move events of the series along to his liking. His invitation to Akito to come to the summer home while everyone else is there could be seen as cruel, but I think in Shigure’s eyes it becomes a way to not only test the zodiac member’s strength of character but also Akito’s long-held beliefs in their own psychological hold and power over the cursed members. Shigure knows Tohru has done irreversible change to everyone there and now is the test to see if that change can whether Akito’s emotional stranglehold on them all.

During all of this we also get this interesting look into the head-space of Tohru as her mask of cheerfulness begins to crack around Yuki and Kyo. I feel like I keep forgetting that her mother’s death wasn’t all that long ago, and during the course of the series we get this small reminders that maybe Tohru isn’t dealing with it as well as we think she is. Yuki’s comments about having to open and deal with his box of emotions and memories at some point also sparks something in Tohru leading us to believe that she hasn’t yet fully dealt with the emotions surrounding her mother’s death. Her obsession with her mother’s photo, her continual cheerfulness, and the few moments of weakness she’s had all lead me to believe we’ll have a time down the line where all of these bottled up emotions are going to come to a head and either slowly or explosively come out. I’m really interested to see which one it is.

Thanks so much for keeping up with these reviews. I’m still hoping to get all 12 volumes read and reviewed here even as the new anime is playing. Now that we’re approaching the half-way point, I’m hoping it won’t take me too much longer until we reach the end. As always, be sure to leave a like if you’ve enjoyed this series and leave a comment if there was something super interesting you think I missed or just to say hi, either is fine by me!