We’ve finally reached the halfway point and what a journey it has been. I don’t know if I ever made it this far when I first started reading this series. I have to confess I did read ahead over my short two week break and have finished reading the series all the way through, and what a ride it has been. I am definitely so glad I picked up this series after all this time away from it, and now that the anime has been airing, I can’t unhear the English voice-actors while I’m reading through the dialogue, which isn’t necessarily a bad thing. And even though I’ve already finished reading through the series at this point, I think it would be beneficial to keep doing these reviews volume-by-volume just because of the vast amount of things to talk about in this series and all of the interesting character progressions and growth we get in each chapter (I’ll also try to keep spoilers for future volumes to a minimum). Volume six winds up being both the halfway point in terms of physical volumes as well as the kind-of metaphorical halfway point in terms of overarching story progression. I think we see a genuine crest or apex in the story during this volume in regards to the story and in regards to two of the main characters: Tohru and Kyo.

Volume six picks up where we left off in the last one with the Sohma’s and Tohru still at the family vacation home where Akito has decided to grace them with his presence. While the main members of the zodiac are called to spend time with Akito each day, Kyo and Tohru get the chance to spend some quality time together. But when Akito finally calls Kyo in to see him, their argument leads to changes in both Kyo and Akito for better or worse. As their summer vacation draws to an end, we learn more about Kyo’s past, finally get fully introduced to the last two members of the zodiac, and see Tohru confront Akito. After this confrontation, Tohru makes up her mind to find a way to break the curse before graduation. And as it fast approaches, everyone begins seriously considering their own futures, which for the zodiac members, becomes a challenge.

I think some of the best character growth this volume comes from two of our main characters. We see this first with Kyo when he and Tohru are out making sandcastles and she inquires about his prayer beads. He confesses that the beads are made of human bones and blood, passed down for generations, a form of sacrifice made by some monks long ago. In this moment, the connotation of those beads change, becoming more entangled in Kyo’s past of grief and guilt. It becomes another added layer to his survivor’s guilt as he is only able to stay human and live a normal life through the sacrifice of another person. In those moments, we get a short flashback to the time he went “training” in the mountains with Kazuma-sensei, showing just how deeply trapped in guilt he was back then, and still is to some extent. Survivor’s guilt is a powerful feeling, and I think the main thread of Kyo’s growth through this story is how he deals with this guilt and comes to accept that he has just as much right to live as anyone else.

However, I think there was a small turning point for Kyo in this volume. Kyo gets called into a meeting with Akito, and as Akito does, he hurls emotional and physical abuse at him, trying to break his spirit. He brings up the death of his mother time and time again, pushing at his feelings of guilt and shame, with the final punch being the phrase “you should have died instead.” But Akito makes a grave mistake here: he brings up Tohru and calls her a monster for even accepting Kyo. I think if he had stayed away from bringing Tohru into his abuse, he could have kept Kyo’s mood down at the defeated level. But the moment he started insulting her, Kyo felt the need to defend her, giving him the strength to stand up to Akito and leading to a major revelation for him. Akito makes him realize just how much he loves Tohru because she accept him despite his true form and despite her fear of it. Her always being there for him has done more to sooth his guilt than anything, and through defending her to Akito, Kyo winds up cementing these feelings in his heart. Unwittingly, Akito has made a terrible mistake. But Kyo still has a long way to go in terms of overcoming all of his guilt, and for a short moment we see one reason why, a young Kyo sitting with Tohru’s mother and a flash of her dying in the street. 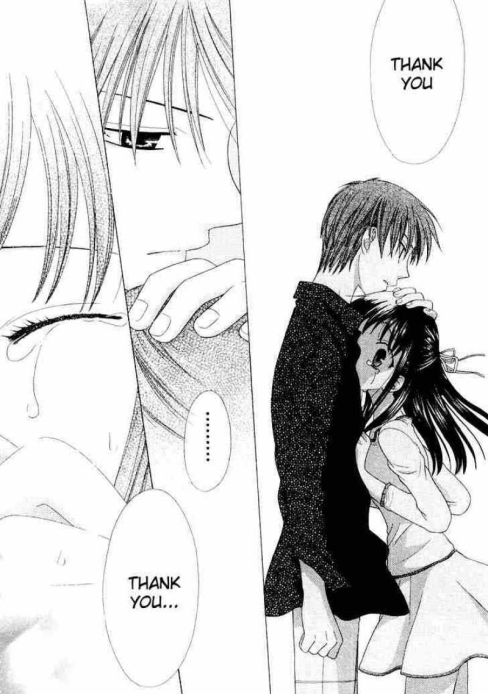 Chapter 68 gives us another bit of resolution and character development as Kyo and Kagura are finally pushed to come clean with each other about their real feelings. This chapter winds up being a huge leap from the beginning of the series where they would both fight all the time with each other over Kagura’s clinginess. In this chapter, we see both characters finally maturely talking about their feelings. No fights, no screaming at each other, just heartfelt words. And I think some of the biggest change comes from Kyo who makes the time for her and very calmly hears her out and explains his own feelings.In this whole exchange we see more feelings of guilt and shame being revealed, guilt over running away from his true form and shame over thinking her feelings originated from pity for him. It was a really interesting chapter and I loved seeing the mature Kyo come through here. 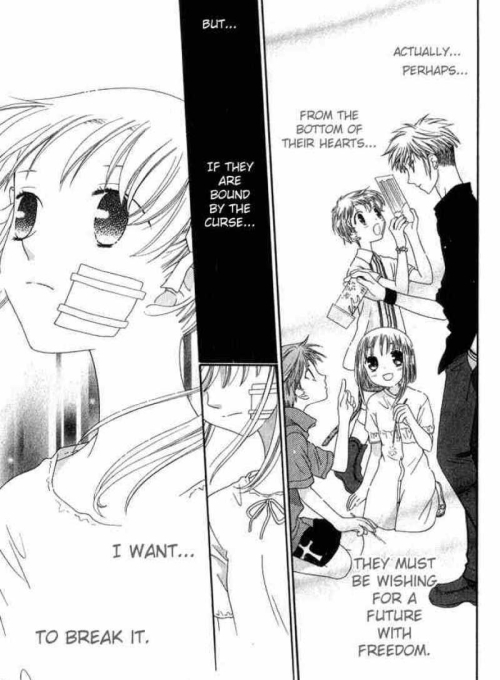 Tohru goes through a fairly major change in this volume as well. I think this is honestly the tipping point for her character in how she sees the curse and how active a role she takes in trying to help the Sohma’s break it. You could say that one major tipping point was seeing Kyo’s true form, and I would agree with you there. I think that was really the time where the story went from light-hearted quirky fantasy to a deeper, more serious story. Here, we see the shift from passive support to active involvement that will begin to push the story to its ultimate conclusion. Again I think it’s ironic that Akito is the catalyst for all of this. He pushes Tohru to action when he comes to confront her on his last night at the vacation home. His reveal to her that Kyo will be locked up for the rest of his life and everyone will be brought to live forever at the main house pushes her to make the decision that she will find a way to break the curse before graduation.

I also think this is very telling for Tohru’s character in a way too. It’s very much like her to want to do everything in her power to help the Sohma’s. We’ve seen throughout the series just how giving Tohru is and just how willing she is to put other’s feelings above her own. It’s a no-brainer to her that her only choice here is to put her all into breaking the curse to try and protect the futures of her friends. But I also think she takes too much onto herself, so the addition of this on top of her grief she still hasn’t gotten through from her mom, will eventually begin to pile up to the point where she might not be able to handle it all calmly. But then good stories are made when authors challenge their characters and put them to the edge of what they can handle.

I think most of this volume can be boiled down to an overarching theme of trying to protect the people you care about. We see it pop up in every single chapter. The Sohma’s working together to protect Tohru from Akito. Tohru protecting Momiji from Akito and then declaring she would protect them all by breaking the curse. Akito trying to protect his way of life by confronting the people he thinks are a danger to it. Kyo trying to protect the time he has with Tohru. Rin trying to protect Haru by searching for a way to break the curse and subsequently needing to be protected from herself. I really do think it’s interesting to see how a lot of these chapters can fall under similar themes and how each character reacts differently to their interpretation of what it means to protect something. We’ll be seeing a lot more of this theme in the future as well.

Thanks for sticking with me through my two-week absence. I’m hoping to get more of these up in the coming weeks and hopefully, finally finish this read-through on the blog. However, I also have a few other manga I’ve been dying to talk about so you may see a smattering of those coming as well. Let me know in the comments what your favorite part of the volume was or if there’s anything else you think I could’ve touched on.