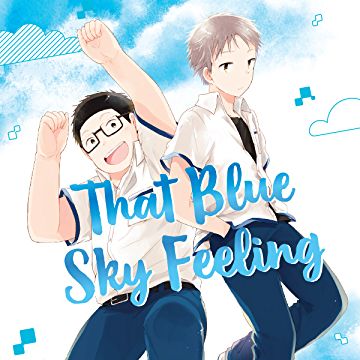 What does it mean to like someone? How does someone know when a person becomes special to them? What does it mean to be in a relationship? These are all questions fundamental to the romance genre no matter the age, though usually found in those stories centering around a younger age group. How a person understands and interacts with the people closest to them is an important part of growing up and maturing as a human being. High school romance stories often focus on this key period of development as the main characters come to understand and discover both themselves and their relationships with those around them. That Blue Sky Feeling combines the self-discovery of youth with the queer story-lines of realizing and coming to terms with being gay. Volume one of this three-volume series is not only a great introduction into these concepts but also can act as a great first step into the boys love genre for anyone interested.

That Blue Sky Feeling focuses on the life of transfer student Noshiro Dai who meets the loner Sanada after coming to his new school. He doesn’t seem to have friends or really want any. And then there’s the rumor permeating the school that Sanada is gay that makes the other boys keep their distance from him. But that doesn’t seem to deter Noshiro who decides to embark on a campaign to win Sanada over and become his friend. The manga was adapted from an original webcomic by Okura with artist Coma Hashii collaborating for the adaptation. It’s currently licensed for English release by Viz Media. 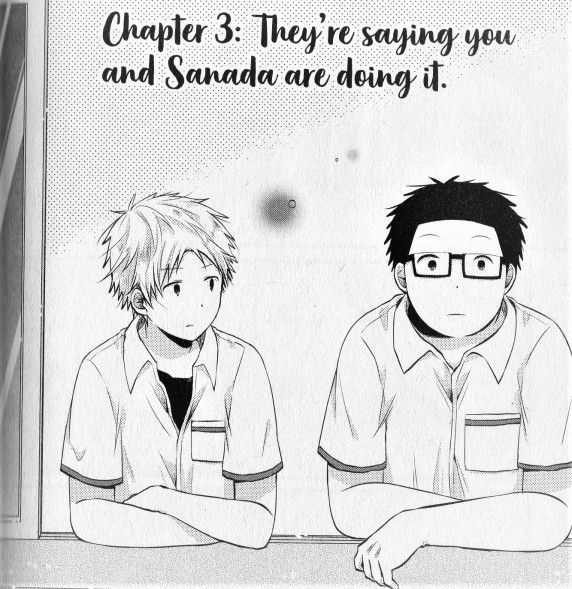 I think one of the selling points of this series for me was the character designs. I think far too often the gay romance genre features characters that are conventionally attractive, especially when it comes to boys love and yaoi. Perhaps it’s because this series is both shonen and written by a man that we a main character like Noshiro who is not what I would call conventionally attractive. In the series he’s referred to as kind of a potato. He’s a short, stocky boy who has a heavier build than many of the characters in the series. He’s shown to have practiced Judo at his old school, so his stocky build makes sense, but in this kind of story it becomes fairly refreshing to see a manga break away from the kind of body types a lot of romances tend to use. In this way Noshiro’s appeal doesn’t come from his appearance but from his personality. And while Sanada is a “pretty-boy” type, I don’t think his appeal for Noshiro has anything to do with appearance either.

Coma Hashii’s art is pretty solid throughout the manga as well, though I will say it’s not the most eye-catching or stylistic. It certainly works for the story here, but I wouldn’t say that I would be buying this manga because of the art like with some other series. So if art is important to you, I would say you probably won’t have any problems with this series but it also won’t be one of your stand-outs. For one the value range is fairly minimal. Most of the panels seem to have a fairly flat gray tone and use a lot of white. Backgrounds are also minimal with mainly flat school scenes, whites, or effects in most panels. The use of whitespace in panels can be a useful tool for comic storytelling, but it should also be paired with backgrounds that offer a little bit more detail to the world to make the story feel grounded. It doesn’t cause too many problems here as this is mainly a character-driven drama/romance, but it also doesn’t add anything either, which is a shame.

The story of That Blue Sky Feeling is I think the biggest plus of the series. The art may not be fantastic, but the story has great upsides that I think will appeal to many people. Noshiro is a naive character searching for what it means to have a relationship with someone, acting as almost a male version of a “manic pixie dream girl” to Sanada. He barrels his way into Sanada’s life and doesn’t let him reject his friendship and winds up accepting Sanada for who he is. Noshiro’s unconditional acceptance allows Sanada to finally open up about who he is and begin accepting people back into his life and helps him realize his own feelings for those around him.

Their friendship is definitely a process though and I think that was one of the aspects of the story that I really enjoyed. Noshiro has absolutely no knowledge or experience with people who are gay, seeing them and their experiences as an almost separate world than where he is. When he hears the rumor that Sanada is gay, he still supports him to the rest of the class, but when Sanada comes out to him for real, he has trouble believing it’s anything other than a joke. Noshiro’s process of coming to terms with Sanada being gay and deciding to continue being a friend to him is a crucial part of the first volume’s story. I think I really like this part of Noshiro who takes the time to really ruminate on his actions and relationships because I’m so used to shoujo romances where much of the relationship growth involves less than straight-forward plot threads. Noshiro, on the other hand, very clearly contemplates his actions and is very straightforward in how he communicates with Sanada. There’s no beating around the bush, there’s just “I was wrong, I’m sorry for how I acted” and that’s very refreshing in a way.

Sanada has his issues he has to work through as well though. His story involves a lot of introspection too into how he relates to people and the kind of person he wants to be seen as. He’s a gay teenager in Japan, a country that’s not that accepting of homosexuality just yet, especially in a school system that places conformity at the top of its ideals. Creating a persona for himself and distancing himself from the other people in his class becomes a defense mechanism. While he says that he doesn’t care who finds out that he’s gay, he still holds onto this persona and winds up pushing people away from him. Noshiro becomes the first person to accept him for who he is and sees behind his mask, eventually encouraging him to open up a little more at a time.

The one issue I think some people might have with the story is the introduction of Sanada’s ex-boyfriend, a 26-year-old man. In the context of the series, he acts as a sort-of mentor figure for both Sanada and Noshiro, offering advice and the perspective of an adult gay man. I’ve seen some people who have read the series saying that this reminds them of the stereotype that all gay men are pedophiles. While I don’t think that was Okura’s intention here, I can see how a relationship between a 26-year-old man and a highschool student can be uncomfortable. I think Okura added him in as a way to give the characters a mentor figure, someone experienced in both romance and being gay who could give insight into both of the main character’s feelings as well as Sanada’s distinct personality quirks. I don’t know if he necessarily needed to be Sanada’s ex in the context of the story, and I wonder if there could have been a better way to incorporate his kind of character in a different way.

All in all, I did enjoy this series and also wound up picking up volume two along the way, so you may see another review in the future. If you’ve also read this series, let me know in the comments what you thought or hit me up on my Twitter. Until next time, I hope you all had a great Pride Month!

4 thoughts on “That Blue Sky Feeling Manga Volume One Review”