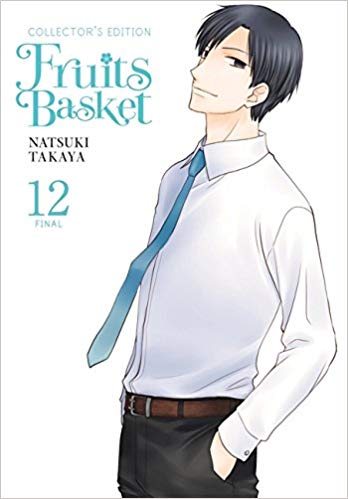 “Love isn’t just about loving what’s in front of you. The past, the future, maybe it’s about holding all of them close to your heart.” I think this quote by Kyo in this volume is really emblematic of the kind of ending we see for the series. Fruits Basket has been a series about hardship, emotional and physical abuse, parental abandonment, and family secrets. But most of all its been about growth. Growth in character, relationships, and maturity. Facing the hardships and difficult emotions that come with them are a key aspect of the series and almost all the characters learn some way to grow and move past them. Volume twelve is the final look at how our characters we’ve grown so attached to over the series have matured and faced the issues of their pasts. We see this most clearly with Kyo, Akito, and Rin as they all struggle to find a new place for themselves after the curse is broken, dealing with the memories and fall-out of Akito’s past actions.

Volume twelve brings us back to the Sohma household where all the members of the zodiac have been called in to meet with Akito. It’s here that she reveals the fact that she has been a woman the entire time and attempts to apologize for her actions.  We also get to see the final wrap-up of each character’s stories as they finish off high school and move on to bigger and better things. Kyo and Tohru head off to places far away as Kyo studies to take over Sensei’s doujo. Uo still plans on joining Kureno wherever he is after graduation. Then there’s Yuki and Machi who are planning a slightly long-distance relationship as Yuki heads off to college. Shigure quits being a writer and moves back to the main house to be with Akito, and lives move on and grow from there. 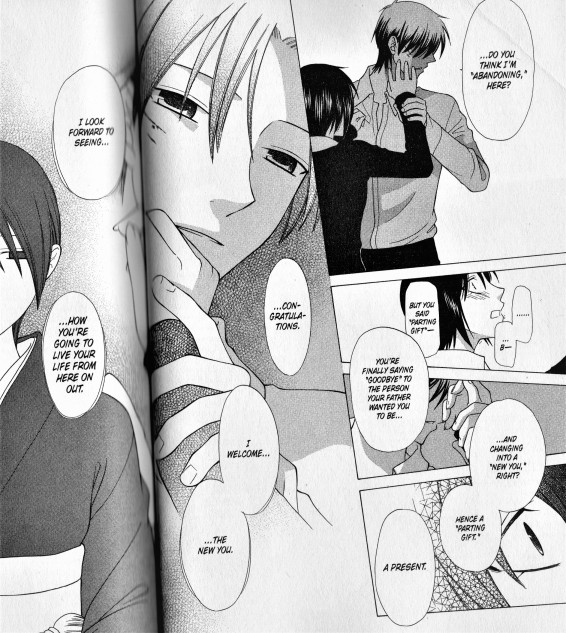 I generally like happy endings, I mean who doesn’t? It’s that feel-good reward for making it to the end of the story. We’ve come so far with these characters, gotten invested in them emotionally, so of course we’d want to see them succeed. Fruits Basket put its characters through hell and back, exposing them to their darkest, innermost fears and emotions, and then brought them back out the other side changed permanently. It’s the building blocks of a great story honestly. After seeing so much emotional turmoil and struggle from these characters, it becomes rewarding to see them finally achieve their dreams and get to a place where they can find peace.

Akito’s story is one that I think saw the most dramatic change, both physically and emotionally. She goes from a woman heavily scarred by her mother’s rejection and her father’s death, warped by the bond she shares with the rest of the zodiac, and lashes out to protect her idea of an ideal future. She both physically and mentall abuses the members of the zodiac, at one point locking Rin in an isolated room until she almost starves to death. Once the curse begins to break, however, her ideal dream for the future begins to fall apart and she loses some of her ability to manipulate those closest to her. It’s through Tohru’s kindness and brief brush with death that she’s able to realize how her actions have been affecting those around her and find a modicum of acceptance for who she truly is.

None of this excuses her actions, and I think Rin’s history and reactions in this volume prove that Takaya is not trying to brush off what she has done. Rin, I think, was probably hit the hardest by Akito’s actions. Being pushed off a balcony and landing on a sharp piece of bamboo, being locked in an isolation room, being hospitalized multiple times for related health issues, being forced to break up with Haru, and being manipulated by both Ren and Shigure. It’s no wonder that after everything is over, after Akito tries to make amends, that she can’t find the will to forgive her. And that’s okay. After everything that’s happened to her, Rin has the right to stay angry for a while, or forever, if she wants. She has a legitimate reason, and the scars from Akito’s abuse won’t ever go away for her, sitting as constant reminders. However, putting these feelings out in the open like this and discussing how hard it really is to forgive someone is a great message to have to. Messages of “forgive and forget” I think downplay a lot of the pain and lasting suffering of abuse victims. With Fruits Basket saying “it’s okay to not forgive, you’ve been through a lot, and your feelings are valid” is something I really liked seeing here.

With Kyo we see him trying to move past everything, get away, and forget it all. But it’s through Tohru picking up his scattered prayer beads and saving them that he comes to realize that his time as the cat of the zodiac is just as important to him as who he is now in the present. His prayer beads are a reminder of everything he’s went through we see in this volume his final acceptance of his past and his excitement for the future. It’s such a great end to his character who started off as a grumpy, hot-headed guy who didn’t know how to express his emotions clearly to this happier and calmer man who knows what he wants out of the future and isn’t trying to run from his past anymore. 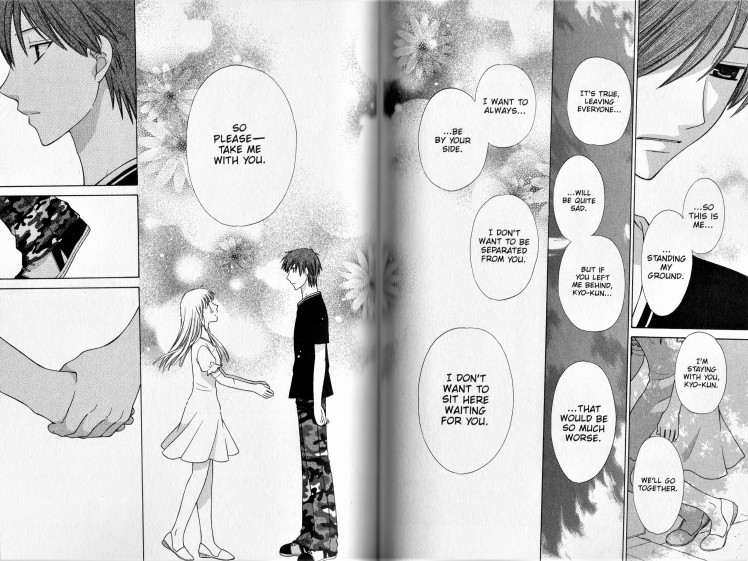 I also absolutely love the neat tying up of all the love stories in here too. I can’t tell you how happy I was that this series never turned into a harem manga. It’s so much more meaningful to see Yuki and Kyo go off in different directions romantically and so much less frustrating to know there’s really only one romantic partner vying for her attention (at least until Momiji grows up, but he eventually moves on too in the end). Kyo and Tohru’s romance was so sweet to watch. How they both grew stronger with each other, supported each other, and struggled to convey their feelings clearly for very legitimate reasons. I really love that we get the little afterword chapter with Kyo and Tohru in their old age taking walks together.

I also have to say at the start of the series I really wasn’t expecting Yuki to get a romantic plotline, though I could have guessed considering how popular in the series he is. In the end though, I absolutely love Machi and Yuki as a couple. I think they both work well together and Yuki’s attention towards the needs of other people works well with Machi’s neurotic tendencies. They both wind up taking strength from each other and building a really cute relationship with just the right amount of awkward.

As for some final thoughts on volume twelve: if you’re looking for some extras with this collector’s edition besides the full color versions of past covers in each volume, look no further than this volume where we get old advertisements for the series, a timeline, character profiles, and character designs. There’s also a really cute section in the back where the editor’s pulled some favorite quotes from the series and added in fan comments and opinions. It’s a nice addition to the final volume, and all together, the extras take up roughly half of the volume.

As for final thoughts on the series: Oh dear, this was a wild ride with so many feelings and dark themes interspersed with comedy. I can definitely understand why it’s a classic of the shoujo genre, and I’d definitely say it’s one of the defining classics of the genre at least for fans of the 90s and early 2000s content. I can’t believe it’s taken me this long to read all the way through, but it’s been an amazingly enjoyable experience. And I now have 12 very nice editions to sit on my shelf and be admired.

I hope you all enjoyed this read-through. There’s going to definitely be more Fruits Basket content in the future, so keep an eye out for that. Leave some comments down below on what you thought of this volume, the series, or this read-through. I always like to hear opinions!