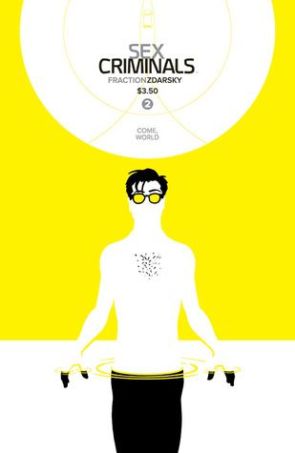 Issue two of Sex Criminals, aptly named “Come, World,” switches over to the backstory of Jon and how he came to discover his ability. Again we see the inclusion of a frame narrative, where the main plot of the robbery borders the flashbacks and developing story of Jon. The main point of this issue centers around the differences between how boys learn about sex versus how girls do as seen in the last issue. Along the way, we also get to see more characterization of both Jon and Suzie.

I don’t know how we’re meant to see Jon’s actions though or if we’re supposed to brush them off as the recklessness of youth. But with the bank robberies and other things that older Jon does, would you consider him an anti-hero? Someone who does all the wrong things for the right reasons? Though I don’t know if I would consider his personal reason for the robbery (i.e. getting back at his boss) a “right” reason. But I guess that’s what readers find appealing about these characters, the fact that they act in ways you would consider human rather than heroic.