Happy Marriage is created by Maki Enjoji and was compiled in 2009 into 10 volumes that were brought over to the US by Viz Media in 2013. It centers around a woman, Chiwa Takanashi, who is forced into an arranged marriage with a man she has never met in order to save her father from his debts. The man, Hokuto Mamiya, happens to be the president of the company she works at, so they must keep their marriage a secret from the rest of the world for the time being. The story mainly focuses on the challenges of living with someone you don’t know, and the problems that come with entering into his high-class family.

This manga is a pretty typical Shoujo romance with more of a skew to adult audiences as it features older characters and themes that are relevant to a more mature readers. Most of the characters come off as pretty typical for the genre, but for some reason I found myself coming back after each volume. Chiwa comes off as naive and constantly gets into a cycle of self-doubt all the way to the end, but in a lot of ways, she’s endearing in how much she cares about her family and how she honestly tries to make the best of her situation. She also has her own sense of power in a way that evident throughout the manga. The simple fact that she doesn’t let Hokuto push her off to the side to forget about her says a lot about her tenacity. Chiwa consistently forces her way into his life, making perfectly sure Hokuto knows that he is living with another person now and that comes with sacrifices. But her naivete shows through a lot more than I want it to sometimes. Her constant running off to get advice from her coworker Yagami was starting to get annoying as the story progressed and their relationship started to become serious. I’m not sure if this is a bad thing or just a product of her trying to make her relationship work, but I also noticed her strong-willed personality fading a little bit later in the series as she starts to try too hard to please Hokuto. This could also be caused by her insecurity, but it also started to force her into cycles of misunderstanding.

I think Hokuto is probably one of the best characters in this manga. He grows so much over the course of the ten volumes that it winds up being a huge payoff when we get to see him flustered or display his true feelings. This is probably what kept bringing me back to this story. For both Chiwa and Hokuto, the whole story revolves around their growing sense of family and the difference that there can be between the family you were born into and the family you make for yourself. We get to see Hokuto’s walls slowly start to break down as he builds that sense of family with Chiwa in the face of all the drama coming from his relatives. Slowly, Hokuto’s priorities are reversed. To him, work was everything and pride was not something he would ever sacrifice for another person, but as Chiwa forcefully breaks down all his walls, we see the slow flip-flop that comes with loving another person. Through this, we find out that behind all that pride and bluster is just insecurity and inexperience. Hokuto goes from a cold and closed-off tall-dark-and-handsome to someone more relatable almost faster than Chiwa matures. 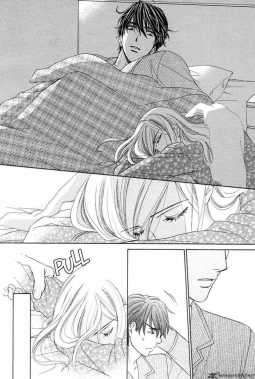 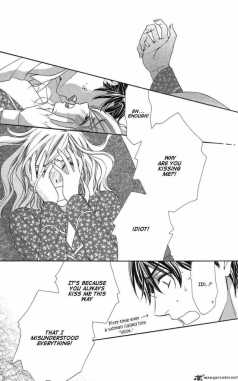 While I would classify this as a fluff romance, there is a thread of mystery and suspense thrown in to the whole thing as Hokuto tries to find the person who killed his mother. The drama surrounding his relatives and his mother’s death adds a nice backdrop of drama that helps round off the series and keep it moving from one chapter to the next. The suspense starts to build after a few volumes, but picks up pretty quickly over the course of the volumes. Running behind all of this is the backdrop of high class versus low class, providing a contrast to Chiwa’s brash character. The drama provides a nice bit of depth to the story, but it also acts as way to cement their relationship and bring them closer together by reinforcing where their sense of family lies. 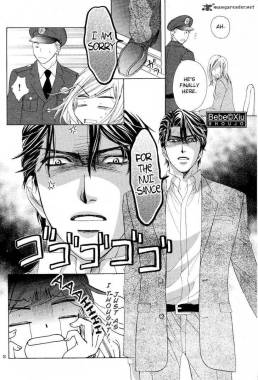 As for the art, I don’t think there was anything that really surprised me about it exactly. The style is pretty standard for the genre: large, expressive eyes for women and the more angular facial features for men with the narrow eyes. What I think Maki Enjoji does well is pacing and effects. There were a lot of scenes where I thought her panel layout works very well to bring out the overall tone of the scene and add impact where it was needed the most. I love how it was spaced out to add to the flow of the story instead of having panels crowding together that can make some mangas feel jumbled and hard to read. Her large panels allow for the reader to see the full expressions of the characters, both facial expressions and bodily posture that can sometimes be lost with smaller space. The use of screentones wasn’t heavily overdone, but used in such a way that it added a sense of pop to areas where there was heavy drama especially around the eyes.

Overall, I think this manga is a pretty solid choice if you’re looking for something other than a high school romance to read. While the main character of Chiwa did get on my nerves a little bit through the story, by the end I grew to like her character and how her and Hokuto meshed as a couple. This story shows the ups and downs of forming a marriage and how sometimes you need to fight out your problems to become stronger as a couple. If you want to see a more detailed break-down of volumes one through four, my reviews for those are still up (they do contain spoilers).