Exquisite Corpse follows the life of main character Zoe who works as a booth babe at conventions and hates it. Her life consists of going to work and then coming home to a boyfriend who is outright verbally abusive at times. While on her lunch break, she notices someone peaking out of his window at her and decides to stumble into his apartment to use his bathroom, not knowing that he is the world famous author Thomas Rocher. His apartment becomes an escape for her and they quickly form a relationship, but his unwillingness to leave his apartment is troubling. Thus starts Zoe’s investigation into Thomas’ terrible secret.

This graphic novel was created by a French artist named Penelope Bagieu and brought over to the US by :01 First Second in a move to introduce Americans to the creations of more French artists. I saw this at a bookstore a few years ago and was struck by the simplicity of the artwork, which in some cases would deter me from reading something, but I was interested enough in the overall premise of the story to give it a try. What this graphic novel maybe lacks in story development, Bagieu makes up for in the expressiveness of her characters while keeping to an almost sketchy style. 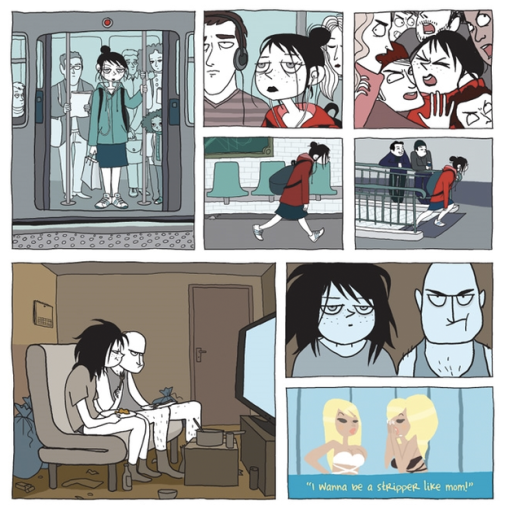 Exquisite Corpse is also the name of a game in France wherein one person writes the start of a story and passes it off to the next person to write another line. The story is passed from person to person, exposing only the most recent line for them to see. At the end this game can make a very disjointed and sometimes surprising story. Bagieu’s story can sometimes flow like this, lacking story development at parts that can make some events seem to come out of left field, but overall she tells a very compelling narrative that challenges the conventions of story progression. Just like the writer in her story, she chooses to step away from formulaic writing, adding twists and turns while providing commentary on a variety of issues.

Bagieu’s commentary on abusive relationships runs all through this graphic novel, both looking at more overt abuse and the more subversive form of mental abuse. Zoe’s time with her first boyfriend was full of verbal abuse in the form of outright insults and general lack of care for anything but sex. When she meets Thomas, his apartment becomes a way to escape from him, but when she finally leaves her abusive ex, she makes the comment that if he had asked her to stay she probably wouldn’t have left. This is a very poignant look at the simple question of why someone would stay in an abusive relationship in the first place. Then comes Thomas who treats her well, listens to her problems, and gives her a place to live that is comfortable and free from verbal abuse. However, a more subversive type of abuse is lingering under his actions. You see, Thomas is only using Zoe as a muse to kick-start his writing career back to where it was. Once he creates his next masterpiece, he also stops caring about Zoe. Here, neglect is the form of abuse. It is only through her discovery of books that she is able to make the kind of human connection that allows her to escape from all the abuse.

Zoe makes it a point to consistently say that she hates her booth babe job, which prompts her friend to point out that “if you don’t like your job, then find a new one.” As a graphic novel created recently, I think this line speaks to many in the younger generation that may find themselves stuck in jobs that they don’t like in order to make a living. We’re often peppered with advice on following our dreams, but there are times when that is not always possible. I think Zoe’s troubles speak to a lot of us in some ways. There is also Bagieu’s characterization of Thomas as an author driven by ego, who’s emotions are controlled by the whims of his fans. The amount of reviews he gets have started dictating his happiness to the point of almost madness. Through this, Thomas’ character comes off as a sort of reflection on how popularity can sometimes change people for the worse, and relying too much on your fans can be very shaky ground to stand on. 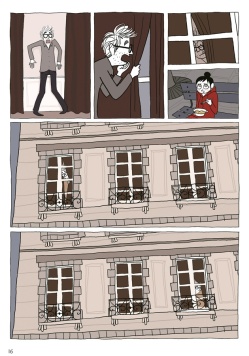 While Bagieu is doing some interesting things with her story, her art can take some getting used to. As someone who can be pretty particular about art in both comics and animation, it took me a little while to warm up to her style. The whole style looks hand drawn with lines that often don’t line up and look shakily drawn. But the appeal is the amount of expression she is able to convey through her simplistic style. The characters are all able to display a wide variety of emotions is interesting ways that add depth to the story happening around them. I found myself enjoying myself at some points just looking at the expressions that Zoe would make throughout the story. Comparatively, what Bagieu accomplishes with her simplicity in terms of character design, I felt was lacking with panel layout. As someone who has seen the kinds of layouts that come with manga and other comics, her panels stuck to a very grid-like pattern, the only variations being size and the occasional lack of outline. Good panel design can help with pacing and emphasis, but I don’t think it is a big enough problem to have detrimental effect on the graphic novel as a whole.

If you’re looking for a quick read with comedy, romance, and plot twists, I think Exquisite Corpse is a great graphic novel to pick up. More comics should be coming to American audiences over the next couple years, and I look forward to finding some more gems from Europe among them.