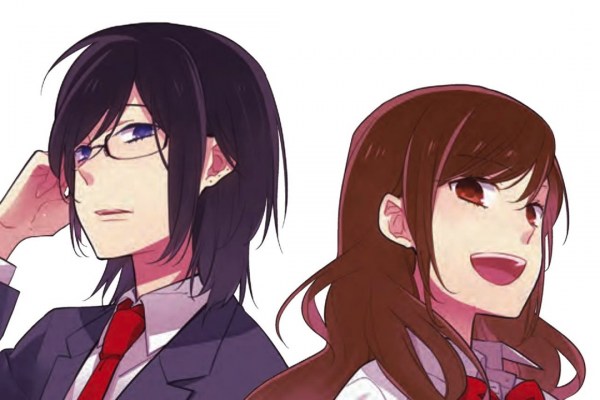 Horimiya takes the concept of public versus private personas that we’ve seen in other manga’s such as Kare Kano and makes a truly entertaining and sweet story out of it. This manga, which at the time of writing reached 75 chapters, is a great read that thoroughly entertained me, possibly making it into my top 10 list. Focusing more on the comedic aspects that each character brings to the story, the overall manga is light on the drama. However, this also makes the serious moments all the more apparent when they do appear, and there are some good ones. The characters struggle with their own sense of self-worth, overcoming bullies and social exclusion to become people you truly want to root for.

If you haven’t had a chance to check it out, here’s a quick synopsis:

With workaholic parents and a little brother that still needs to be taken care of, Hori doesn’t have much time to socialize with her friends. But she also doesn’t want them to know that and the fact that she acts more like a housewife than a teenager at home. Miyamura is a stereotypically nerdy-looking guy with his long hair, glasses, and quiet demeanor. Pretty much everyone in class ignores him and he doesn’t seem to have many friends at all. Outside of school however, he pulls back his hair showing all of his piercings though still hiding his tattoos. When the two of them meet without their public personas, they form an unlikely friendship around keeping each other’s secret. 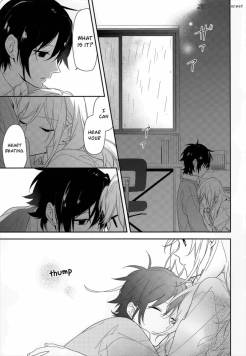 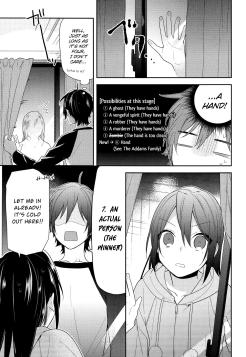 Horimiya is technically a retelling of the 4-koma webcomic Hori-san to Miyamura-kun where the content was redrawn in standard manga format by Daisuke Hagiwara. Looking at the original webcomic, I can understand the need to redraw the characters as the whole thing was amateurishly drawn. However, pretty much all of the content seems to be intact which is the primary selling-point for me. Hagiwara does a great job of redrawing everything especially when it comes to the expressions of the characters. This is especially important considering how much the manga used comedy to tell its story. In terms of detail, I don’t think there’s much in comparison to other mangas of the same genre, but I also don’t really think it needs it. There’s the standard use of screentones for various values, but a lot of the time the backgrounds remain blank. This seems to relate back to its 4-koma comic days, giving it a kind of lighter almost gag-comic feel at times. Some of the best detail though, is in the expressions and characters themselves. 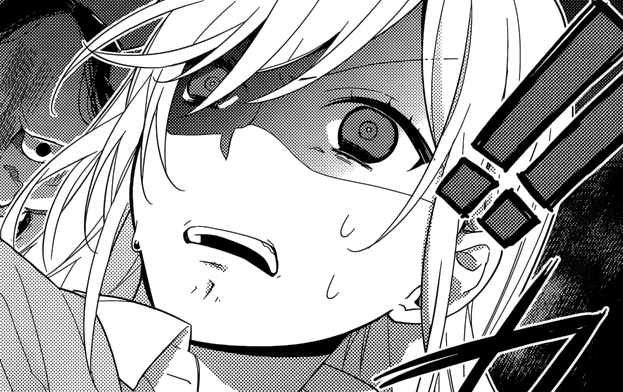 One of the major overarching theme of any Japanese manga will be “the absent father/parent”. Economic struggles in Japan have forced many parents, particularly fathers, into jobs with long hours in order to make ends meet. Add to it the increasing tendency for Japanese women to enter the workforce, and we have a family without parental figures to guide and care for their children. Hori and her brother Souta are left to fend for themselves most of the manga, with Hori picking up the typical homemaker duties of cooking, cleaning, and picking up her brother from school. She eventually comes to a sort of mental conflict however. On one side, she’s coming to like taking on these duties, constantly looking for sales at the supermarket and even becoming a better cook than her mother. But on the other, she is devoid of a social life outside of school. Hori repeatedly comments that she has no idea what kind of music people her age listen to, becoming ecstatic when Miyamura gives her a CD for her birthday. She is first and foremost a teenage girl but she has been forced by society and her family to mature too quickly. I think this is a part of why she attaches a sort of shame to these family duties, thinking that this isn’t how normal teenagers are supposed to act.

Miyamura has a different problem. Both his parents have been present throughout his life, with his family owning a bakery that he regularly helps out at. However, he has a problem with the image he holds of himself. This comes for the most part from his childhood history of being ostracized by his classmates that is slowly revealed throughout the course of the manga. His quiet demeanor and nerdy look made him an easy target for bullies and he could never seem to find a way to fit into the social circles developing in his classes. I think in a way that this may be why he decided to start piercing his ears and getting tattoos. It is speculated on the surface that his is just “stupid” and that’s why he thought it was a good idea. But if you look at how the moments where he is shown piercing his ears are paired with other events in the story-line, they correlate more to an act of self-harm than anything else. Some people resort to cutting, some to burning, but it seems as is Miyamura has resorted to piercing his ears with safety pins. It may also be a way for him to feel like he is changing his outward image even as he is forced to hide these things from his teachers. Outside of school, Miyamura becomes this cool and stylish guy that people start to notice.

Out of these struggles, the romance appears sweet. Two teens learning to express who they truly are after a period where their self-expression was pretty much overshadowed by societal pressures. It becomes a story of teens just trying to be teens in both love and friendships. Their general lack of knowledge about love is clear and their relationship becomes hampered by their lack of self-confidence and self-worth. But that’s a huge part of their growth, learning to overcome these things and tell people how you truly feel. To Hori and Miyamura, an enclosed world is built where they work to preserve their non-public-persona moments together, reserving a side of themselves only for each other. In the end, it becomes a story of loving without judgement as Miyamura mentions that the part he loves most about Hori is her ability to see past appearances. 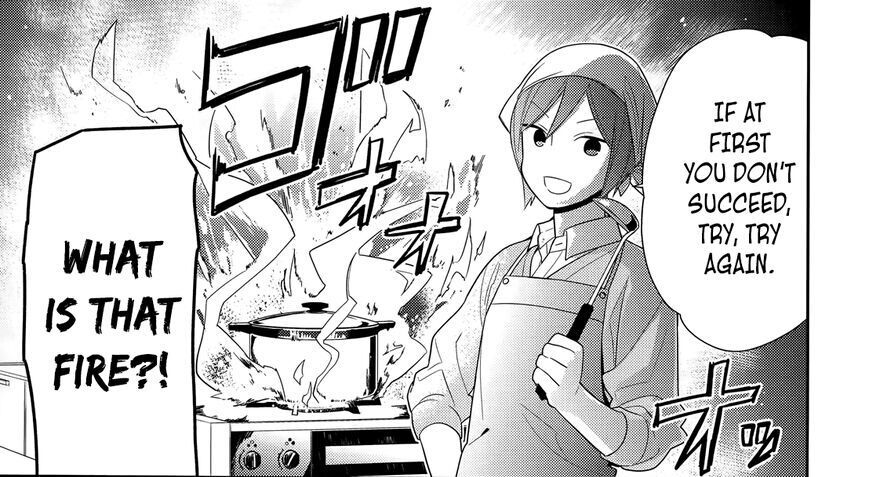 The small drama moments like the ones I mentioned above are all the more noticeable sandwiched together among the deadpan comedy and gags that populate Horimiya. The rom-com moments mainly center around Hori and Miyamura trying to prevent other people from finding out that he has tattoos. This means fooling the teachers into letting him sit out of mandatory swim class or trying to avoid going to a public bath. Eventually a few trusted friends are brought into confidence and the gags start to spread into situations outside of the Hori and Miyamura circle. The side-characters themselves are also given enough room to grow and develop, building their own relationships through the struggles of their own lack of self-confidence. But their unique personalities also add another layer to the comedy, providing a wealth of gags that never really get old.

I think the vast amount of comedy is what kept me coming back to this manga, and when paired with the overall sweet relationship between Hori and Miyamura, it really started to become one of my favorites. I really encourage you to check Horimiya out. I’ve also been told that there are three OVA’s that I have yet to watch based on the manga, so I’m interested to see how those turned out. If you have an opinion of your own or any comments on this review, please leave it down below!