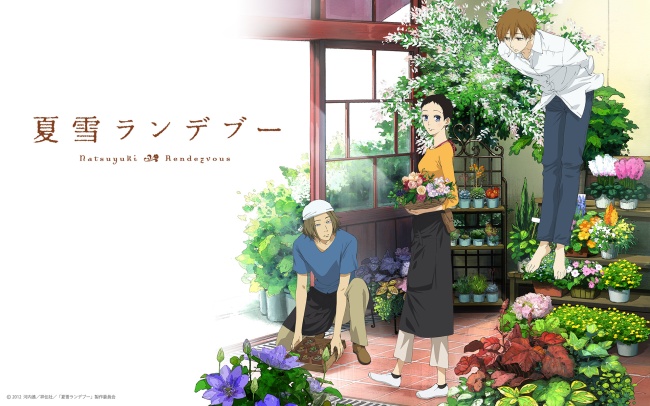 Natsuyuki Rendezvous was simulcast aired and was simulcast by Crunchyroll in 2012, and it’s a shame I didn’t get around to watching it until now. This anime is not your typical romance, geared towards an older audience and dealing mostly with how people process grief over the loss of a loved one. Strong animation and vibrant colors help bring out the show’s emphasis on nature, flowers, and the individual characters that are the life of this anime. Packed with drama, grief, and the discovery of new love, Natsuyuki Rendezvous gives us a show that can be deeply introspective while crafting a tale of the process of moving on after death from both sides of the veil.

If you haven’t had the chance to check it out yet, here’s a quick synopsis:

After falling in love with the owner of a flower shop near his apartment, Hazuki decides to take up a part-time job there. But as he grows closer to Rokka, his manager, details about her past begin to be uncovered particularly when the ghost of her dead husband appears. It just so happens that Rokka’s ex-husband died at a young age due to cancer but still cannot let go of their relationship. As Hazuki tries to do his best to persuade Rokka to go on a date with him, her husbands lingering ghost does his best to get in their way. 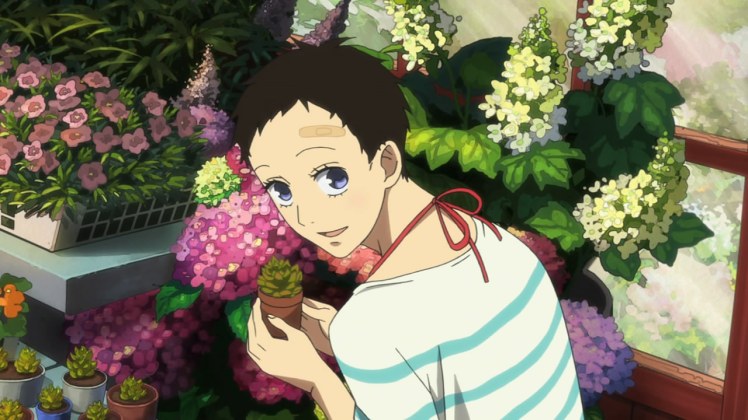 The art throughout this anime is especially vibrant. This works well when paired with the fact that the main characters work at a flower shop and are continually interacting with all manner of plants. The splashes of color in the background provide a nice contrast between the relative sombre tone of the show and the nature of their environment. The animation style stays consistent through the first half of the show before moving into a mix of their original style and a pastel dream-like art to help convey a more introspective and regressive storyline. I do really love the juxtaposition of both animations as the art is there to serve a purpose and convey mood for the overall story arc. With the pastel-styled backgrounds in the second half, we see more into the head-space of Rokka’s ex-husband as he struggles with the memories he wants to preserve and the future he can no longer be a part of. 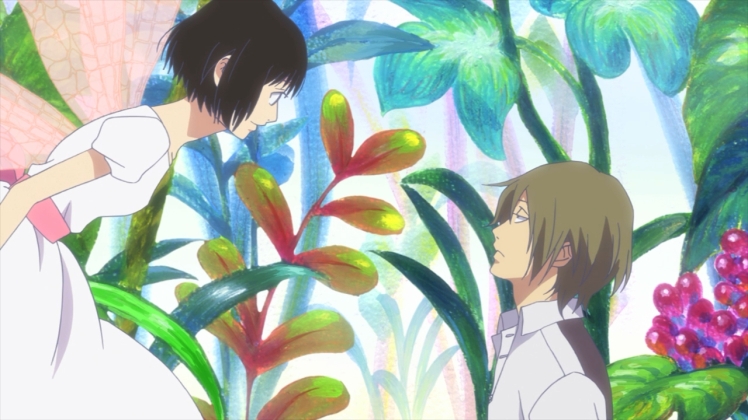 “Who goes through the most pain, the one who dies or the one left behind?” Rokka’s deceased husband, Atsushi, asks Hazuki this at some point in the series and it quickly became a fundamental question that sits at the backbone of this anime for me. Natsuyuki Rendezvous is an anime about loss and grieving for what could have been while trying to find a way to move on. Through the appearance of Atsushi’s ghost, we get to see how both sides of the veil grieve. What I think makes their grief so lasting and powerful is that both Rokka and Atsushi were so young when death separated them. He knew that he would eventually die one day after being sickly all through his life and eventually contracting cancer. However, with death so early in life comes the feeling of missing out. While Atsushi was prepared to die while he was alive, now that he is separated from his sickly body and mortality he has an outside perspective that allows him to feel a sense of longing for what could have been. For Rokka, Atsushi was the first person she ever fell in love with after they met at a flower arranging class. She was struck by the pure naturalism of his bouquets and they quickly fell in love. With Atsushi’s ever present illness, it became clear that if they were going to get married, they should do it soon. In the end, it almost seems as if their relationship didn’t have time to mature because of his inevitable death. Regret over what she couldn’t accomplish, a relationship that both began and ended too soon, and inexperience on both sides may have contributed to how strongly both of them held onto each other after death. 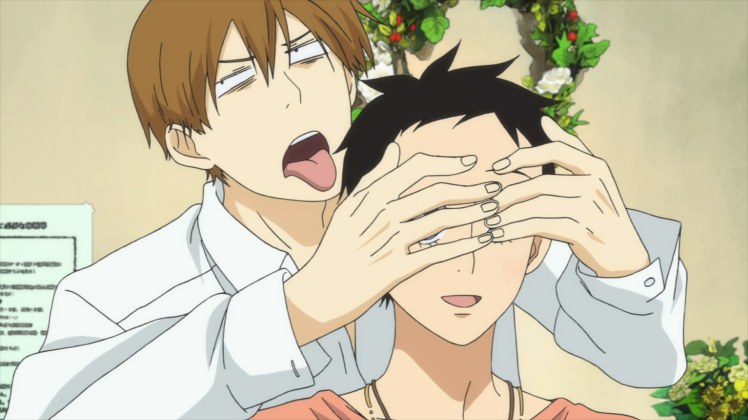 However, what adds an interesting layer of depth to the whole series is the general questionable nature of Atsushi’s ghost. It’s clear that he is somewhat different that he was when he was alive, less philosophical now that he is no longer tied to a mortal body plagued by disease, but some of his actions still make it known that he is dead and the dead should stay dead. The fact that only Hazuki can see him isn’t really a problem and becomes somewhat of a gag throughout the series to help break up the dark tone. As it becomes apparent that Rokka is moving steadily further away from him, the fact that he is a ghost — a being of supernatural nature — becomes more readily apparent. It’s after this becomes clear that the series moves into its second part where the show still relies on gags for comedic relief, but in the background you begin to feel the seriousness of what is happening increase. 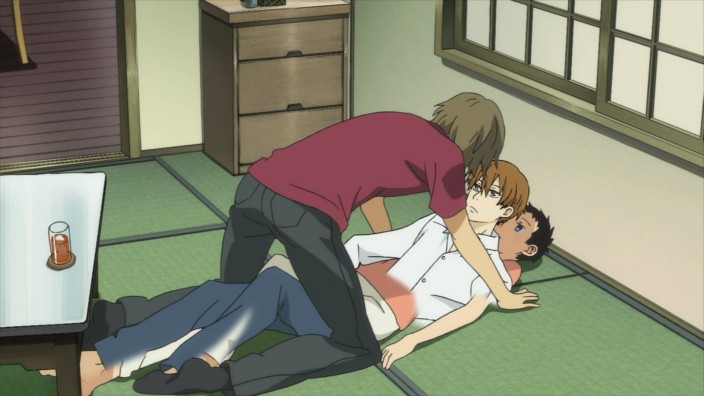 I don’t want to spoil too much about what happens at this point, and I hope you’ll give this show a watch to find out how the story progresses from here. Natsuyuki Rendezvous is a beautiful series full of vibrant color in contrast to its introspective tone. There are still a few moments where I thought the gags brought on by the presence of Atsushi’s ghost are a little too much for the moment, but I am pleased overall by how the series discussed grief and romance. If you had similar or differing thought on this show, feel free to leave them in the comments below!