This will be a short one today mostly because the comic I’m going to talk about is a short-format gag strip that was compiled into a few volumes of its own. Tsurezure Children started as a web 4-koma comic created by Toshiya Wakabayashi. Four-koma comics typically focus on gags and are typically arranged in four panels reading top to bottom or two columns of panels side-by-side. This comic was eventually picked up by Kodansha’s Bessatsu Shonen Magazine and then transferred to Weekly Shonen Magazine. It came to my attention a short while ago when an announcement was made that it was going to get an anime adaptation in the Summer season of this year. It seemed interesting enough, a simple comic that focuses on young high school kids having trouble confessing or talking about their feelings, and it very quickly made me glad I picked it up. 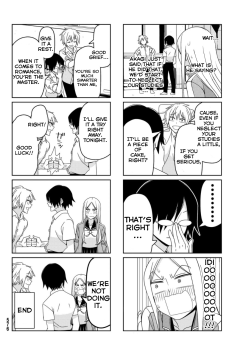 Tsurezure Children is a collection of shorts focusing on a wide cast of returning characters all in some stage of trying to confess their feelings. Some shorts can be as long as a page and others can be a full chapter, but they always revolve around some sort of gag. Whether it’s the president of the karate club falling for her cute kohai or a girl who is unable to grasp that a guy is confessing her feelings to her, the comics wind up being pretty hilarious. However, it’s not always easy to understand Japanese comedy when reading as an American, so I have a feeling a good number of jokes went over my head. I also had a bit of trouble keeping up with the returning characters as each short was connected to a previous one but didn’t follow one after the other. When there is a cast of returning characters that big with so many stories to follow, it can get confusing to try and remember what happened in previous strips. But nonetheless, I thought a good amount of the stories stood on their own pretty well.

As for art, I can say it’s pretty strong. From what I’ve heard, before it was serialized Wakabayashi did a lot of work to update and improve his art, redrawing pretty much all of the comics. The lineart is strong, the backgrounds are limited to nonexistent, and the values are minimal. But this doesn’t detract all that much from the comic as a whole. Gag comics don’t really need flashy effects most of the time to succeed in my opinion, and Wakabayashi does a great job of bringing out the best in his character’s expressions. There are a few moments where I will say the art jumps up a notch, especially when characters overreact to certain things, and it creates a nice punctuation to the gag in contrast to the rest of the art.

The stories are sweet and funny at the same time and the gags rely on typical misunderstandings that were reminiscent of Nichijou or Azumanga Daioh at their calmest. Each character is strong in their own right, gaining steady characterization throughout the course of the shorts to the point where most of them are easily recognized when they do pop up again in the future. A few that I fell in love with were the playboy who thinks he’s god’s gift to women literally to the point of hilarity, the girl who loves to tease her crush and especially his younger sister, and the absolutely clueless and deadpan girl who fails to understand when guys confess their feelings to her.

If you’re looking for some great deadpan humor in a short and easily digestible format, I’d recommend giving Tzurezure Children a try. The stories can be a bit confusing to connect together, but I managed to enjoy most if not all of the shorts that I’ve read so far. The anime begins airing in Summer 2017, and I’m really hoping they turn it into a series of 5 to 10 minute shorts to keep to the general feel of the 4-koma manga. And here’s to hoping that Crunchyroll or someone will pick it up as well. If you’re already a fan of Tsurezure Children, let me know what you think in the comments and if you’re excited about the anime announcement!