I’ve Always Liked You is an hour-long film that appeared on the Crunchyroll simulcast list last season. I was meaning to watch it then, started watching a bit of it, but wound up only finishing it this week. The film is based on a Vocaloid song produced by Honey Works but manages to combine their music and the films plot in such a way that it wasn’t that obvious until the end. With some of their other music interspersed throughout, this anime presents a story about three different couples, each learning about love in their own way whether it be questions about what it means to date, fears about losing a good friend, or what it means to actually be in love. The whole move comes off as a sweet but pretty standard shoujo romance.

Here’s a brief synopsis to get you started:

The movie begins with Natsuki confessing her love for her childhood friend Yuu, but then chickening out and claiming that it was merely practice for her real confession. Yuu eventually agrees to help her practice her confessions, all the while wondering if he can really support her in the end. The next couple is Mio and Haruki, who are close friends bordering on boyfriend and girlfriend. Mio is also having trouble confessing her feelings, wondering what would change if they became boyfriend and girlfriend. While Haruki seems nonchalant about the whole thing, he too is wondering if they should take the next step in their relationship. The last relationship is between Akari and Mochizuki. Mochizuki has always admired Akari from afar, but never had the courage to confess let alone talk to her. Akari is someone who has never fallen in love, but when Mochizuki finally gets up the courage to talk to her, will that change?

There’s not much to say about the music since it’s all Vocaloid, but it is enjoyable and the opening sets a good tone for the rest of the movie. It’s succinct and provides a good introduction to the characters, something that is needed for a story as short as this. It doesn’t have a lot of time to begin with, so using all the extra space in the opening allows the story to get right to the point pretty quickly. The opening also gives us a good look at the animation that will be used throughout, and it is pretty great. Qualia Animation produced a pretty strong movie animation wise, and I really don’t have any complaints in that department. 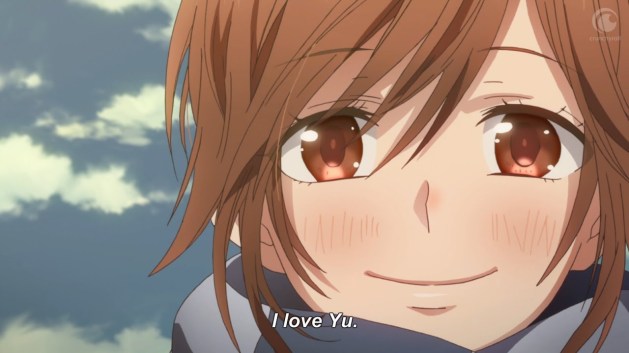 The story is pretty standard but manages to tell three pretty different instances of relationships in an entertaining fashion, even though the time constraints left two stories open to the imagination at the end. Almost all high school shoujo stories deal with some of the same themes: discovering what it feels like to love someone, grappling with how a relationship with a friend will change after a confession, and the process of working up the courage to finally confess. Natsuki’s story seems to be the one they focus on the most throughout the movie, starting off with her botched confession to Yuu. What I do like about this movie, that is sometimes lacking in other shoujo stories, is the switching of perspectives between the male protagonists and the female main characters. We get to the see the process of adolescent love from both sides as Natsuki and Yuu in particular struggle with feelings that are both mutual yet unrequited. We also get to see very similar feelings of being insecure from both sides, telling the viewers that everyone goes through the same kinds of complicated feelings when it comes to love.

The three different stories surrounding Natsuki, Mio, and Akari paint a pretty different picture in relation to one another, though similar in that these are all troubles that adolescent girls go through. While Natsuki and Yuu struggle with what it would mean to their friendship if their feelings for one another were out in the open, Mio is wondering what the difference is between her present relationship and one with the word “dating” attached to it. The concept of how a friendship can change or not change after two people become “official” is something that is touched on but not fully explored due to time constraints. If they had the space, I would have definitely liked to have seen them explore that concept a little more, but I think the movie focused more on the act of confessing than anything else. Though we do get to see a pretty refreshing story between Akari and Mochizuki as one struggles with what it means to love someone and the other has fallen so hopelessly in love that he gets constantly tongue-tied. This was another storyline that didn’t get tied up very well, but led the viewer to the conclusion that while Akari might not fully love Mochizuki yet, she’s willing to try to get to know him better in an effort to figure this whole “love” thing out.

Through all of the short love stories were a couple standard messages about not taking time for granted and going after something with everything you have. I’ve Always Loved You is a film about confessions and how one can work up the courage to put their feelings for another person out into the open. It’s a story about adolescents for adolescents dealing with the complicated emotions that flare up during this time in their lives. I feel like it definitely could have been a story separate from Vocaloid, one that was given a lot more time to explore the issues it presents, but for someone who doesn’t have the time to watch a full shoujo series, this is a great addition to the genre.

Thanks for sticking with me! I know my schedule has been wacky as of late, but I promise it’s for a good reason! Keep a look out on my Facebook page this Sunday for an update on the project I’ve been working on these past couple weeks, and tune in here next week for more anime, manga, and comic reviews.