I wanted to step away from the print arena for a little while to talk about a webcomic I recently came across called Love Not Found, created by writer and artist Gina Biggs. I’m always looking for new stories and comics to explore, and webcomics provide a way for new and experienced creators to tell the stories they want to tell. Love Not Found is a comic that may show a slightly amateurish art style, but it makes up for it for the story it weaves full of futuristic technology and the re-discovery of love. I was hesitant to read it at first, as I can be picky about art styles, but the unique world she brings to life kept me coming back for more.

To give an idea what this comic is about, here’s a quick synopsis:

In the years following the decline of Earth, much of its past inhabitants looked to the stars for their new homes, venturing to new planets and ecosystems to reap out a new living. But as they journeyed the galaxy and technology increased, the need for human contact diminished. Much of the human population gets their pleasure through personalized machines and sees human touch of any kind as revolting. It is in this time that Abeille decides to move from her planet of perpetual winter to one filled with lush, yet alien, greenery. She brings with her one desire, to build a garden in memory of her deceased sister. But that dream quickly becomes eclipsed by another: to feel what it’s like to be touched by another human being.

Like I’ve said, I am fairly picky about art style when it comes to comics, and was very nearly turned off when I came upon this comic. It seemed fairly amateurish, which in itself is not necessarily bad, and can sometimes mean there is a very clear progression of improvement through the course of a comics lifetime. The art seemed to me to be at least semi-inspired by past manga and anime styles, though it lacks the large, detailed eyes most commonly used in the shoujo manga genre. I see it the most in the face shapes, with the slimmer more pointed jaw lines of her female characters and the slightly more defined male face shapes. I also noticed a strong shoujo manga presence in Biggs’ choice of effects, sometimes relying on sparkles or diffused, soft color to convey moments of romance. 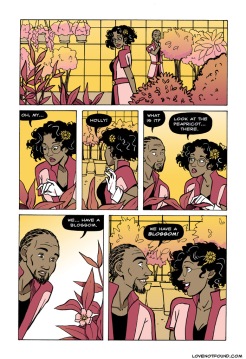 Her use of color really brings out the most of her futuristic world. The vibrancy of her backgrounds and character’s outfits give the reader a sense that they are actually on an alien world populated by beings with futuristic technology and, at times, strange tastes. While I say her general style seems like it still needs some polish, the backgrounds and details she adds to each scene and her overall panel design lend a great deal to making this comic an enjoyable read. Creating designs for alien technology and beings can be difficult for even the best creator, but I think she manages to pull it off, adding greatly to the culture and detail of the world she created.

By setting Love Not Found into the futuristic realm, Biggs has given herself the freedom to create a world with different morals and social structures that seem to comment on or conflict with our own present ones. The setting is one in which human relationships have both progressed and degraded in differing ways. The culture is now one of acceptance for all forms of gender identity, even going so far to adopt genderless pronouns. It is not unusual for two men or two women to form a relationship and neither is it looked down on by others (and indeed she follows some of these relationships as well). However, because of this advancement in technology geared towards human pleasure, many relationships are formed out of convenience and not for the sake of love. To many, love is a foreign concept, having no use in a society that did away with human contact long ago. Some long-held divisions can still be seen though, in the way that intelligence is prized and those with “high-class” jobs segregate themselves from those who do not. As Abeille works in the dining hall at a research center, many in the scientific departments scorn her just because of the work that she does. In this way, Biggs’ world is both progressive and recessive in a lot of ways. But that seems to be the main point of her story as the society is both widely accepting of differing lifestyles yet still manages to hold onto basic human prejudices.

Love Not Found drew me in with its world and characters, and held me there with its love story. It’s a simple premise really, a tale of self-discovery, of finding and feeling love for the first time. It made me think of all the shoujo manga I have read in the past, but with the added futuristic element, Biggs makes this old story refreshing in a way. Abeille is an outgoing woman, at times naive and unsure of herself, but more than willing to put herself out there for her dreams and the things she believes in. She may not be as smart as her family or the people around her, but her good-natured personality draws people to her from all walks of life. From this, in steps Miel, a scientist raised in a household with two loving parents. He’s quiet at times, preferring to spend time with the plants he researches, but has a passionate side that runs deep. Their experiments into intimate contact can at times seem juvenile, treasuring the simple touch of hands, but in a world starved of human contact, the small moments begin to build on each other and stoke the slow-burning fire of their romance. While there was a point where I thought their relationship could have been sped up, skipping a period where they seemed to deny or not notice each other’s affections, in the end it seemed to help serve as way to show more of the people and overall culture. I do think it could have been done in a better way, however, as it gave me flashbacks to shoujo manga tropes of misunderstanding that plague the genre.

I wanted to keep this review brief as the comic is still ongoing, currently on chapter 12, and seems to only now be getting to the major climaxes of the story. But, I also wanted to talk about something different today and introduce you all to one of the comics coming out of the webcomic world. I won’t say this is the best futuristic love story I’ve read, but I will say it’s great for those of us that want an easy read with a touch of deeper meaning to it. I encourage you to give it a shot if this sounds interesting to you, and stick around for more webcomics that may be appearing here in the future!