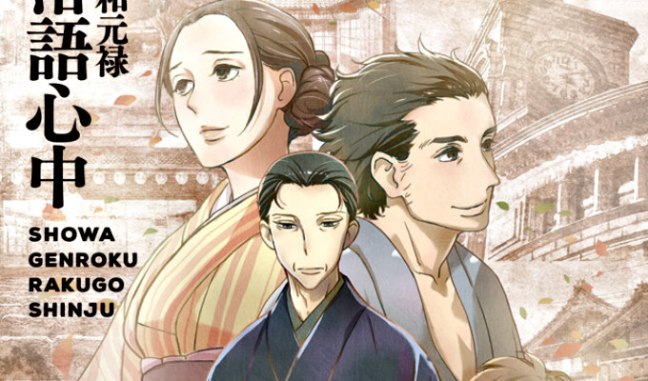 This anime wasn’t even on my radar until I saw it recommended as the best anime of 2016 by Mother’s Basement on Youtube. The concept of the show deals with a part of Japan’s theatrical history that was present before WWII, and then follows it through the post-war era as it battles with the westernization and subsequent censorship. While I’m not entirely sure if I would agree with Mother’s Basement that this show deserves to be heralded as the best anime of 2016, but it comes pretty close. Produced by Studio Deen, the team really showed their skill in the amount and range of expressiveness in the characters, which includes the amazing work the voice actors did in bringing their characters to life.

For anyone who was like me and let this slip under their radar, here’s a quick synopsis:

After being released from prison, Yotaro knows exactly what he wants to do: become a rakugo performer. However, rakugo is an art that is often passed from master to apprentice, with chosen apprentices taking on their master’s name once he retires. In order to be the best, Yotaro decides to learn from the best, but the great Yakumo has never taken an apprentice in his whole career. Something about Yotaro intrigues Yakumo, though, and he finds himself joining Yakumo’s dysfunctional family that includes a red-headed, fiery adopted daughter. After finding out that her real father used to be an apprentice under Yakumo’s predecessor at the same time as him, Yotaro convinces his new master to tell them the story of the now deceased Sukeroku which takes them all back to the 1930s.

As Mother’s Basement explains in his review, the name of this anime says pretty much all you need to know to get a good idea of the plot, that is as long as you understand Japanese. But as he gives a comprehensive translation of each word in the title, I think there’s really only two words here that you need to understand before going in, any more may spoil a plot that’s better experienced first-hand. The first word is showa that references the point in history in which this series takes place, namely the Showa Era in Japan. This era spanned from 1926-1989 with the rise of Emperor Hirohito. Knowing this allows us to understand some of the historical background that heavily influences the story. This was a period of extreme change, culturally and politically, that in some ways completely altered the view of the Japanese people to aspects of their culture that have been a staple up until then. Rakugo is the next word we need to look at as it pertains to the whole driving point of the story. Rakugo doesn’t have a direct translation but instead pertains to a theatrical comedy style where a performer sits in the center of a stage and is only allowed to use their upper body, voice, and a few props to tell a story. Often, they are portraying more than one person and must rely on expressions, mannerisms, and voice to convey those characters to the audience in the best possible manner.

Since one of the key aspects of a rakugo performance is their use of expressions and mannerisms in order give form to the particular story, so it makes sense that one of the main things I would grade this anime on is the quality of animation in those areas. I have to say that they passed with flying colors. The story of the anime is such that there really aren’t many scenes that need a great deal of attention from the animation team in contrast to many of the action animes airing that season. This means that much of their attention could be focused on the little details, including expressions, body movements, and world design. It’s these little details that contribute to the high level of immersion I felt throughout the series. I loved the fact that each small movement felt natural and essential to the meaning the writers were trying to convey, especially when it came to their rakugo and theater performances. Reproducing the feeling you get from being in a theater is complicated, but the director managed to accomplish that through the combination of the detailed animation of the rakugo and cuts to the audience to provide context for each point in the story. 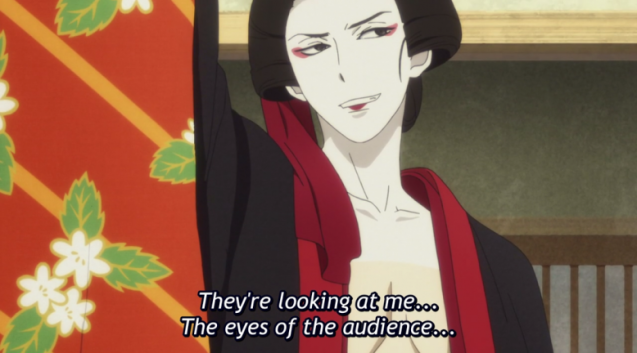 Besides the animation team, the voice actors and music team really helped tie everything together. Like I mentioned, rakugo is a performance art that includes little actual movement. In essence, each actor has to display as much as possible without using half of their body or any real props. This means relying on their voice to convey emotions and different personalities of characters. I don’t think I was disappointed with any voice actor’s performance in this series. They all managed to convey a wide range of emotions, personalities, and even ages. I hate to say it, but I highly doubt the voice actors from Funimation could pull this off. There are a lot of great voice actors in America, don’t get me wrong, but so far I haven’t heard the same caliber come out of dubbed anime as I have from this one show. I really don’t know how I’d feel if this got dubbed at some point. Moving on from that though, the music scores in this show lent greatly to the overall mood and world of Showa Era Japan. Covering some traditional Japanese shamisen music to post-war jazz helped lend the audience a more specific sense of context and feel. I also always have a soft-spot for animes that incorporate jazz music in some way, as you probably could tell from my Nozaki-kun review.

There are so many things to unpack about the story, but so little space. I’ll try and keep it brief the best I can. Showa Genroku Rakugo Shinjuu is all about frame narratives and the reappearance of several key themes. Combine this with the drama and you get an anime about storytelling, framed as a story, that comes together in the end into something that could easily be its own rakugo story. For starters, we are thrown into the narrative in the later part of the Showa Era when Yakumo is getting on in years and sits as the head of the rakugo association. Yotaro’s appearance and demeanor sparks something nostalgic in Yakumo and he agrees to tell the history behind the death of Sukeroku, who was like a brother to him. This starts the frame narrative that delves back into the 1930s when Yakumo was just an apprentice, then under the name Kikuhiko. Through his telling, we begin to understand what made Yakumo accept Yotaro as his apprentice. In him, Yakumo saw an echo of Sukeroku that comes out in his style of rakugo, brash demeanor, and general enthusiasm. But looking back, you can see this theme of a pair of apprentices competing for attention reflected back into the family’s history starting with Yotaro/Konatsu to Kikuhiko/Hatsutaro(Sukeroku) to the previous Yakumo/Sukeroku. Each pair had this competing ideal of what rakugo should be and how best to perform it. 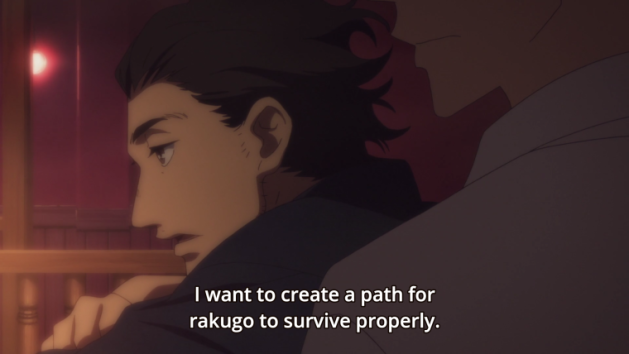 The Showa Era was a time rife with change for Japan as they recovered from WWI, dealing with the newfound interest of the Western world trained on the East, plus going through WWII which brought on American occupation and a huge amount of cultural change. So many aspects of Japan changed during this period, and through this anime, we see specifically how big of a hit rakugo took both to their content and the method of performance. Traditional Rakugo incorporated a variety of stories, with many performers gravitating to one genre of story over another. Before WWII, it was more acceptable for these storytellers to perform more raunchy or bawdy tales of sex and infidelity, but as American occupation started, Western ideals began to be imposed upon Japanese culture. This included their more conservative opinions on sex and relationships. In order to maintain a good relationship with the West, many cultural and entertainment establishments began to be shut down or started to self-censor their content. This meant that rakugo either had to adapt or risk being kicked to the curb with the likes of brothels and geishas. One of the key conflicts we see throughout is whether rakugo should adapt its performance style, moving more into the realm of theater, or try to preserve itself as a piece of cultural history. We see this reflected in the main conflict between Kikuhiko and Hatsutaro, as Hatsutaro wants to expand his performance to bring it into the modern era while Kikuhiko feels it should be preserved as a matter of tradition. 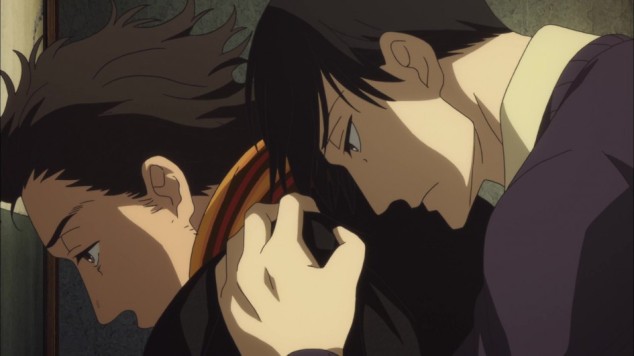 However, rakugo is really only the base for a much more involved story filled with drama, romance, and tragedy. The main plot focuses on the relationship between Kikuhiko and Hatsutaro, their need for their master’s acceptance, and their individual relationship with rakugo. Kikuhiko is, I think, one of the most complex characters within the show. He is brought to the rakugo school at a young age after an accident left him unable to become a dancer, and is forced to make a place for himself and come to terms with another style of performance that he’s not sure he can like. His story involves his quest to find a place for himself and create his own style of rakugo while dealing with normal life concerns like finding love and trying to make a living. Hatsutaro, in contrast, is this brash character who already knows what he wants to do for the rest of his life, is blessed with a talent all his own, and seems carefree to the point of being lazy. They both go through a huge amount of growth throughout the series, diverging at a point in almost opposition to their original plans. I won’t go too much into the romance as that would spoil something that I’d rather let you experience for yourself, but just know that it’s packed with drama reminiscent of one of their rakugo stories.

I feel like I’ve run out of time for this one. There is so much more I could talk about with this series, and maybe I’ll have another chance with the second season airing this year.Or perhaps I’ll end up doing some spin-off scene analysis, who knows! I highly encourage you to give this series a try, especially if you like historical dramas, and let me know if you agree with Mother’s Basement’s assessment that this was the best anime of 2016 in the comments below. If not, what was your favorite? You can also check out my first impressions of the Winter 2017 season here, which includes a new season of Showa Genroku Rakugo Shinjuu. Stay tuned for more manga, comic, and anime updates coming soon!