Daytripper is a comic that melds discussion about death, friendship, and love into a story with so many twists and turns that you almost can’t keep up. Created by the famous twin-team of comic artists Gabriel Ba and Fabio Moon — who you may recognize from a previous review — and published by Vertigo in 2011. This comic has been on my list to read for awhile ever since I saw samples of their art in passing, and even more so after I read How to Talk to Girls at Parties. I finally got the chance to borrow it out of my local library, and I was not disappointed. Both the story and the art are finely crafted to emphasize themes of living life to its fullest and appreciating the time you have with people.

The story of Daytripper follows the life of a man named Bras who works as an obituary editor at his local paper. He spends most of his time writing about the lives of people who have recently passed while trying to make a name for himself as a novelist. In each chapter, Bras takes us through a different segment of his life, whether it be his childhood playing with his cousins on a farm or the time he first met his future wife. However, each event inevitably ends in his death, highlighting the inescapable nature of death and cycle of life itself.

I really can’t say enough about the art throughout this comic. It’s really not everyday that a comic artist uses watercolors to the extent that they are used here, creating a truly unique style that can be recognized throughout their previous and future works. The colors are vibrant with deep shading and values that give extra pop to certain scenes. The watercolor itself creates an almost fantastical feel to the book in moments, allowing for the blending and overlaying of different scenes. It fits well with the overall story and feel of the comic as Ba and Moon try to emphasize moments of fantasy and almost dream-like states.

I think, over time, I’ve found that I’ve started gravitating to artists who use a lot of watercolors and interesting blending techniques in their comics. Maybe it’s because I have an art background myself or just that it’s different from standard comics so therefore more interesting to me. Who knows? I just know that each page of this comic was a pleasure to both read and look at because of how they’ve chosen to do their art. Even the cover of the 2011 combined volume is testament to this: Bras sitting on a bench with his dog, the world behind him drifting up over his head like in a cloud, the stark white and vibrant colors creating appealing contrast. I especially love how expressive the character designs are as well. The line work is bold in places, adding dynamism to each form. The artists also do a great job adding expressiveness to their character’s faces, allowing for moments of deep emotional impact. Combine this with the tendency for Ba and Moon to focus on the little moments or details, and we get art and story that is full of depth.

Ba and Moon’s art pairs well with the story and themes they try and tell. Influenced by their Brazilian heritage, we see a lot of emphasis on family and see it reflected in the name they chose for their main character. But most of all the colorful artwork contrasts well with the darker tone of the story overall as it journeys repeatedly into the land of death. To go back to the origin of Bras’ name, however, we see that the authors used his name as a way to characterize not just Bras but his father as well. The name may refer to a famous Brazilian literary character named Bras Cubas who was featured in the work The Posthumous Memoirs of Bras Cubas. This shows Bras’ father’s connection to the literary world as a writer himself because of the fact he named his son after a literary figure. This also means that the character of Bras in Daytripper is a sort of homage to this Bras Cubas who narrates to the reader his life after he has died, connecting everything back again to death. 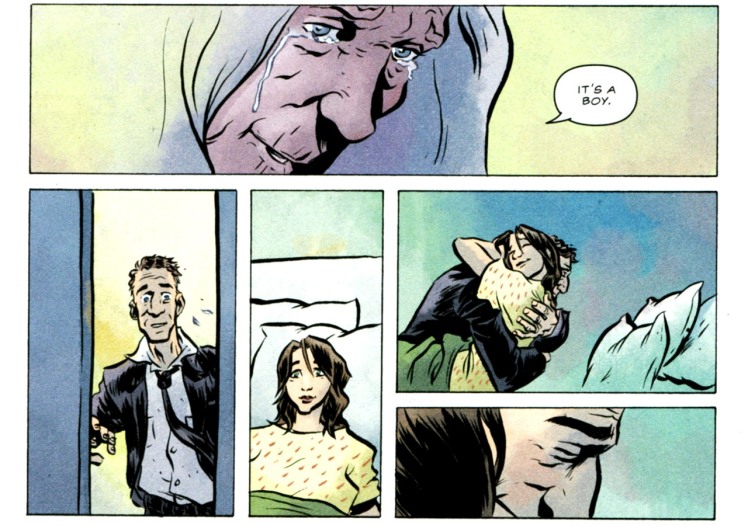 But even if each story ends in Bras’ death, those stories have a lot to tell us about life, love, and family as well. Take the story of Bras when he was a child going to visit his extended family in the countryside. Not only does it paint the picture of a close-knit family, but it also exposes us to a very innocent kind of love. While playing hide-and-seek in the woods with his cousins, he finds himself hiding behind a tree with one of his female relatives around his age. By this point Bras is close to the age of puberty. In the short moments of that that game, they kiss innocently and Bras watches as she runs away, losing the game in the process. I think this short moment is testament to how many different ways love can manifest, whether it be an innocent kiss during childhood or the heart-throbbing meeting of eyes that accompanies love-at-first-sight.

This is the other strength of Daytripper, its ability to show us the multitude of different ways people connect with each other or fail to connect. The whole collection of stories revolves around how people choose to live their lives, what chances they take, and how life can be cut short at the most inopportune moments. This is reflected well in the obituaries that end out each chapter, punctuating Bras life for us. Following these moments up with other chapters that look at lives the other iterations of Bras never got a chance to see also creates a great opportunity to compare and realize how life can be so different because of the effects of random chance.

I really can’t recommend Daytripper enough. If you have a chance to read it, give it a shot and let me know what you thought in the comments below! If you’ve already read it and want to share your opinion, feel free as well!