As you probably guessed from my review of Season 1, I’m not a huge fan of this series, so it was with much procrastination that I finally decided to sit down and binge through all of the episodes. And, I have to say, my opinion hasn’t changed that much. I was kind of hoping that season two would at least be a little better, but I’m still seeing a lot of the same problems as I saw in the last season. The major problem being that Haru, one of the major characters, is boring and flat. This does not mean, however that the show doesn’t touch on some interesting subjects and display some pretty good animation, but these good points seem only skin-deep to me.
If you haven’t had a chance to watch the first season yet, I highly recommend watching it or at least reading my season one review before continuing. There was a huge point of contention among anime and yaoi fandom with this series that I touch on there that I won’t be returning to in this review. For those who need a refresher on plot, Super Lovers follows the life of Haru who goes to visit his mother in Canada only to find that he has a new adopted brother named Ren. While he prefers the company of dogs over people, Ren quickly becomes attached to Haru, vowing to follow him to Japan once he is older. However, when Haru returns to Japan, he is involved in a serious accident that takes the lives of his father and step-mother as well as wiping all his memories of Ren. So when Ren shows up at his door, he must figure out how to live and relate to his family again. 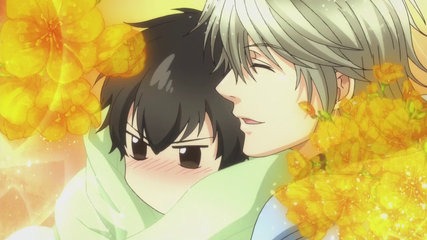 We left off at the end of Season 2 with Haruko’s return to Japan and her subsequent threat to take Ren back to Sweden. This then becomes a good third to half of the conflict in this season, with Haru vacillating between fear that Ren will leave him and believing Ren when he says he’s going to stay. This is also a good starting point to talk about why I think Haru is such a terrible character. It’s his inability to to trust Ren when he speaks honestly about his feelings and his general needy or unconfident nature that rubs me the wrong way for the most part. For the better part of this 10-episode run we see Ren repeatedly telling Haru that he is absolutely not leaving but still Haru is shown worrying about it. After a certain point, it just becomes annoying, and it makes me contemplate more the relationship that Ren and Haru seem to have, but more on that soon. I can understand the car accident that took his parent’s lives and the following amnesia and psychological distress formulating his actions now, but I feel like we are only told these things not shown. We get a short flash-back glimpse of the kind of mental state he was in right after the accident as Aki and Shima are discussing it around the anniversary of the accident. However, what we don’t see that much of is the remnants of that illness in Haru that all the characters seem to be so worried about. What we get instead is a man that might drink a bit when he’s depressed, or get jealous when it comes to Ren, but is mainly just way too needy and dense when it comes to Ren. What I have been wanting to see since Season 1 is a clear progression of recovery for both Haru and Ren where we see them at their worst and then how their relationship helps one another recover.

What we get instead when it comes to their relationship is a confusing mix of paternal and romantic feelings that gets blended together into something relatively uncomfortable. I talked a bit about this in my review of Season 1, mainly that this meshing of paternal and romantic feelings from Haru is probably what makes people feel uncomfortable about their relationship. We see a continuation of this in Season 2 as Haru tries to come to grips with separating Ren out as not just his little brother. This might work too if the writer actually made Haru’s attitude toward Ren change over time, with him treating him more like a lover rather than a brother, but I don’t think we ever get to the point of seeing a clear dividing line by the end of these 10 episodes. He winds up finally getting it through his head that Ren doesn’t want to be his brother and declares their relationship clearly to those around him, but his actions towards Ren don’t seem to change much. We still see a lot of that paternal and hovering instinct in Haru as well as his need for reassurance. When we factor in the blatant sexual moments that seem more like a gimmick to attract yaoi fans than actually furthering their relationship, their relationship doesn’t make for a great romance.

A new character also makes an appearance in this season, that of Natsuo or Haru, Aki, and Shima’s cousin who has moved back to Japan to take up a profession as a host at the very same bar that Haru used to work at. This new character just reinforced my opinion that the writer of this series is not very good at writing interesting characters. For one, he’s created to be basically a clone of Haru down to his physical build and the name he uses at the bar. Additionally, his backstory of why he is not on good terms with his cousins stems from childhood feelings of neglect because Haru wouldn’t pay him enough attention when they were kids. I honestly couldn’t see him as an interesting character with his backstory the way it was. How many years has it been since he was a child? Keeping decades long grudges like that just makes him seem immature and flat, like the writer really couldn’t think of a more interesting conflict for them to have. Not to mention his presence seems to only be needed as a catalyst to move Haru and Ren’s relationship along through the jealousy he produces in Haru. Natsuo’s presence is honestly so inconsequential that if he was removed, I honestly don’t think it would negatively affect the story.

With all of the negatives about this series, I do have to reiterate some of the positives I saw. Most of these involve the character of Aki, Shima, and Ren who seem to be the backbone holding this series together. Their growth from a troubled family who has to contend with a new brother who has a host of his own problems to brothers who truly understand each other is one of the best parts of the series. I still feel like Aki and Shima don’t get the amount of characterization they deserve, but they provide a nice stability to Haru’s tangled personality. Ren definitely gets the bulk of the characterization in this show, going from a closed-off child at the beginning of Season 1 to a confident yet quiet teen in Season 2. He still needs Haru’s support at points, but we see him stretching his independence and doing things for himself more as the series progresses. We also get to see what kind of interests Ren has outside of his relationship, his weaknesses and strengths. His love of dogs and science as well as his lack of interpersonal skills and language abilities has now been strongly reinforced. We also see through Haruko’s visit just how much she means to him as a mother figure. The character of Ren is probably one of the only reasons I continued to watch this series.
If you have other thoughts on this series, feel free to leave them in the comments below. Also make sure to follow me on Facebook and WordPress for updates on when reviews go live. Hopefully this season means the end of this series for good and opens the way for some other great yaoi to get adaptations. If you’re looking for some other great yaoi to watch, be sure to check out my reviews for Love Stage and Sekai-Ichi Hatsukoi.