Kobayashi’s Dragon Maid has to be one of the few yuri animes I actually like. It manages to combine great animation and enjoyable characters in such a way that you almost feel like you’re not watching a typical yuri show. The anime was originally part of the Spring 2017 simulcast season on Crunchyroll and ran for 13 episodes. Just recently, they released the 14th episode, a Valentine’s Day special OVA that brings us back to the world of cute dragons and ridiculously lovable characters. Compared to the previous episodes, this special may seem a little empty as it focuses on more mundane aspects of the character’s lives rather than the fantastical. However, I think the episode holds a lot of great, small character moments, and, while the episode doesn’t have the regular crazy dragon moments, it makes up for it in the quieter exploration of relationships.

If you haven’t watched Miss Kobayashi’s Dragon Maid yet I highly suggest you do (and also read my review of the full series here). The basic story centers around an office worker named Kobayashi who opens her front door one day to find a large dragon staring back at her. The dragon transforms into a cute maid girl and introduces herself as Tohru. Apparently, the night before Kobayashi stumbled into the forest while drunk and found Tohru, and subsequently offered her a place to stay. Kobayashi now finds herself with a maid that happens to be a dragon who also happens to be madly in love with her. The recent OVA gives a look at their first Valentine’s day together and a hot spring trip with friends. 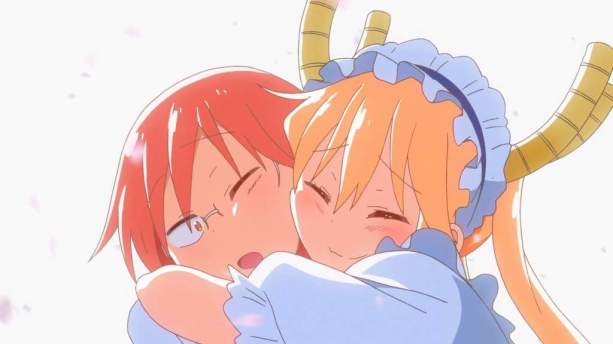 Kyoto Animation has always done a fantastic job on this series, and this OVA is no different. We still get the super catchy and weirdly chaotic opening that this anime is known for and quality animation throughout the episode. I was a little disappointed that there wasn’t a high-action moment that would allow Kyo-Ani to show off a bit more, but there were certainly areas that were fun to watch. One of the best parts of the animation is the expressiveness of the characters. That moment when Kobayashi warns Tohru that she’ll lose trust in her if her chocolates have something weird in them gives a great fierce expression from Kobayashi. They also, as always, do a top-notch job on the moe aspects of the show. Kanna has risen to the title of moe goddess in the anime fandom since the show aired, and of course we get a lot more scenes with her being adorable.

The OVA follows a fairly standard Valentine’s Day special plot line. The characters give and receive chocolates from the people they like and then the whole group of them go on a trip to a hot spring. We see this kind of thing time and time again in many series, and I think that is why I’ve been seeing people saying this OVA is fairly empty. It certainly lacks some of the high-energy fantasy scenes that made the anime so great, but I also think it gives us some great small moments of characterization that made this episode seem fairly sweet overall. Take the main plot line where Tohru is trying to craft chocolates that will make Kobayashi fall deeply in love with her. She decides to add a love potion, but when she tries to actually give the chocolates to Kobayashi, it winds up becoming a learning experience for Tohru about the importance of trust in a relationship. Worse animes would have used the chance to create a moment of fanservice — and later on there is a slight moment like that with Kobayashi gets drunk — but the main takeaway winds up being an important moment of character growth that carries on throughout the episode. At the end, we see Tohru give Kobayashi another batch of chocolates, this time sans the love potion, and their relationship takes a step forward because of that new level of trust.

One of the other relationships I love in this series is Takiya and Fafnir, two people who I think don’t get enough character growth on the show as a whole. I was pretty happy to see they both got some moments to shine this time around. Fafnir is not a dragon that trusts people, but in Takiya he has found someone he can relate to through the world of video games. There’s a nice moment in the first half where Takiya comes home from work and finds an in-game sword gifted to him. Whether Fafnir knowingly gifted it to him for Valentine’s Day or just because is not really made clear, but we can tell that Takiya is touched by this gift and we see that it’s Fafnir’s way of showing he cares (even after he tells Takiya to gift him the same one). We also get more characterization for Takiya personally through the hot spring arc of the OVA. We see that not only does he consider Kobayashi a close friend but that he is extremely grateful to have found a place he belongs with the current group. He also apparently set up the hot spring trip as a way to give them all a chance to decompress and feel better after the things that happened at the end of the series. I honestly almost want to say Takiya and Fafnir’s relationship is my favorite part of this show.

Besides my want for more action scenes in the episode, I did have a few problems, mainly carry-overs from the main series. Both of these problems have to do with the relationships between a lot of the younger characters on the show. Take Lucoa and Shouta’s relationship. Many of the moments between them seem to devolve into some sort of semi-creepy attempts to further their relationship. I say semi-creepy because Shouta is a young boy, making the age-difference between them staggering. The show also likes to play up the sort-of gag that Lucoa’s boobs are massively oversized, with Shouta often pressed up against them. For Valentine’s Day, Lucoa’s present to him was going to be herself covered in chocolate, something Shouta shot down immediately but it is no less creepy. Then we have the semi-sexualization of minors in Kanna and Riko’s relationship particularly the two scenes where Kanna is licking Riko’s finger and Riko is trying to wash Kanna’s back. It can still be seen as a fairly cute relationship, but there are moments where I think it’s pushed a little too much for the moe crowd.

Overall I did enjoy the OVA and it was great to return back to the world and characters of Kobayashi’s Dragon Maid. Let me know in the comments below what you thought of this OVA or what your favorite moments were from it. I hope you all had a great Valentine’s Day (or regular Wednesday). I was tempted to post this review then, but it seems like everyday is Valentine’s Day on this blog so I figured I’d give you all a break. If you haven’t already, you can check out my Anti-Valentine’s Day post here, where we take a break from romance for one day and explore a cult classic.