The Secret Loves of Geeks is a follow-up to the previous anthology The Secret Loves of Geek Girls, which I admittedly need to read as well. I’ve been seeing this one pop up on my Twitter feed for the last couple weeks as its release date came and went. Ultimately, the cover, with its multitude of meme-themed cats and the big-name contributors really convinced me to pick this one up as I was browsing through a comic store. Anthologies have always been a draw for me, as they give me a way to discover new artists while reading a diverse collection of stories. So far I’ve reviewed two anthologies focusing on romance and sex, and I’m glad to be able to add this one to the list as it definitely doesn’t disappoint in its content.

If the name hasn’t given it away, this anthology features prose stories and comics  from a diverse cast of creators, artists, writers of geek culture about their most heartbreaking or uplifting tales of love, sex, and dating. It includes contributions from such professionals as: Patrick Rothfuss (Name of the Wind), Margaret Atwood (The Handmaid’s Tale), Hope Larson (Batgirl), Chris Roberson (iZombie), and Jamie McKelvie (The Wicked + The Divine). The anthology is edited by Hope Nicholson and is currently published by Dark Horse. 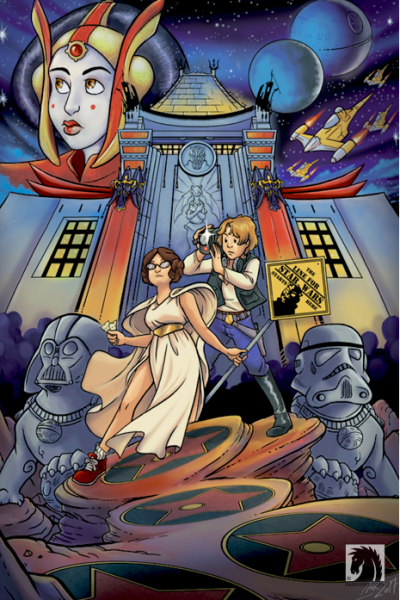 The stories featured range from weekend-long relationships at conventions to the sentimentality of certain shows and media to learning about one’s sexuality through media. All of these stories have a few key themes in common though like the relationships that develop with the media we watch and how people relate to and learn from the characters they read about and watch in movies or TV shows. This then comes back to the issue of representation in comics and geek media, an issue that’s become more and more talked about as big blockbusters come out in theaters like Black Panther and Wonder Woman. As we see through many of these stories, people need characters to relate to in media, especially kids who may be questioning their sexuality or identity. It not only helps them come to terms with what they’re feeling but makes them better able to feel confident about themselves.

In more ways than one, the media we consume can affect our lives in huge ways. Below, I’d like to highlight four stories from this anthology that I thought were particularly good or telling about our relationship with media:

These are just four out of the many stories and comics that appear in this anthology. I highly encourage you to pick up a copy and check it out if you found this review interesting. And when you do, be sure and come back to tell me what you thought! I’m hoping to also pick up the volume before this one at some point as well, but you can also be sure there will be plenty more anthology reviews in the future.