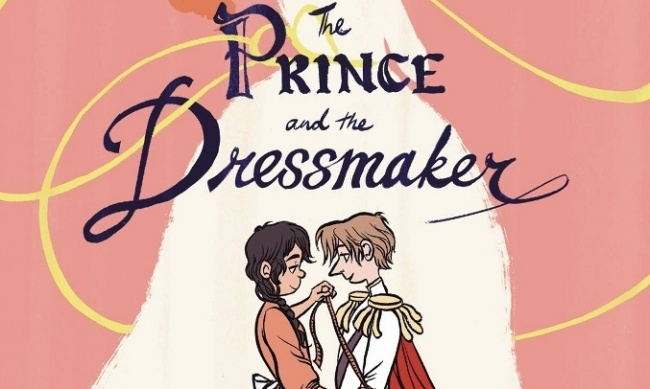 I’ve been hearing so much talk about this particular graphic novel since before it even published. Reviews from Publisher’s Weekly, School Library Journal, Booklist, Nerdist have all been popping up with rave reviews as well as many recommendations from illustrators and cartoonists all around Twitter and other social media platforms. I’ve read some of Jen Wang’s books before, In Real Life for example, and have generally enjoyed them. I figured it was about time I picked up a copy for myself, and so swung by my local bookstore on my way home from work. As I was handing the book to the cashier, she also took the time to recommend the book to me, telling me just how cute and genuinely awesome it is. After getting a chance to read through the whole thing this week, I have to say, none of these recommendations were wrong. Jen Wang has truly created a charming story steeped in the discussion of gender expression and queerness that had me both on the verge of tears and laughing out loud.

The story of The Prince and the Dressmaker revolves around a young seamstress by the name of Frances who, after making a scandalous dress for a young lady, gets hired to be the personal seamstress to a mysterious high-class woman. It’s her dream come true. The only problem being that the mysterious woman just happens to be young Prince Sebastian of Belgium who wants Frances to make the most incredible dresses for him to wear when he goes out as Lady Crystallia. But when you’re a prince, you’re parents expect you to find a princess to marry, and Sebastian’s dual lifestyle quickly becomes threatened. 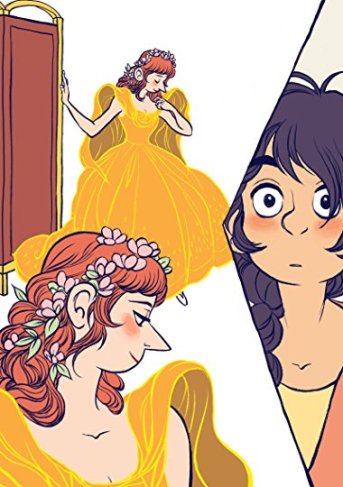 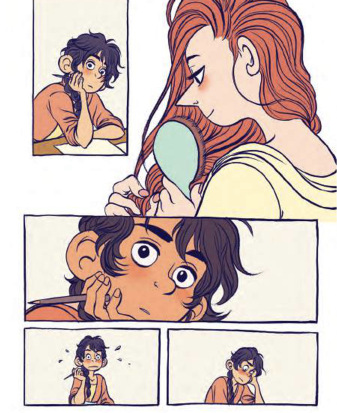 Jen Wang has done a great job with her character designs and colors throughout the graphic novel. I love seeing the kinds of characters she creates, from the burly King and father of Prince Sebastian to the Prince’s transformation into Lady Crystallia. It was interesting see just how different Crystallia seems from Sebastian, both because of the clothes she wears and the change in her mannerisms and expressions. As Sebastian, he kind of just seems like a skinny, unassuming Prince, very different from some of the overly-manly men around him. As Crystallia, she gains confidence and her expressions become more lively, becoming a bombastic woman who loves to show off at parties. Wang’s use of expressions is further enhanced by her panel design. She’s not afraid to play with the positions of the panels on the page to really draw your eye to a particular moment, look, or touch that becomes meaningful to the story. I especially love when artists have the skill to forego dialogue and just rely on the power of their sequential art, and it’s the pages where Wang pulls this off that I love the most. 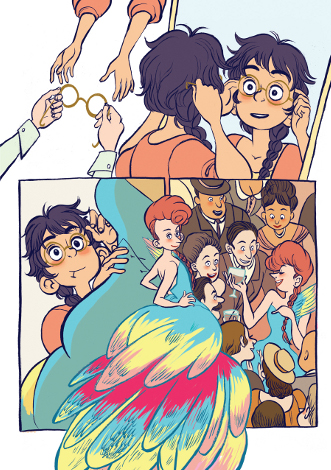 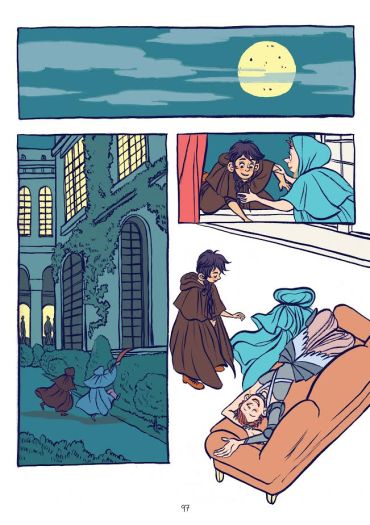 The Prince and the Dressmaker is a story full of fashion and artistic expression, and I was not disappointed when it came to the vibrant parade of dresses created by Frances. They all reinforce the colorful world Wang has created as well as allow for more opportunities of characterization for both Frances and Sebastian. The half-armour dress and the red lace dress have to be some of my favorites. The armour dress is both creative in its design and provides a clearer metaphor for how Sebastian sees his relationship to his clothes, dresses in particular. The red lace one, I honestly just like. It creates a great pop of color in the corner of the page combined with his bright red wig. If, after all this, I had to make one complaint about her art though, it would be the way she draws hands and just how much the ears on her characters stick out. I know all of these are nitpicky things, but for the hands at least, it becomes a problem when there are shots specifically focusing on them. As an artist myself, I know just how hard they are to draw so it’s not a super important issue, but I would be interested in seeing if this aspect of Wang’s art improves in future novels. 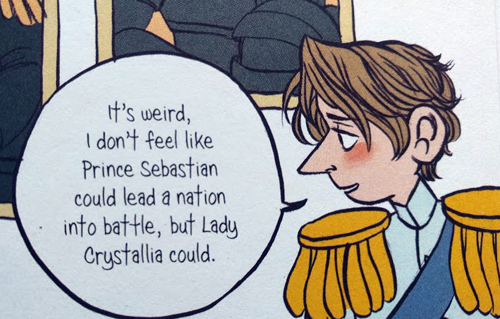 Sebastian and Frances’ story presents a great coming of age tale full of relatable characters and complicated issues presented in a positive and interesting way. Sebastian is a character full of dualities constantly in conflict. He likes being a Prince but also enjoys taking on the persona of Lady Crystallia. He wants to become a good King for his father’s sake but also wants to become involved in fashion. These conflicts of identity both draw Frances in and wind up pushing her away. It’s a story that I feel many transgender, gender-fluid, or boys who just want to explore their feminine side could relate to: how to keep true to who you are in the face of societal pressures and expectations. Sebastian is expected to be the macho prince who marries the princess and takes over his father’s kingdom, but his true interests lie in fashion. The persona of Lady Crystallia provides him an escape from his reality and a way to feel more in control of his life. She’s a powerful and influential woman who has the courage to do whatever she wants, and the dresses Frances makes almost become like an armour against a harsh society.

Frances becomes Sebastian’s one true friend through all of this, attracted both to him as a prince and Lady Crystallia. She sees her job as his personal seamstress as an opportunity to further advance her career, getting away from the drab designing she was forced to do up until now. With Sebastian, she can flex her creativity and create works of art rather than just clothes. Her story becomes one of mass-production versus individual creativity. She too is trying to break out of societal constraints through the use of her unique fashion designs.They’re an expression of herself. If there was something I would have loved to have seen more of though, it would be more of an interplay of her men’s and women’s fashion designs. I think there’s only on instance where we get to see Sebastian wearing one her men’s designs while the rest are dresses. I think it would be an interesting expanded exploration of her creativity as well as an expansion on the themes of duality.

The Prince and the Dressmaker is a fantastic story about a young prince who loves dresses and a young seamstress who accepts him for who he is. It’s exploration of gender expression, creativity, and friendship is charming and would be a great read for all ages. I won’t spoil the ending for you, but I have to say that it had me laughing out loud, and I highly encourage you to pick up a copy for yourself to find out what happens. If you’ve read it already, let me know in the comments what you thought.

2 thoughts on “The Prince and the Dressmaker Graphic Novel Review”