I’m not sure what I expected going into Hyouka. I knew it was a mystery series and I had seen the occasional clip here and there, but it definitely wasn’t the kind of mystery I was used to. I grew up on old black and white murder mysteries from the 40s and 50s. One of The Thin Man movies was sure to pop up on our TV at some point every week. It was and still is, in some ways, a staple in my household to sit down every once and a while and watch those old shows. It’s something I’ve grown to love over time, a love passed from my dad to me. But going into Hyouka with this background made a bit confused as to how exactly this series was considered a mystery. It isn’t like any mystery show I had experienced, after all there’s no murder, no real crime to solve. I think that’s the appeal though. Hyouka isn’t just a mystery. It’s a slice of life show, a school life show, and a romance. It follows students being students, solving the kind of mysteries that matter to them in the moment. I have to say, it’s a really interesting show, and one that may make it onto my list of ones I come back to again and again.

The plot of Hyouka follows high school student Hotaro Oreki, someone who hates expending energy on anything, who is forced by his older sister into joining the Classic Lit Club to keep it from going defunct. He is joined by Chitanda Eru, Satoshi Fukube, and Mayaka Ibara. Together they try and solve various mysteries around school, mostly at Eru’s request. The series is based off of a 2001 mystery novel written by Honobu Yonezawa, book one out of six, the other five books being published between 2002 and 2016. A manga adaptation was created in 2012 by Taskohna, with the 22-episode anime by Kyoto Animation following soon after.

One of the most recognizable things about the show is the animation. Right away we get two great openings. In the first opening we get the song “Yasashisa no Riyu” by Choucho played over some great directing and animation from KyoAni. There’s this great look and mood to the opening created through the use of ripple effects and the overlay of characters over scenes and in certain places like the underside of Hotaro’s umbrella. The ripples add color to Hotaro’s gray world, mirroring the themes of show as he begins to open up to friends and find enjoyment in new activities. We also see the ripples forming around the members of the Classic Lit Club, lending to the belief they they are the cause for the infusion of color and interest in his world. 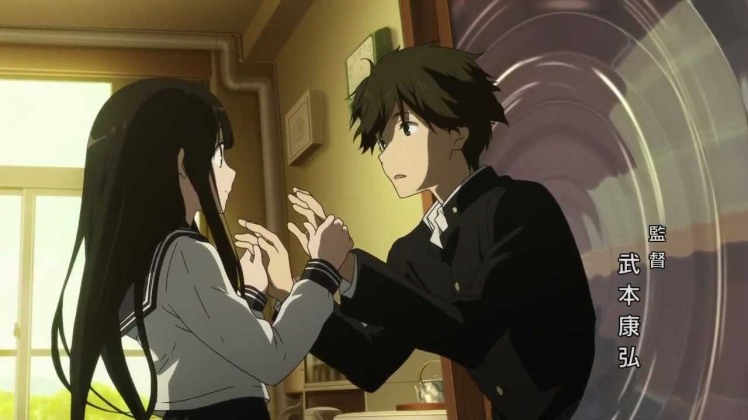 The thematic symbolism jumps up a notch in the second opening, arguably the best out of the two. This time we see a reflection motif being used along with some water symbolism as Hotaro is caught up in a dream while dozing in the club room. The opening paints him as an observer, always in the background at his school. But slowly, and with the help of Chitanda, we see him get drawn out from that role and into the various mysteries that she gets them involved in. It paints a great picture of the show as whole, giving us a look at the characters and allowing KyoAni to show off more of their awesome animation skills. Mother’s Basement has a great in-depth look at the second opening, and I encourage you to check it out for yourself, as I really do think it’s an awesome opening in its own right.

I really can’t say enough about how much I love KyoAni’s animation and directing in this series. It really is a step above what I expected from a 22-episode mystery series. I believe I posted this article at one point in one of my “Last Week in Geekdom’s”, but the Sakuga Blog has a great look at the various daydreaming sequences throughout the anime and how they relate to the building of its characters. Those sequences were honestly some of my favorite standout moments of the series and I agree with the article above that they really do add to the characterization of the cast in how those dreams are displayed. It also lets KyoAni show off the creativeness of their staff as the animation staff on the project have said they were given free reign to design the dreams however they wanted.

The first dream we get was created by the director and really gives us a great start to the series that gives us a good baseline for the what the relationship between Hotaro and Chitanda is. In it we see him become trapped in her eyes as her hair begins to wrap around him, spreading out all over the room like a web as flowers begin to bloom around them. It signifies Hotaro becoming drawn into Chitanda’s interest and curiosity, subsequently forming feelings for her in the process. At the end of the first arc we also get some of the best animation as Chitanda learns the truth about what happened to her uncle. The contrast between the different animation styles really jumpstarts the visual interest of the whole series, drawing the viewer in and keeping them there.

The mysteries play an important part of the series, but it’s the character’s underlying relationships that really fuel the action and plot of the story. The only reason Hotaro joins the Classic Lit Club is because his sister forces him and he has nothing better to do, but he doesn’t start participating in anything until Chitanda shows up. It’s only through her urging and appreciation of his skills at deduction that he begins solving mysteries. Without Chitanda, he might have continued to stay in his own gray little world. We see his growing feelings for her carry throughout the series, providing an emotional backdrop to his actions and a catalyst for his own growth in character over time. Towards the end of the series, we see his confidence in his skills rise to the point where he doesn’t object to solving mysteries and actually seems to take an enjoyment in it. It’s his feelings for Chitanda that pushes him into new situations, often answering her call for help that leads him to another mystery that needs solving.

But there’s another important relationship we see develop throughout the series and that’s the growing love between Satoshi and Mayaka. It’s something we see play out across the whole series, culminating in the Valentine’s Day episode. It’s an interesting relationship that adds a lot to both characters, especially Satoshi. Through his rationalization of their relationship troubles, we get a picture of his world philosophy, one where he avoids the things that could potentially spark his obsessions. By not letting himself become obsessed over anything, he feels happier, but it begins to affect his feelings about his relationship with Mayaka. In the meantime, Mayaka works her ass off to get his approval. It creates a nice background relationship to ponder as the series goes on.

As one last point made in the series, I really liked its comments about fandom and how fans express their love of a series. In the episodes with the cosplay cafe, we see Mayaka getting made fun of and snubbed in Manga Club as she can’t afford fancy cosplay costumes and tends to like obscure manga and anime rather than some of the more popular series. It becomes an interesting conversation about what it means to be a fan and how fans display their love of the media they consume. It’s a conversation that comes up in a lot of fandom circles, where we see people being judged for cosplays that may not be as fancy as others or fans arguing over what we should like and why. Mayaka becomes a voice for the manga fandom in her arguments and perseverance against her classmates. However, it not only creates an interesting conversation, but it gives important characterization for her, something that quickly endeared her character to me.

I really fell in love with this series, finding myself binging multiple episodes and feeling the urge to watch more until it was finished. With KyoAni’s help, Hyouka became both a visually interesting series and a show with a story that draws you in much like Chitanda does to Hotaro. I wish I had the time to go into more of the mystery elements of the series, but I figured I’d focus on relationships and characterization considering the nature of the this blog. Maybe further rewatches will yield more things for me to talk about, but until then, let me know in the comments what your favorite mystery was. Mine was the Jumoji thief. Did you have a favorite daydream?

Follow me on Facebook, Twitter, and WordPress for all Bloom Reviews content updates and news! As a reminder, I’m doing one review a week plus news for now until things settle down a bit outside of blogging.