Image Comics has always been one of the publisher’s I find myself gravitating towards the most in terms of comics and stories that capture my interest. They always have a wide variety of genres and stories to choose from and have the market share and money to fund experimental projects. Like Twisted Romance. Last January, Image Comics took a chance on a short, 4-issue romance anthology, marketing it as a special weekly event that would last the month of February. It features both prose and comic writings with one story written by Alex de Campi and a new artist every issue. Three self-contained stories wrapped up in its 44 pages, longer than a standard single issue and definitely worth the $3.99 price tag.

Because I’m slow on the uptake, you can actually find all four issues in one combined volume now, but I figured I’d take it one issue at a time and just have a shorter than normal review for each. Twisted Romance started as an experiment in romance comics, one of the first after many years of publishers leaving the genre by the wayside in favor of superheros and the ever-popular zombies and post-apocalyptic stories. But in the past, Image has been one of the big publishers to take a look at the genre and see some real potential, with series like Saga and Sex Criminals winning a lot of attention from fans and even multiple awards.

I love seeing companies take a chance on romance, because it means they see the market for comics expanding into new territories and see the potential of adding a diverse variety of genres that could bring in new fans. Romance comics used to be a huge market in the 40s in the US, bringing in a lot of female readers, but as the comic market was shaken by a flood of comics into a market that couldn’t support it, the Comics Code, and the ultimate crash in the 50s an 60s, romance comics were kind of passed over when the market finally started to recover through the printing of superheros again. This left a lot of female readers with nowhere to go but magazines and romance novels. Not to say that there were no female readers, but you’d see most of the ones that still wanted to be involved in comics transfer to the now-vibrant underground scene.

So now there’s this thinking that romance doesn’t sell, when obviously that’s not the case. Fans just went where the genre went: mainly prose. To see Image take a chance on romance again and in a difficult medium like anthologies and magazines, gives me hope for the genre as a whole. I can see the potential of Twisted Romance in its pages, its diverse stories, and the experimental styles of many of the artists.

Issue #1 features the Katie Skelly (My Pretty Vampire) partnered with the writing of Alex de Campi, the prose writing of Magen Cubed (Crashers), and the art of Sarah Horrocks (Goro). It makes for a good variety even if this issue seems to have a pretty overarching theme of horror going on. The first story, “Old Flames”, is about a man who runs a business tearing people apart instead of bringing them together. He also happens to be an incubus. The second, “Leather and Lace”, is about a vampire and human pair of monster hunters and the romance that develops while they’re out hunting wendigos. The last, “Red Medusa”, may be the strangest and hardest to describe, but I got the impression it was about a romance between two people in Hell. 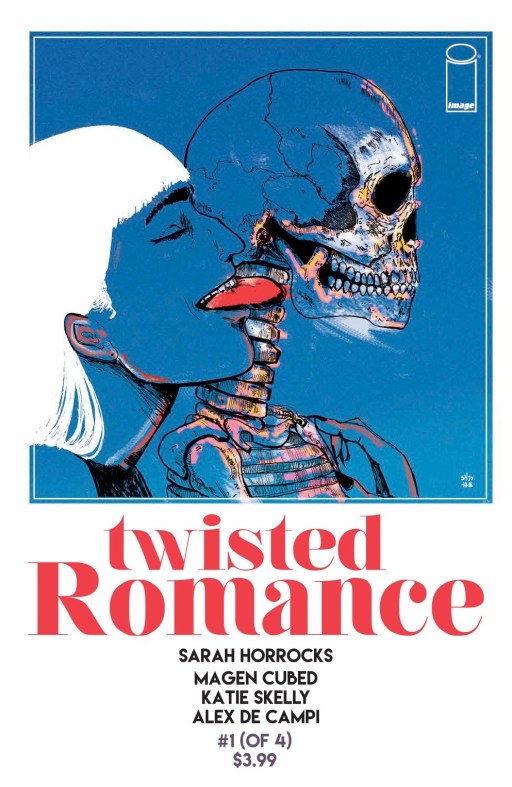 I think my favorite out of them was actually the prose story. “Leather and Lace” was all of eight pages long but it managed to create interesting characters and a scenario that held me until the end. The added supernatural element was a nice touch, creating mystery and danger and a love between two quintessential “bad boys” who also had enough personality injected into their characters to make them not feel flat. The vampire is moody, mostly because he finds himself in love with his partner, but also not like a tv-horror vampire as he snuggles with his pet chihuahua and drinks blood out of a bendy-straw. Our monster hunter totes around a sawed-off shotgun and isn’t afraid to go chasing off after monsters, but he also likes spending time in karaoke bars singing Stevie Nicks classics. It was enough to get my paranormal romance-loving heart wanting more.

The main story, “Old Flames”, was interesting as well, with Katie Skelly’s art reminding me a bit of Exquisite Corpse in its simplicity and somewhat messy line-work. Her artwork isn’t polished, and while that makes some of the later scenes in the comic a little underwhelming, doesn’t necessarily detract from the feel of the comic as a whole. Alex de Campi’s writing was enjoyable as well, but still I still left the story feeling like I needed more. More backstory, more context of his company as a whole, more something that would give me a better picture of the world. I know it’s not necessarily possible in this short of space, but the story itself definitely has the potential to be expanded on even into a larger series.

This series is called Twisted Romance for a variety of reasons, and in this first issue you can see just how wrong love can go and even how right. It offers tales of love from a variety of perspectives, tinted with monsters and the paranormal to give it that darker edge. In “Old Flames” we see how love and sex are exploited for personal gain as two incubi/succubi battle over one man and their ideals. In the character of the incubi, we see the fluid nature of attraction as gender never seems to be an issue to him in terms of who he seduces along the way. “Leather and Lace” gives us all the danger and mystery of a Supernatural episode with some great gay love at its center. And while I didn’t quite enjoy the last comic, I can appreciate it for Sarah Horrocks colorful and stylized art that wound up being very visually appealing.

I can’t wait to see what’s in store for future issues and whether or not this series has more of a future at Image. The combined volume was published just last week on the 5th, so maybe there’s some hope in the future. I’ll be keeping my eye out anyways. Let me know in the comments if there are any other anthologies I should be putting on my radar. More manga reviews start next week, so see you then!