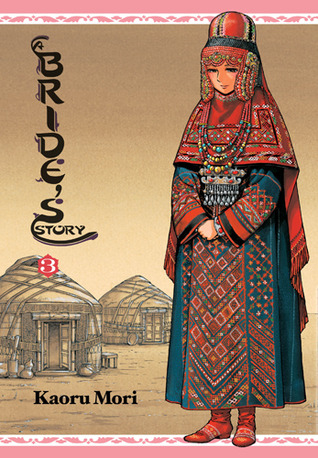 No matter how much I grumble about the price of a volume of this manga (17 USD), I will always enjoy picking it up and reading on with the story. The price really is worth it. For a hardcover edition, larger pages, and great quality art, I really shouldn’t be grumbling too much. Not to mention that the series is finally getting an ebook edition that just might be cheaper, so if you like to read manga digitally more than in print, this is your chance to pick up one of my top 10 favorite mangas. Whenever I get around to reviewing my top 5 lists that I did a year or two ago, I might just add this one up there. You can feel the just vast amount of work and dedication Kaoru Mori put into this series through her intricately detailed art and in-depth historical knowledge of the setting and cultures she’s depicting. It creates this great cross-over of enjoyment for me between my history buff side and artistic side, providing a great well-rounded series I can really sink my teeth into.

The plot of each volume of A Bride’s Story follows one or two different potential brides through their lives and troubles as they try to find a marriage partner. For this volume we have Talas, a five-time widow who now lives alone with her mother on the land left to her by her husband’s family. The potential groom in this case is Mr. Smith as he continues on his journey back to England. At the start of the volume, we see him arrive at the meeting point where he is supposed to pick up his guide to Ankara, but due to some unforeseen circumstances (like his bags being stolen and his guide nowhere in sight), Mr. Smith is invited to stay with Talas and her mother until it is time for him to leave. 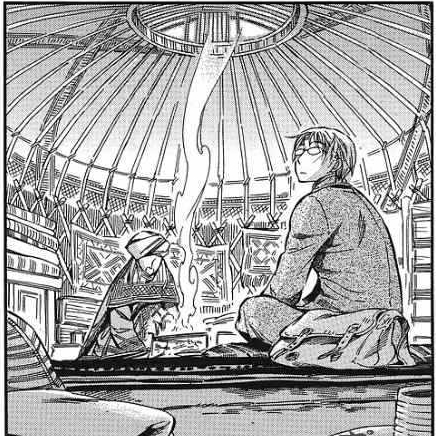 I read a post on Twitter a while ago talking about all the strange things translators have had to learn in the process of doing their jobs. Arcane arts, strange historical facts, and other incidental bits of knowledge behind words and phrases that you wouldn’t really think about otherwise. Reading this manga brought that discussion back for me, not just because I wondered what the translator for this one had to learn in the process of doing their job, but also how much research and word went into even the smallest bits of art. Every detail is done in accordance with Mori’s research. Take the shots of Talas’ houses. You can tell she researched just how these were built so that no structural detail would be missed. I wound up staring at those panels probably longer than necessary, just following the way the wood supports curved and connected. 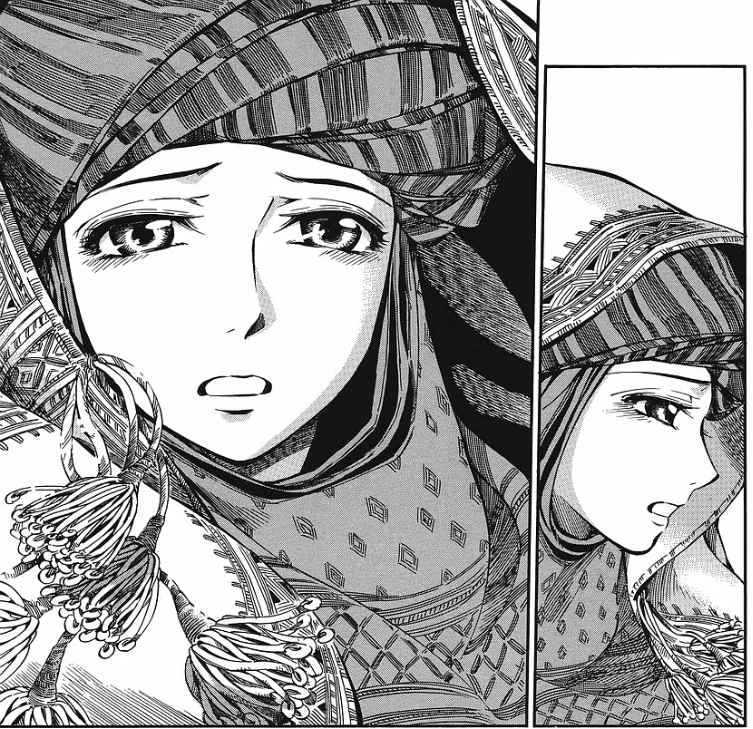 Her focus on clothes and fabrics are another highlight of the overall style of the manga as well. It really makes you feel like you’re being drawn into the culture and the story as you look at all of these panels with these highly detailed fabrics, folded just right, that would be identical, or mostly identical, to what people of that era would be wearing. I especially love the way she draws all of the head coverings and wedding attire. Talas’ character designs with and without her head coverings are both equally striking. 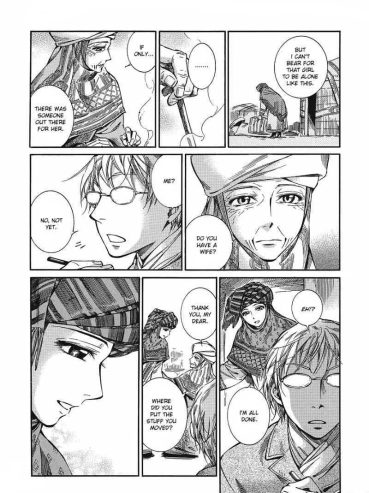 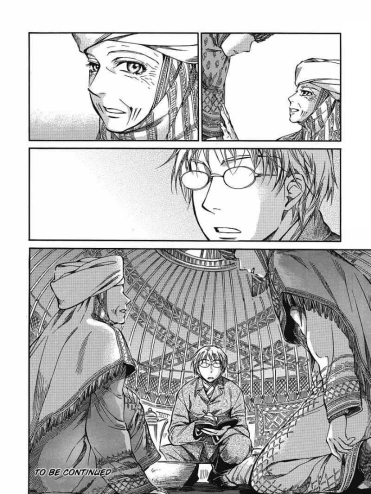 Every detail Mori puts into her art is another level of world building and support for her overall story. I think I said last time I’d like to see a story around Mr. Smith and in this volume we have it. His story of love and regret with the potential bride Talas was both heartwarming and heartbreaking. It was a short relationship, but I think we really get to see a lot of character growth from Mr. Smith in how he reacts and the different choices he winds up making. Talas’ story is a tragic one I’m afraid. Her first five husbands all died either of accidents or illness and her father-in-law passed from a broken heart, leaving her alone with her mother-in-law to take care of chores and the last of their herd of sheep. To make matters worse, her Uncle is trying to force her into an arranged marriage with his son to be his second wife, a position that will leave her nothing more than a slave. With the appearance of Mr. Smith, Talas’ mother sees a way out for her and tries to convince Mr. Smith to marry her. But marrying him would mean leaving her mother behind and alone. 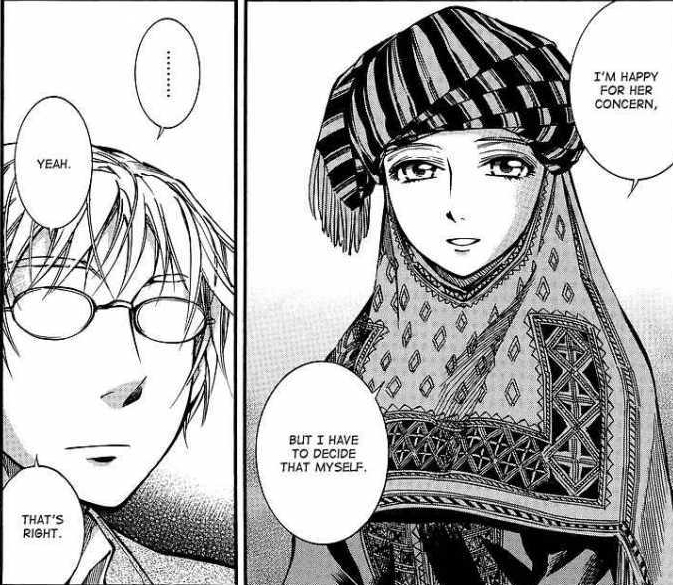 It becomes a story of clashing cultures and ideals as Mr. Smith’s cultural background of England and their thoughts on marriage and choice conflicts with Talas’ culture of letting the family patriarch choose a daughter’s husband. Talas seems to be caught in the middle of that, wanting to choose her own path and future but that is all thrown away once her mother marries her Uncle. Then, she has no choice. She must marry whoever he chooses, and he will not choose Mr. Smith. The culture of arranged marriage was never really given a negative edge before this story. Most of the fathers, like Pariya’s, were understanding of the needs and wants of their daughters and cared about finding them a good match. With Talas’ story we see how that can all go wrong when a father doesn’t actually care about his daughter. 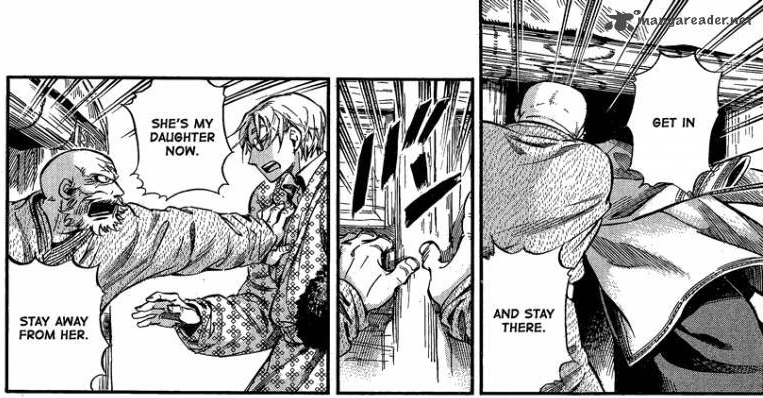 To hear every male character say, “you can’t go against her father”, “she is a woman”, is heartbreaking in away combined with Talas’ last expression as she’s forced into the house. But that is another part of the realism of this story, showing the culture as it actually was, a historical perspective. In the end, we see another side of Mr. Smith. He’s still his unyeildingly curious self, but now we see the serious part of his nature as he tries to reconcile this culture that is different from his own with his cultural ideals and morals. In the last moment of the manga, the most striking couple panels give us a heartbreaking look at Mr.Smith’s headspace as he tosses the gold watch intended as a betrothal gift off into the desert to never be seen again. 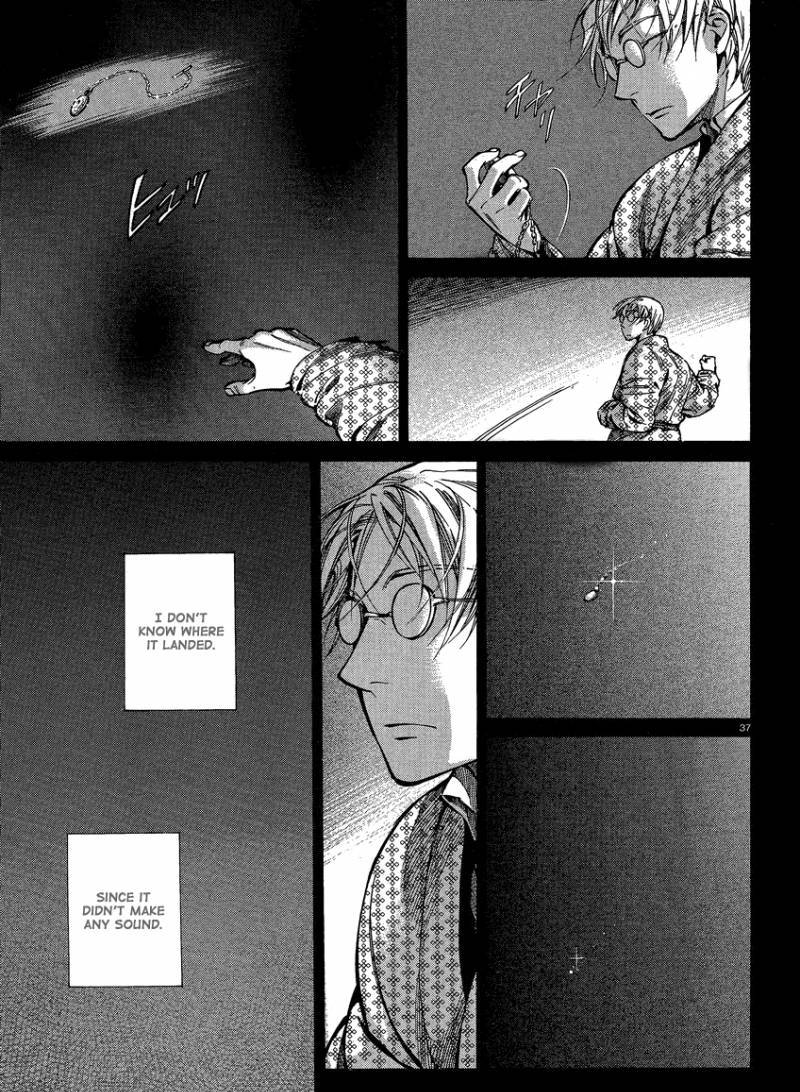 I don’t think we’ll ever be seeing more from Talas, which is honestly a shame because I love her character. From the looks of it we’ll be seeing more of Mr. Smith and more of Pariya. I can’t complain about either. Mr. Smith is quickly becoming one of my favorite characters next to Amir, and Pariya is really growing on me. It interesting to think about what we might see next on Mr. Smith’s travels in terms of both political and cultural aspects. We have the backstory that the Russians are slowly advancing on the lands of different clans, with many people becoming worried about Russian spies. Will Mr.Smith run into more trouble with the Russians and what other potential relationships will we see in future volumes? Hopefully a happier one this time.