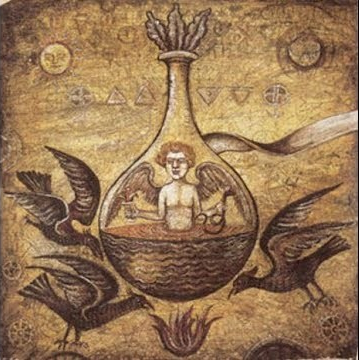 The creation of artificial human life has long been connected to alchemy and can be traced back to the first recorded recipe for creating a Homunculus in an Arabic work titled The Book of the Cow. So what does an aspiring alchemist need in order to create artificial life? Well, according to this book you’ll need: magician semen, a sunstone, a cow or ewe, sulfur, a magnet, green tutia, and a large glass or lead vessel. Robert Lamb from How Stuff Works goes on to lay out the step-by-step instructions, and you can read those for yourself, but it says that after the cow or ewe is inseminated and fed exclusively on the blood of another animal it will give birth to some “unknown substance”. After being transferred to the large vessel with the before mentioned chemicals, it will start to form human skin and develop slowly into a small human.

Now obviously we can say that these types of writing could be construed as metaphor, as philosophers and scientists playing with ideas of conception and the creation of human life before the age of modern science when we could accurately know what happened in a woman’s womb. Alchemy was in and of itself a precursor to science in an age where Christianity still ruled people’s perception of the world. In fact, this article from Mary Campbell outlines how in the beginning of our understanding of conception, there were many who thought that the process was mainly “monogenetic” as she calls it, meaning they thought the sperm held all of the building blocks for human life, not just half. To go further, many thought that a tiny human (or Homunculus) sat fully-formed in the sperm cell only to grow into life-sized infants in the womb.

It’s crazy to think about all the weird things humans thought about conception and the inner workings of the human body now that we know so much. It’s also interesting to think about these ideas in an era where we are again talking about the creation of artificial life and artificial intelligence. Robotics and programming has taken such a dramatic turn and seem to be making the metallic equivalent of Homunculi today. But in a strange way, isn’t it a natural course of humanity, to wonder about and try and control the creation of life in all its forms. Back in the days of alchemy, we also had the production of Golems in Jewish mythology and then the stories surrounding Frankenstein later on in the early 19th century that again reignited that wonder. 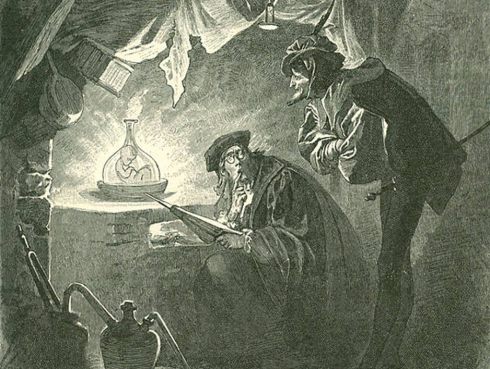 In this article on Homunculi, Gary Lachman theorizes that, “The true goal of the alchemists, the real aim of all the preparation and cumbersome apparatus, was to unite their earthly, mortal soul with that of the Creator, to participate in the divine, to reawaken their spiritual consciousness, and to grasp the secret forces at work behind the natural world.” He goes on to say that the process of making the Homuculus is really just a metaphor for the transformation of the alchemist from a normal human into someone that I guess you would call enlightened by learning alchemy. Thus the Homunculus becomes a representation of the newly reborn alchemist. All of this is very philosophical in nature as alchemy is still steeped in a culture and theology of Christianity. For me, that makes it a bit difficult to talk about without going off on long tangents about the stories in the bible and the creation of Adam. So we’ll just move onto the anime and manga portion.

By far, the most recognizable representation of Homunculi in anime and manga is Fullmetal Alchemist. Eight Homunculi make up the main villains of the series, with Father at the head and seven others named after the seven deadly sins working for him (depending on which anime series you watch). There is some contradiction between the 2003 anime and the more recent 2009 Brotherhood anime, but I’ll try and cover a bit of both. In the Brotherhood anime which most closely follows the manga, the seven deadly sins Homunuli were created by the original Homunculus known as Father in an effort to rid himself of his vices and become more powerful. He took from himself parts of the philosophers stone that gave him his power and inserted them into human hosts or empty shells he created out of the required materials. These Homunculi took on the nature of each of these vices becoming the seven deadly sins. In the 2003 version, Homunculi were created through failed human transmutations, with the resulting creations having the souls of the deceased human that was trying to be resurrected but lacking something that made them a full human.

Both versions lack the kind of methodical, step-by-step process we see above from the original alchemical texts, but it does still capture the core thoughts and philosophy of alchemy and the creation of Homunculi. It centers in on the creation of life outside of yet connected to a more holy power. The creation of these creatures centers around the philosopher’s stone which is in turn created from the amalgam of energy gotten from human souls, thus admitting to a connection to a higher power and the existence of souls. In some sense, you can relate them to golems who are artificial life created out of clay. A couple of the Homunculi in this series like Gluttony were not created from a preexisting human, but had bodies created for them before the philosopher’s stone was inserted into them. They also tend to turn back into dust when they die or the power in their stones is depleted. Their origin may not involve the same amount animal insemination, but it does involve a fair amount of blood and death, bypassing the use of semen for their soul component, and going straight to the soul itself.

The other anime and manga I thought of while coming up with this post was XXXHolic with the characters of Maru and Moro. These two twin girls are the helpers at Yuko’s shop, but they also wind up being two soulless “spirits” attached to the shop for eternity. And because they do not possess their own souls, they can never leave the shop to go to festivals or anywhere around town. Their purpose is to run the wards and provide power for the shop’s dimensional space, keeping it separate from the rest of the world. They are artificial life created by Yuko to serve a purpose, and in essence we could relate them to both golems and Homunculi. While Homunculi do, I believe, have souls, they are still created by alchemists to serve a purpose and are considered incomplete humans because of the way they are created. I almost wish we knew just how Yuko created them so I could go more in depth into the connections here.

Another Homunculus I can point to in anime and manga would be Ennis from Baccano! However, I don’t really have the time to go into depth on her character and since it’s been a long time since I’ve seen the series, I don’t know if I could talk confidently here. From the backstory I’ve been reading, she was created from the genetic material of another woman and grown in a tank in a lab by an alchemist. She is originally a mindless soldier until she gains emotions and empathy after devouring another alchemist. It’s an interesting premise and you can definitely see the connections to older alchemical practices here. I’ll have to go back and watch the series more to really look into her character more.

Anyways, let me know what you thought in the comments below and if you can think of any other Homunculi-like characters from other shows or comics.