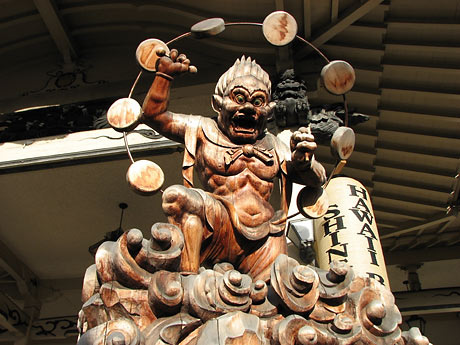 Never clip your nails at night. Make sure to hide your thumbs when a funeral procession goes by. Don’t whistle at night or you’ll invite a snake into your home. These are just a few of many superstitions that can be found in Japanese culture used to scare children into good behavior. Another common one you may hear is “always cover your belly button when thunder is rumbling.” It’s very obviously a cautionary tale to prevent children from getting sick when the temperature drops during a storm, but what are the mythological and cultural origins of this phrase? Why thunder and why belly buttons in particular? 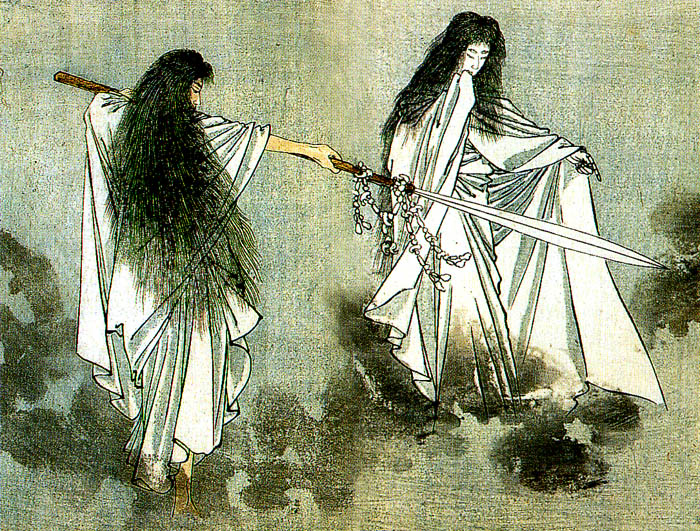 The story goes all the way back to the creation myths surrounding the islands of Japan. The story goes that in the beginning there were seven generations of gods in a formless and chaotic space. In the seventh generation were the brother and sister of Izanagi and Izanami who were tasked with bringing order to the chaos around them. To do this, Izanami and Izanagi decided to create a home for themselves and start a family. Izanami soon gave birth to the islands of Japan and kami that would inhabit them, but it was with the birth of their last child, the kami of fire, that Izanami was burned to death.

But Izanagi was determined to bring her back from the world of the dead and so journeyed to see her. When he managed to reach her, Izanami told him she would follow him out but he must not look back at her until they had left the underworld. Of course, as these stories always go, Izanagi gave into his curiosity and looks back at Izanami. It was revealed to him that she was no longer his beautiful wife but a rotting corpse with many recently born thunder kami attached to her body. Furious with Izanagi, for he has now trapped her in the underworld with no hope of escape, she sends the thunder kami and other spirits after him. He manages to escape and block the entrance with a large boulder, but it is widely believed that this is the origin of the thunder kami, Raijin who is known to pound away at his drums and devour the belly buttons (or whole abdomens) of children.

Often depicted as almost Oni-like in appearance (you can read more about Oni in my post last week) with read skin, clawed hands like an eagle, and a drum with a swirl-like tomoe symbol from which he produces the sound of thunder by beating on it. It could be a single drum or a ring of linked drums, but the concept is always the same. He is also commonly depicted with the wind kami Fujin who battle for control of the skies, producing terrible storms in their wake. However, he’s not all bad, as thunder and lightning is also associated with good luck for rice crops. Anywhere lightning struck it was thought that rice would grow well. But thunder cannot exist without lightning, and that’s where the Raiju comes in.

Raiju are the sort of pets of the god Raijin. They are the incarnation of lightning, often seen as taking the shape of wolves, snakes, or weasels and are also commonly thought of as shapeshifters. This is where the superstitions about belly buttons come from. While it is said that Raijin likes to devour the belly buttons or abdomens of children who dare to show their bare stomachs to him during a storm, most of the tales around belly buttons and thunderstorms center around the Raiju instead. It is said that during storms, the Raiju are released from the control of Raijin and enjoy snuggling up in the navel of unsuspecting people who leave them uncovered. In order to wake up the Raiju, Raijin will hurl lightning bolts at the navels of these people, electrocuting them in the process. It’s both cute and kind of scary to picture a little lightning dog all snuggled up in a belly button only to be awoken by a jolt of lightning that could possibly kill its host. 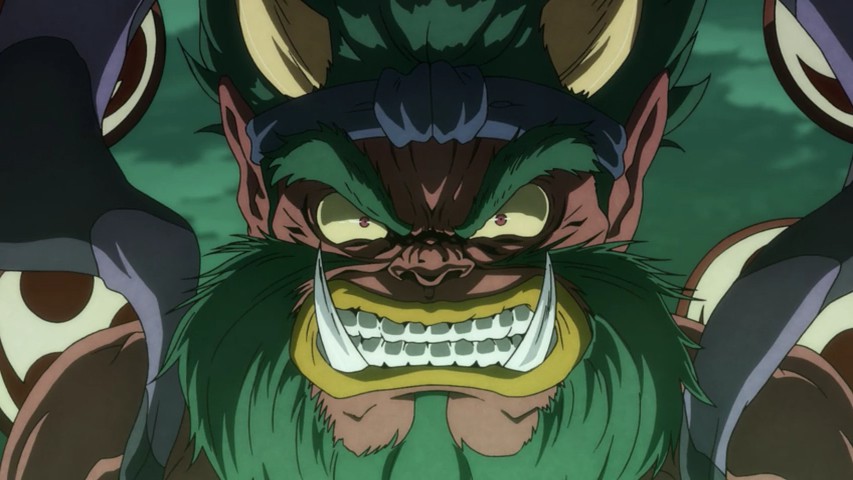 In the world of anime and manga, Raijin makes an appearance in the famous youkai oriented show and manga GeGeGe no Kitaro under the name Kaminari in the fifth episode. Kaminari literally means thunder and his character is very obviously based off the legends surrounding Raijin. We see this most prominently in his appearance. He is depicted as a red or dark-skinned Oni-like character with his giant horns and teeth. With him he carries a bunch of drums linked together in a circle that he can play and summon lightning and thunder with. Kitaro manages to defeat him by absorbing his electricity and firing it back at him. To do this and to avoid getting fried himself, Kitaro uses some sort of copper circle that he places over his belly button, relating back to the legends surrounding Raijin targeting belly buttons with his lightening.

Another place we see references to these myths are in Cardcaptor Sakura with the Thunder card. It is a very obvious reference to the Raiju and their appearance as a wolf wrapped in lightning. It is also shown as a kind of shape shifter, taking on the form of ball lightning or a giant lion like head. However, this is where the association stops. I even watched back through the episode to see if Touya makes any quips about Sakura sleeping with her stomach uncovered, and didn’t see a reference to that part of the legend either. But I think it’s clear enough where CLAMP got their inspiration for that card. 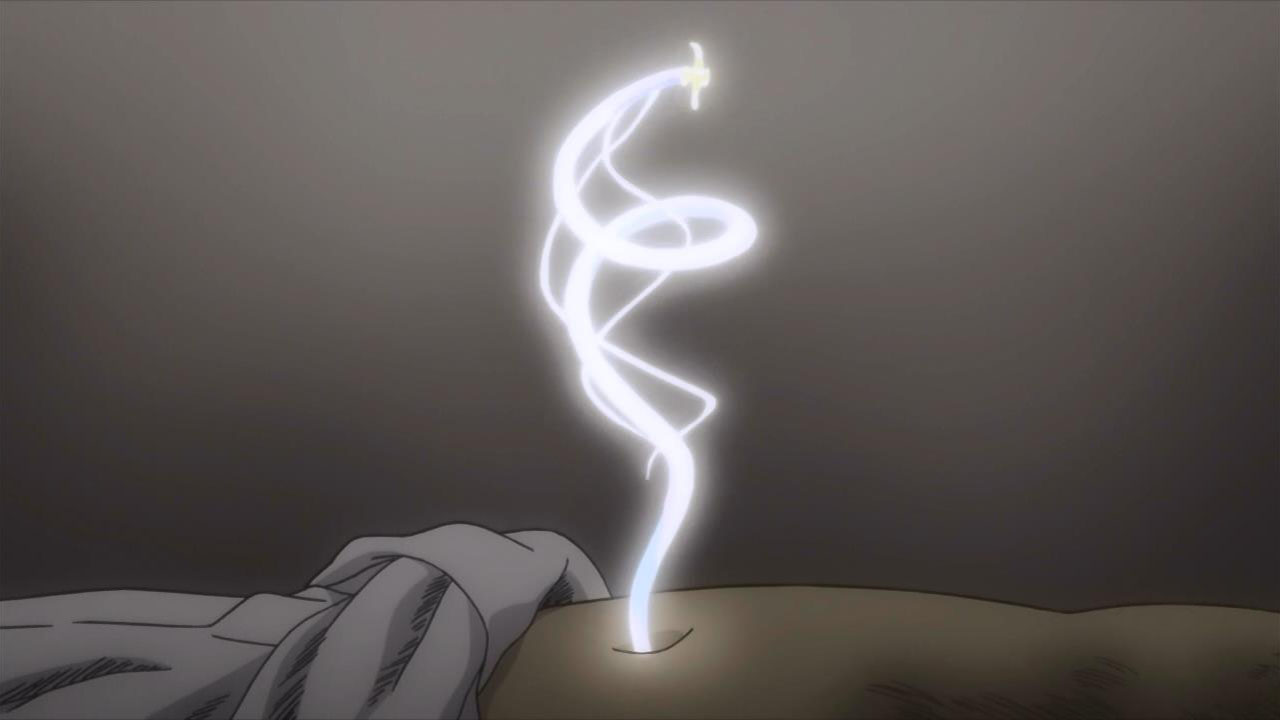 The last one I want to talk about is in the series Mushishi, specifically episode 20 “Lightning’s End” where in Ginko goes to investigate a particular tree that has been struck multiple times by lightning. In the process, he meets a child who attracts lightning to himself through the influence of a mushi. Can you guess where that mushi likes to hide? If you guessed belly button, you’re right. The mangaka, Yuki Unushibara, was known to draw from legends and folk beliefs for many of her stories, and it seems pretty obvious which myth she borrowed from for this story. The problem of the lightning attracting mushi becomes a framework for a much deeper discussion on parental and maternal love and whether or not a mother is obligated to love her child. Overall a very interesting episode.

If you can think of any other references to thunder gods and/or beasts, let me know in the comments below. I know there are so many more, but these were the top three I thought of while writing this up.