You’re walking down a dark street at night. Mist is starting to cover the ground making the road ahead of you hard to see. Suddenly you see the shadow of a woman step out of the mist and walk towards you. She looks like a fairly normal Japanese woman and is wearing a surgical mask to cover her face. That in and of itself isn’t weird as many people in Japan wear masks when they are sick or for various other reasons. The woman continues to walk towards you, and when she is close enough for you to see her face clearly, she asks, “Am I beautiful?” Not wanting to be rude, you answer “Yes”. The woman takes hold of her mask, pulling it down to reveal a mouth that has been slit open ear-to-ear, and asks, “Even now?” You have just met the Kuchisake-onna, how do you answer? Be careful, if you answer wrong, you could end up looking like her.

What happens when a ghost story or urban legend gets too real and leaks into real life, spreading real, tangible fear? The legend of the Kuchisake-onna is a great place to start looking at this phenomena. Her story is an old one that has lasted for centuries, from the Heian period to present day. In between, back in the 70s, she had a surge in the public consciousness of Japan, leading to news reports, increased police presence on the streets, and an increase in fear for children walking home from school. The extent to which this urban legend affected the lives of real people was something I was not aware of, and it was only until Astonishing Legends did a podcast about it that I thought this would be a great topic for the last Mythology Special post of the year.

The story begins, some say, in the Heian period with the wife of a famous samurai. By all accounts, the woman was very vain and often flirted and looked for compliments from other men, possibly going so far as to cheat on him. When the husband found out, he slit her mouth from ear to ear, making sure no one would ever find her pretty. It is said that the woman died shortly after and became the vengeful spirit, Kuchisake-onna. The legend persisted into the modern age, where it evolved in the 70s to reflect the growing public interest and distrust in plastic surgery. This other origin story says that the Kuchisake-onna was the victim of a plastic surgery gone wrong that left her mouth looking like the Joker. Now she goes around attacking school children in order to release this pent up rage over her disfigurement.

In the 70s, the story of the Kuchisake-onna came to a head and got new, terrifying life breathed into it. In the Spring and Summer of 1979, rumors and sightings of the Kuchisake-onna started to spread especially around elementary schools. In Kanagawa prefecture, extra police cars were sent out to patrol the streets. In Hokkaido, special groups were formed to walk children home from school safely. School communication logs to parents contained warnings and information about the problems she was stirring up, and children started bringing the Kuchisake-onna’s favorite candy with them to school as a means of defense. In June of 1979, a 25 year old woman in Himeji city dressed up as the Kuchisake-onna as a joke and walked around carrying a knife before she was finally arrested. But by August, stories of her had calmed down, and it wasn’t until the 90s that her name started to be mentioned again because of the prevalence of plastic surgery. 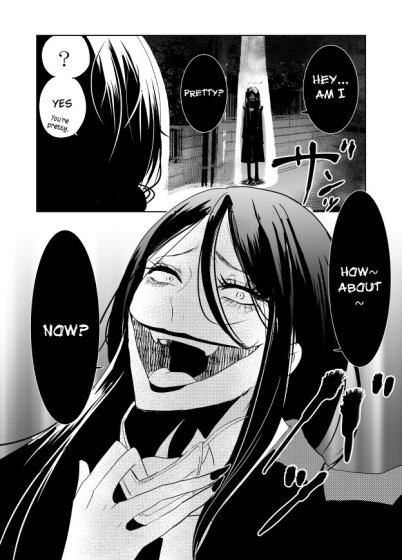 The Kuchisake-onna has been on the mind of the Japanese people for decades and became one of the most popular urban legends. Haunted houses opened up where people in Kuchisake-onna costumes chased young children through a building. Prank services were created where you could hire an actor to dress up as the Kuchisake-onna and scare the crap out of a friend. She eventually got multiple movies about her and was included in a lot of different TV shows and other media. From the list linked above, it looks like she has two manga just about her: Kuchi-sake Onna and Kuchisake Onna Densetsu. I haven’t had a chance to look at either, but it is always pretty interesting when an urban legend gets enough traction to get their own dedicated story. Apparently you can also see her in the Mob Psycho 100 manga, so maybe there is a chance she’ll be appearing in future anime episodes.

It is so interesting to me to see how urban legends can gain such an influence on a community that they legitimately begin to take steps to defend themselves. More police patrols, children carrying the Kuchisake-onna’s favorite candy in self-defense whenever they go to school, and communities coming together to make sure children got to school safely. It makes me think of similar things like the Slenderman scare over here in the US that lead to the stabbing death of at least one girl off the top of my head. It’s a case in what happens when people take urban legends a little too seriously.

Happy Halloween! Let me know in the comments if you know of any other appearances of the Kuchisake-onna in anime or other media. Also let me know if there are any urban legends in your community that maybe went a little too far.

2 thoughts on “October Mythology Special: Kuchisake-Onna, or What Happens When Ghost Stories Get Too Real”