It’s been awhile since I’ve done something other than an anime or manga review on this blog, so I think tonight I’d like to return to the world of comics, more specifically indie comics and graphic novels. Tonights review is a independent comic by Keezy Young called Taproot. I picked up this comic last October during a comic convention but never really got the chance to do more than read through it once. It’s such an adorable queer, paranormal romance that I couldn’t help getting drawn back to it this week and felt the urge to share it all with you.  Young combines her love of color, plants, queer relationships, and all things slightly creepy into a wholesome and lighthearted romance. Published by Lion Forge’s imprint Roar in 2017, the comic is apparently based off a webcomic (that I will need to check out later).

“A story about a gardner and a ghost” is how the subtitle for this comic reads, pointing to the basic premise of the story. On the back cover, the description expands: “Blue is having a hard time moving on. He’s in love with his best friend. He’s also dead. Luckily, Hamal can see ghosts, leaving Blue free to haunt him to his heart’s content. But something eerie is happening in town, leaving the local afterlife unsettled, and when Blue realizes Hama’s strange ability may be putting him in danger, Blue has to find a way to protect him, even if it means….leaving him.”

This first thing you notice about this comic is just how amazingly thick the pages are. It’s honestly a great feeling as you’re turning the pages, making the whole comic feel more like an art book. Definitely a great choice by Lion Forge in comparison to every other comic that does have fairly thick pages, but they’re the standard glossy pages, not like these. The next thing you notice is the super vibrant colors Young uses throughout. The comic is centered around a gardner who works in a flower shop, and Young uses this setting to her advantage, letting the vibrancy bleed out from the shop and into the surrounding backgrounds and scenery. All of her backgrounds look as though they’re being overrun with greenery as it literally climbs up the walls in some places. With the addition of colorful plants on every page and warm, cloudy backgrounds, the comic just draws you into its comfy warmth while also contrasting heavily with the darker, spooky forest pages. 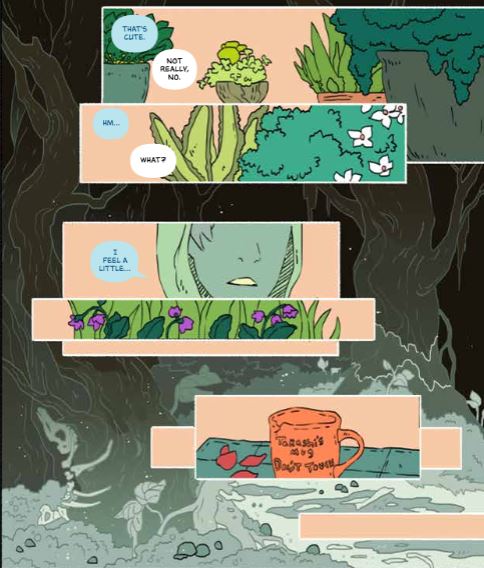 Keezy’s art itself is fairly loose and sketchy with the focus seeming to be more on color and story than on detailed backgrounds and panels. Don’t get me wrong, this is completely okay and I found myself really liking some of the character designs she came up with, especially the reaper. Some parts could use some work though. I did feel like there were some pages were her line work wasn’t as strong as it could be or some backgrounds or panels that could have used more shading or darker values. Flat color is good in some moments, but I did really like the times when Keezy used noticeable highlights or contrasting values. Especially for a comic dealing with nature, these aspects can really help backgrounds and plants really pop. 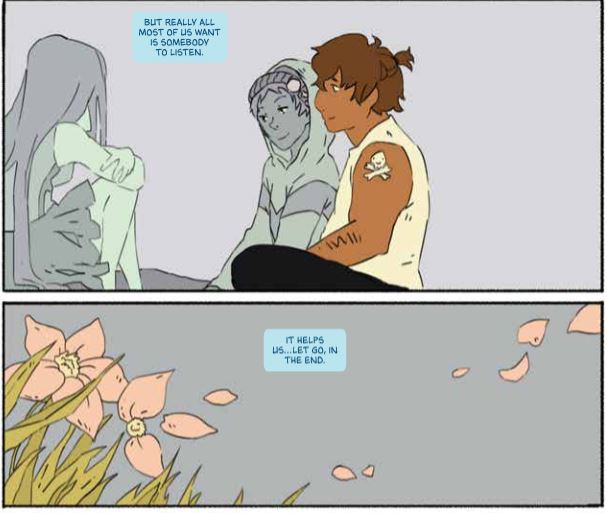 Taproot is a paranormal romance to its core. The main character Hamal winds up falling in love with a ghost that has taken a liking to following him around everywhere. Some necromancy starts happening, reapers get involved. Keezy has created a pretty interesting take on necromancy, giving it a lighter and more heartwarming vibe. She leans the philosophical and thematic elements of this type of magic more towards monitoring the balance of nature, life and death as a matched pair. The fact that Hamal is a gardner becomes both relevant and meaningful in this sense as caring for plants is an act of giving life and encouraging growth. I can almost see Hamal getting into gardening when he was younger because of his ability to see ghosts, as a way to combat that death around him. This is also where this contrast of the spooky forest and the vibrant greenery of the real world come into play as well, serving as a stark contrast, mirroring the dichotomy of life and death. It’s through figuring out this mystery of the spooky forest that Hamal begins to understand this balance and what maintaining that balance as a necromancer actually means.

All of this story of restoring balance and learning how to be a necromancer becomes a backdrop for the main focus of the story: the blossoming romance between Hamal and Blue. It is quite the cute and touching queer romance. The fact that Blue is a ghost creates another layer of complication and drama to their whole relationship, but Keezy thankfully does not take it to the often times tragic end that some of these same types of plot lines do. Their romance thankfully remains lighthearted with a satisfying ending, and I really do think that kind of ending is needed in a queer romance story about the balance between life and death. A tragic ending might have just been a little too much.

The one part of the story that I felt could have used a little more work or that I wanted to see more of was Hamal and Blue’s work as necromancy detectives. There’s an epilogue-type story with them solving a weird mystery using magic and necromancy, but it almost feels semi-out-of-place or tacked on. I kind of would like to see one or two more mystery cases or even a more difficult mystery. I did like the addition of them becoming magic detectives and the character of the reaper definitely adds a lot of humor to their missions, but I guess I just kind of wanted to see more. Maybe there is more online? I’m not entirely sure if this is the whole of the comic, but I do kind of feel like it is.

Anyways, let me know in the comments if you wound up picking this comic up and if there are any other indie romances you’d like me to review.