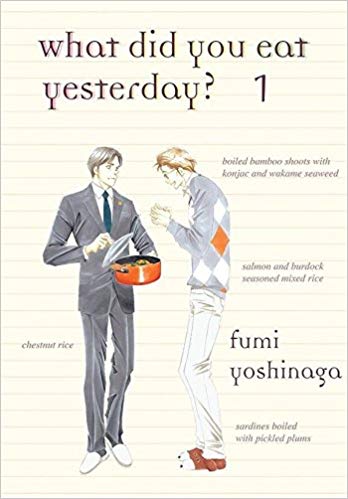 There are few things I love more than cooking manga, except apparently cooking manga combined with gay relationships. What Did You Eat Yesterday is an interesting take on both cooking manga and boys love, though I guess you wouldn’t call it boys love since both main characters are 40-year-old men, but you get my point. I found this manga through I believe a recommendation on Twitter, which it seems is where I’m finding the most interesting recommendations now, and picked it up on a whim last week to finally check out. And while I wouldn’t say it’s the best or most interesting manga out there, I think how the mangaka, Fumi Yoshinaga, tackles big societal issues through the characters and their actions means I’ll be coming back for future volumes.

The story of this manga revolves around Shiro Kakei, a lawyer by day and gourmand cook by night, who lives with his boyfriend Kenji Yabuki, a hair stylist. Each chapter deals with a new issue surrounding being gay in Japan and a different made-from-scratch recipe. Whether it’s Kakei’s unwillingness to share the fact that he’s gay with his coworkers or the case of a male domestic abuse victim that comes to Kakei for legal advice. Each of the eight chapters in this volume pairs one serious issue with a recipe fit for food lovers. I can see why it was nominated for the first Manga Taisho Award and received a jury recommendation at the 13th Japan Media Arts Festival Awards. 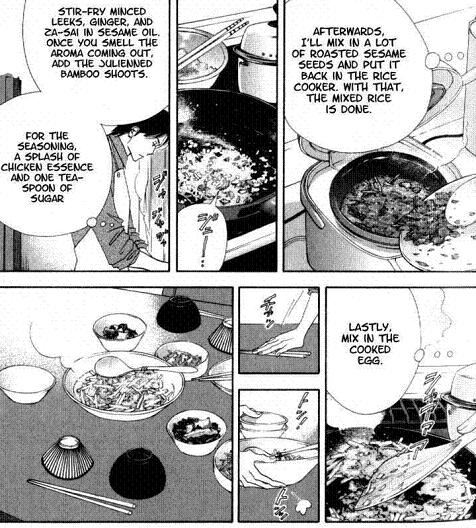 Originally published in 2007, the art of this manga definitely has a bit of an old-school feel. It’s simple and the characters aren’t as glamorously drawn to entice readers. Kakei and Yabuki are both still handsome, but not in the kind of style we see today and not with some of the weird drawing proportions that a lot of Yaoi and BL readers joke about. You can see it in the eyes too. They’re smaller, less detailed, and often are reduced to just two lines and a dot. Yoshinaga’s art style is a nice change from the usual as it feels a lot more straightforward and to the point when it comes to the character designs and even values and shading. There’s not much in the way of dark contrasting values or a lot of different effects. While there are some panels with black contrasting backgrounds and a few with dramatic shading, it’s definitely not the norm, giving the manga a more laid back and simplified feel.

You can also see this in the panel design. I’m a sucker for comics that play with panels and page layouts, and one of my main complaints about this series is just how simple the panels are. Every page is laid out in a boxy style, with no diagonal panels or dynamic designs. The pages are primarily split up into one or two large panels per page with some smaller boxes in between. This isn’t necessarily a bad thing, there have been a lot of great comics that have had fairly simple panels. Dynamic panel designs just happen to be something I prefer when I read comics. It adds an extra layer of creativity and meaning to the page beyond the art and dialogue. You can definitely see that there was thought put into the construction of each page in terms of how each panel design contributes to pacing and timing or how panel size contributes to impact.

I think the main draw of this manga will definitely be the story and cooking elements. What Did You Eat Yesterday? differentiates itself from other M/M romances in that it focuses on the lives of two 40-year-old men who are just trying to live normal lives and just happen to like good food and be gay. I think as I get older myself, I find that I’m drawn more to stories of older couples in relationships rather than high school or shoujo romances. This may not be true, but there just seems like there’s less drama or at least less of the kind of drama we see in shoujo or shounen romance. Less misunderstanding and more open and direct discussions of romance and everyday life. As I said above there are eight chapters within this manga, each dealing with another societal or relationship issue, mostly surround being gay in Japan, but there are a few other storylines that deal more with Kakei’s job rather than his status as a gay man.

I think the chapter that captured my attention the most was chapter seven, the chapter where Kakei takes on a male domestic abuse victim as a client. The chapter starts out with Kakei getting hounded by divorce and domestic cases where he feels more like he should be an advice columnist than a lawyer. Dealing with people’s messy divorces are not really his thing, and he sees those kinds of cases as annoying in a way. But then a friend calls him up with another divorce case this time involving abuse. What Kakei doesn’t realize until he gets to the meeting is that the person being abused is a man. The man had been abused and prevented from sleeping for three days and yet still wanted to go back home to his wife, fearing more abuse. As Kakei moves forward with his case we see the typical opinions of the judge and others involved, almost not believing despite seeing the evidence that his petite wife could abuse him that badly. It’s Kakei who supports him, never seeing him as pathetic and recognizing the universal symptoms of abuse.

So how does the food fit in? Well I think, in a way, cooking becomes Kakei’s way to decompress after work and his way to connect with his boyfriend Yabuki and other people in his life. Even when his mother doesn’t quite understand what it means to be gay and is enthusiastic in sometimes the wrong ways, he can still call her about food and recipes. Kakei also makes a connection in chapter two with a woman at the market that winds up becoming one of his good friends. Their friendship and him ultimately coming out to her as gay all happens over watermelon which then turns into a relationship of swapped recipes and calm acceptance of who he is. And while I think the recipes could be integrated better into the overall story, I think they do serve their purpose of both adding a different sort of appeal to a gay-slice-of-life manga as well as grounding it in more of a sense of everyday life, almost giving it a wider appeal.

There are a lot more volumes in this series and I am very tempted to continue reading this in the future. I’d love to also hear from you all as well, so if you’ve read or are interested in reading this manga, drop a comment down below telling me what you think. I’ve got some other great LGBTQ romance reviews coming up as well, so keep an eye out.