And I’m back with the continuation of my read-through of Fruits Basket as I try to remember if my childhood memories of this series are as good as I think they are. So far, we’ve read the first volume of the collector’s edition series from Yen Press which had chapters 1-12. Today, we’re continuing on to volume two which has chapters 13-24, and I have to say I’m worried I’m not going to have the time or space to really talk about everything that comes up in this volume. It’s backed to the brim with characterization, background, and meaningful moments and I really wish I could get to every one of them. I will try and get to some of the best and most important moments though, but I encourage you all to read along with me as we get closer and closer to the anime premiere.

Volume two continues the Fruits Basket story by introducing us to a new member of the zodiac right off the bat, the ox Hatsuharu. This volume is much like the second but slowly works its way deeper into the family drama lurking in the shadows of the Sohma family, peeling back the layers that is the influence of Akito, the true intentions of Shigure, and scattering hints to the traumatic events in Kyo and Yuki’s childhoods. Between these moments, Natsuki Takaya also inserts comedy and heartfelt relationship development as Yuki and Kyo grow deeper connected to Tohru. There’s Valentine’s Day, a hot springs trip, and the introduction of another new member of the zodiac who adds both comedy and drama to the story, Aaya the snake, and Yuki’s older brother.

I don’t think I got the chance to talk about Takaya’s art in the last post, and I think this might be one of the few things I find myself having a problem with as I’m rereading this series. It’s definitely a very dated kind of shoujo style, which is to be expected from a series that started in the late 90’s. My main problem is just proportions and face design, specifically the eyes in some cases. In most of the women’s faces or younger faces, their eyes can just seem a little too big for their faces. I mainly see this with Tohru, Kagura, and Yuki. I understand that that is the dominant style of shoujo manga, especially during that period, where larger eyes are supposed to allow the mangaka to display more emotion and give certain characters a more innocent or young look to them. I will also admit though that maybe I just need a bit of time to get used to the style again after reading more modern manga for the last couple years. 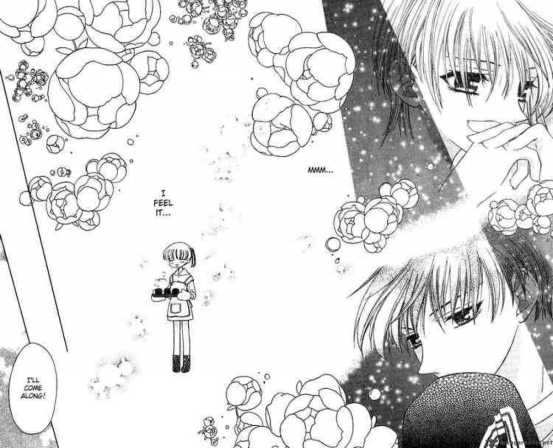 In terms of panel design, I do generally like it. I think Takaya has a lot of interesting layouts that utilize many different styles and combinations of panels to help get their story across to the reader. However, I think the amount of dialogue and exposition that’s in this series is a tad of a detriment to the page layouts as a whole. I find that while I’m flipping through this manga, I’m getting a pretty crowded sense from the pages. The amount of word bubbles and captions can begin to encroach into the art in some chapters. This is more a problem of too much exposition than it is of page design, and I’ve been noticing in general that there is a lot of explaining done by the characters, not just of the Sohma family lore but also explaining a character’s development or personality that could have easily been left out in place of showing it in the story and art itself. Overall, it’s not a huge issue since Takaya has a good amount of pages with minimal dialogue thrown in as well, but this kind of overcrowding can definitely become a detriment to pacing.

However, Fruits Basket makes up for this with its great character growth, a lot of which we see in this volume. Kyo, Shigure, Yuki, and Momiji all play a main role volume two, getting their own time to shine and delve deeper into their backstories. Bits and pieces begin to be revealed about the influence Akito has on all of their lives and how the curse of the zodiac has affected each of them individually. For Kyo, we begin seeing how his hate for Yuki has turned into a sort of psychological shield against his past, something he can hold onto and use to justify his feelings without having to dig deeper into himself and his own thoughts and emotions. In Chapter 15 we see Shigure poke this shield a little too much when he said, “Why does it sound like you’re obligated to hate him? Those eyes they look like you’re afraid to learn more about him.” On the next page we get a starkly contrasted white on black panel showing what looks like someone dead and bleeding out on the ground. His anger and hatred against Yuki protects him from this mysterious piece of his past that he doesn’t feel strong enough to face. Anger, it seems, is the only way he knows how to deal with the conflicted emotions inside of him. 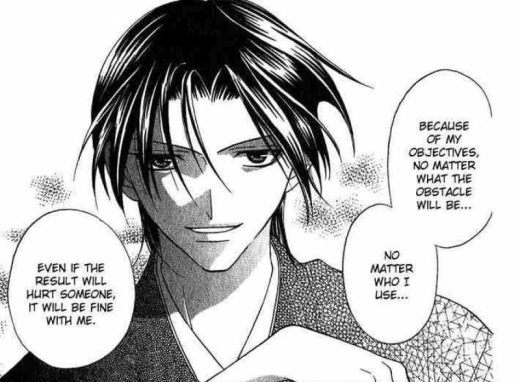 In Shigure’s case we slowly start to see his mask of the lovable playboy start to peel away to reveal more of his true personality and desires. In Chapter 16 Yuki quotes someone talking about Shigure by saying, “He’s like a ripple on water. When you approach a ripple, it backs off. Even though it brushes against your feet, if you try touching it, it moves away. A ripple can’t be caught, and neither can he.” Shigure is someone who is cheerful and welcoming on the surface, but has ulterior motives under that mask. He’s someone few people have gotten close with even though he seems like a friendly enough person. We know that he has plans for Tohru, to somehow use her to break their curse. How? It hasn’t been revealed yet, but it’s one of Shigure’s goals throughout the story. Later on he’s talking to Hori and mentions that “If I can fulfill [that vow], a few falsehoods and a little manipulation won’t trouble my conscience.” So we’re definitely seeing a set-up for deception and drama in the future for Tohru specifically, but also probably Yuki and Kyo.

Then we have Yuki and Momiji, who both get more added onto their history throughout this volume. A few snippets here and there with some hazy flashbacks and we learn that Yuki was locked in a room by himself to “get stronger” by Akito when he was still young, practically traumatising him and becoming one of many reasons for Yuki’s departure from the main house. We also see Akito’s strange obsession with Yuki, a sense of possessiveness that runs deep and denial or narcissism that makes him believe Yuki will someday come crawling back to him. But was Akito doesn’t see through this narcissistic haze is just how much Tohru has been a balm on his emotional scars, helping him to unconsciously heal from his trauma bit by bit.

For Momiji, I think he sees a kind of inspiration in Tohru. Momiji was one of the unlucky children of the zodiac, whose mother completely rejected him when she saw him transform into a rabbit. The mental strain of this caused her to suffer so much that his father thought it would be best to get her memories wiped completely of everything having to do with Momiji. Now, she just believes he is some other woman’s son. He watches from afar sometimes though, keeping an eye on his little sister. To Momiji, Tohru’s loss of her own mother and her way of looking at things through a positive lens becomes a comfort to him and vice versa. His history was revealed about the same time as the anniversary of her mother’s death and I think seeing Momiji being so strong in the face of all of this loss gave Tohru more strength to cope with her own and the memories that came with it. It’s a mutually comforting relationship I think.

But I think the highlight of this volume has to be the introduction of the two new members of the zodiac, Haru the ox and Aaya the snake. They are honestly some of the most amusing characters in this series and I remember vividly falling in love with Haru’s character when I read through these chapters the first time around. His dual Black Haru personality is pretty hilarious, but I also do love seeing his very insightful comments about Yuki and Kyo throughout the manga. Aaya is another kind of ridiculous character. Someone who is flamboyantly sure of themselves but also harbours some insecurities especially when it comes to his brother Yuki. It becomes this interesting mix of him doing absolutely stupid things but then having these introspective moments where he feels guilty for leaving Yuki by himself for so long and longing to reconnect with his brother. It’s pretty heartwarming.

So far I’m really enjoying this read-through, and I hope you are too. I always have a lot of fun returning to series that I used to read when I was younger and I can’t wait to finally finish this after so long.Let me know what you thought in the comments below. I’ll see you all in volume three!