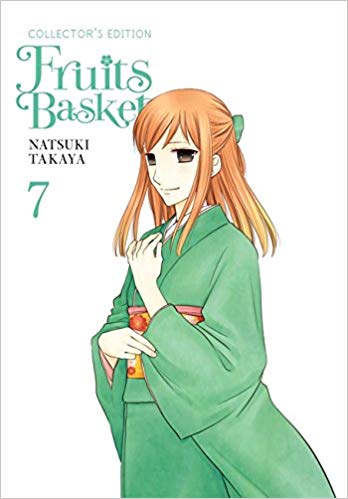 How do children relate to their parents? What do they look for, want, or need from a family? What happens when that dynamic breaks down, when children no longer have someone to look up to or a stable place to call home? I think in a way, Fruits Basket has been slowly exploring these questions throughout the story, leading further and further into the worst possible scenarios. But it’s also a series that focuses heavily on recovery from trauma and the search for stable relationships. And it’s in this exploration and character growth that I think we get to see some of the most interesting aspects of the story. Volume seven takes us closer to exploring these questions, pulling out the family histories of Yuki and Rin into the forefront of discussion. In Yuki especially I think we begin to see his slow progress to maturity.

Volume seven picks up where we left off in the parent-teacher conferences at the end of the last volume. This time it’s Yuki’s turn to face both his future and his mother who thinks she has everything planned out for him already. But Yuki has his own ideas as the story moves on to his experiences with the Student Council and the kind of rag-tag family he’s been developing there. The volume then switches to Tohru’s quest to get in contact with Kureno for Uo’s sake and her run-in with Momo, Momiji’s younger sister who has no clue about their relationship. The other large story this volume centers on Rin and her struggle to find a way to break the curse and her personal struggle with physical and mental illness. We get a full introduction to her past and how her relationship with Haru came to an end.

For every long-running series I’ve ever read, be it a webcomic or a manga, one of the aspects I get some of the most pleasure out of is seeing how the artist’s art style and skill improves over time. With volume seven, we’re currently at 83 chapters, and I have to say it’s fairly easy to see the artistic developments and improvements Natsuki Takaya has been making over the course of the series. I think we can definitely say that the art and character designs are fairly different from volume one to now, and in a way this also plays an important role in the development of the story as well. The growth of Takaya’s art and skill as a mangaka also pretty much coincides with the growth and maturation of the characters, giving us more mature and adult-looking character designs as we get deeper into their stories and the series begins to grow more serious. The chibified expressions during moments of comedy still remain, but the characters have definitely started to feel like they’re getting older and growing, not just in personality, but in design.

Spinning off of this idea, I think we see so much growth and introspection into characters this volume, especially with Yuki. I really felt like last volume Kyo really took the stage and now here we’re seeing a deep dive into Yuki’s past, his relationship with his mother, his feelings for Tohru, and his growing ability to develop relationships outside his family. Over the past seven volumes, I feel like we’ve come to know and connect with Yuki, seeing his trauma and fear around Akito and just how much it has affected him and seeing him slowly begin to forgive his brother for his apathy throughout his early childhood. All of this begins to come to a head here as he not only has to face one of the most powerful people in his life head on, his mother, but also face the thoughts and opinions he’s been harboring about himself. And it’s really only through this introspection and this acceptance of himself and his past that he’s able to move on from it, take a stand for himself, and begin to grow not only in self-confidence but in interpersonal skills as well. It’s a really heartwarming journey especially seeing him become successful at connecting with his brother and the other people in the Student Council where before he was so hesitant and unsure of himself around other people.

One of Yuki’s biggest issues that he has with himself is his feelings of inadequacy around developing friends and being the kind of person who can be confident and self-assured around people. He sees this quality in Kyo and in Kakeru who naturally have people gravitating towards them because of their open and personable attitudes, and becomes jealous. I think this issue runs deeper though,because we can see the difference in their upbringing has played a monumental role in how each of them connects with other people. Yuki lacked a mother figure in his life, was cut off from other people at an early age, and forced to stay with Akito who repeated emotionally abused him and denied him social interaction with anyone else. This kind of stifling lifestyle at such an early age most likely lead to Yuki not being able to properly develop the social skills and emotional or interpersonal maturity to really understand and know how to relate to other people. Whereas Kyo, while excluded from the zodiac did grow up with a father figure who genuinely cared for him and was afforded a lot more freedom and opportunities to grow and learn. Yuki’s first hurdle in growth then is coming to accept and learn how to deal with these feelings of jealousy and inadequacy, to realize that the only way to learn and get better is to take that first step himself. And we see this process in his growing relationship with the Student Council.

One of the aspects of this series that I actually really love is the romantic dynamics of the characters. In the beginning of the series we’re sort of teased that maybe Yuki and Kyo may clash over their feelings for Tohru at some point, but in the end we see that while they both care for her very much, their feelings are vastly different. I love that we’re not given this love triangle with vying emotions and jealousy over each other’s feelings with Tohru caught in the middle. Instead we get an examination of the different kinds and qualities of love that can manifest between people and how those feelings make sense given each character’s background. Kyo is the ultimate and unquestionable love interest here and while his own emotions are very complicated, Yuki’s are just as complex but in a different sense. He sees Tohru as a mother figure to him, something he’s never had in his life, because of her unconditional and whole-hearted support of him and her unwavering presence in his life. And while they both love Tohru, I’m grateful that there isn’t this competition for her affections and even this sense that Yuki accepts and supports Kyo’s romantic feelings for Tohru in his own way.

Besides Yuki’s story, this volume we also get to see a lot more of Rin, a character who has since stayed mostly in the side-lines for the last volume or so since she was introduced. We knew she is the horse of the zodiac, is the ex-girlfriend to Haru, and that she’s looking for a way to break the curse. But I don’t think we really got a chance to take a long look at her past until now. It’s a past full of emotional and physical abuse that pushes Rin to really doubt herself and her value as a person which manifests in neglecting her basic human needs of food and sleep, seeing herself as unworthy or less than Haru leading up to their break-up, and her desperation to break the curse in spite of her own wants and needs. What really hit me hard these chapters was this questioning of what makes a happy family. When she’s a child she sees her family as a happy one. They’re always smiling and having a good time, but then she asks why they’re never sad and isn’t that part of being a family too. Rin’s parents had tried to hide their hatred of her behind masks of happiness, whether for her sake or theirs who really knows, but that all comes crashing down when Rin points out that there should be something that makes them sad. She’s realizes that happiness isn’t all that makes a family a happy one it’s the feeling of being open and honest about emotions with one another that makes a truly happy family.

From the moment that the facade broke, Rin was looking for a way to be accepted again, longing to go back to the way it was, and internalizing the feelings that she will never be good enough again. Through her relationship with Haru we see the first bit of acceptance and support she’s had in a long time and I think Haru becomes this lifeline or rock for her that she no longer has with her own family. And it’s in these chapters that she sees Haru voice the feelings she’s never been able to, calling out her parents for the kind of abuse and neglect that became a part of her life. He calls them out for not being able to see that it’s their choices and treatment of her that’s the problem, not her as a person, some of the first validations of her worth as a person she’s heard in a long time or ever. That she’s not the “bad” one, they are. But we see the damage has already been done and thoughts that Haru will eventually come to hate her in the future just like her parents begin to permeate their relationship.

And I think that’s the most profound thing about this series. This examination of how parental bonds and love or a lack thereof can come to affect a child and their relationships in the future. We see it with Yuki and how his lack of a mother figure meant he had trouble gaining the confidence to relate to other people. We see it with Rin and how her parents rejection of her lead to this internalization of fear that she would be abandoned again by Haru. And we see it in the other zodiac members to a varying degree as well, some like Hiro and Kagura providing a sort of foil to the other characters lives or an almost source of jealousy for them.

There is so much more to talk about with this series and I have a feeling I’ll have no shortage of material to write about, but I’ll stop here for tonight. Let me know in the comments below what you thought of volume seven or where the story is so far. Drop a like down below if you enjoyed this as well, it really does help.