In the Victorian language of flowers, morning glories are known as representations of love, affection, and mortality because they bloom and die in one day. Kase-san and Morning Glories definitely adopts many of these meanings for this flower to use in the background of this manga, with budding romance and affection being the forefront of this series. If you’re looking for a sweet yuri romance for Pride Month this June, then look no further than this series. While I will say it feels very typical of a high school, shoujo romance when it comes to story, characters, and certain plot elements, but it is also a great starting point for people looking to get into the yuri genre. I don’t have much experience with the yuri genre myself, and have been very critical in the past of popular series like Citrus, so it was nice to pick up a yuri series like this with a calmer and more wholesome atmosphere. After this first volume I can see myself picking up the next four in the series.

Kase-san and Morning Glories follows the life of Yamada, a shy and clumsy high school girl who spends her time tending the gardens at school as part of the Greenery Committee. But watering the flowers out by track bring her to the attention of Kase-san, the star of the track team. Though both of them don’t seem to have much in common, their friendship blossoms quickly and starts to turn into something more. The boyish and athletic Kase-san and the small and shy Yamada now have to figure out how to make their budding relationship work. The story and art for this manga is by Hiromi Takashima and it’s currently being localized in English by Seven Seas.

We can’t talk about manga without talking about art. Hiromi Takashima’s art is pretty solid, but definitely has a certain quality to it that turned me off a little bit at the start. Her body designs and proportions can be fairly elongated at times. There were a few instances I noticed where Kase’s torso and neck looked a little too long for her body, which can be a bit off-putting. Luckily, though, this doesn’t seem to happen too much during the manga so it was easy to overlook after a while. And maybe it’s just a case of getting used to a certain art style. As someone with an art background myself, I might just notice these things more than some other readers.

Other than that, I did notice that Takashima’s style includes very large heads with eyes that sit fairly low on the face. It can create a weird look for the characters, but is not entirely a bad thing. It’s another instance of a place where readers may need a bit of time to get used to the character designs. I don’t necessarily think that Takashima’s way of drawing proportions are wrong as comic art will be stylized by nature, but it is worth noting because it did make me pause while reading. It isn’t anything like the egregious proportions in yaoi manga though, so it’s easy enough to get used to and move on with the story. 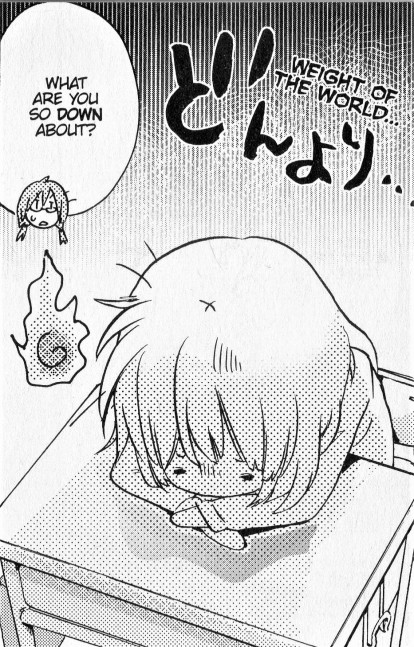 Takashima’s art can be very expressive though, with some stand-out panels like when Kase gives it her all in running. There’s also a lot of emphasis put on emotions and how they are expressed by the character through facial expressions, body language, and more stylized — or chibi — character art. Yamada is very often shown in one of these chibified forms, putting emphasis on her awkward and shy personality in comparison to Kase’s seemingly calmer character. There were some moments where I thought maybe the chibified expressions of emotion were being a bit overused, but in the end I think it adds a lot of personality not only to Takashima’s art style but also to Yamada as a main character. Her bumbling, awkward, and easily flustered self is in some instances most easily displayed through the creation of a chibi expression.

All of the above lends itself well to how the story of Kase and Yamada’s budding love is presented and interpreted by the readers. Takashima’s art style and way of presenting her characters and their reactions builds this almost innocent and wholesome love story between two girls who are still trying to figure out just who they are. The use of flower imagery throughout the manga also helps with this as well, from the morning glories throughout the first chapter to the other flower borders that pop up around Kase and Yamada in many of the future chapters. We see flower imagery in many shoujo romances, and while I’m not well-versed in all the Victorian meanings behind each kind, they contribute to a certain tone overall of young, innocent, or — dare I say — blooming romance. They’re a great addition to any adolescent shoujo love story just like this one.

As someone who has minimal experience with yuri romances, most of them less than positive, I do think picking up Kase-san was a good choice. I can see this manga being a good jumping on point for people who may not be as experienced in the genre. Since starting this blog, I’ve done a lot of research into Japanese culture and especially feminist and LGBT issues in Japan, and I can see one particular aspect of Japanese culture refected in the design of Yamada and Kase: the Takarazuka Revue. The Takarazuka Revue is an all female acting troupe where women also play the male roles in all productions. Because of this, the women in the troupe are often typecast into either male or female roles by their body type. The smaller women playing more traditionally female roles, while the taller, more boyish figure women playing male roles (otokoyaku). We can see this kind of typecasting in Kase-san, where Kase is the tall boyish counterpart to Yamada’s smaller more I guess you could say “feminine” frame. I think we see this the clearest when Yamada and Kase are out shopping together and we see them both in their preferred street cloths: Kase in her tall heeled boots, shorts and baseball cap next to Yamada’s frilly dress and flowered hat. 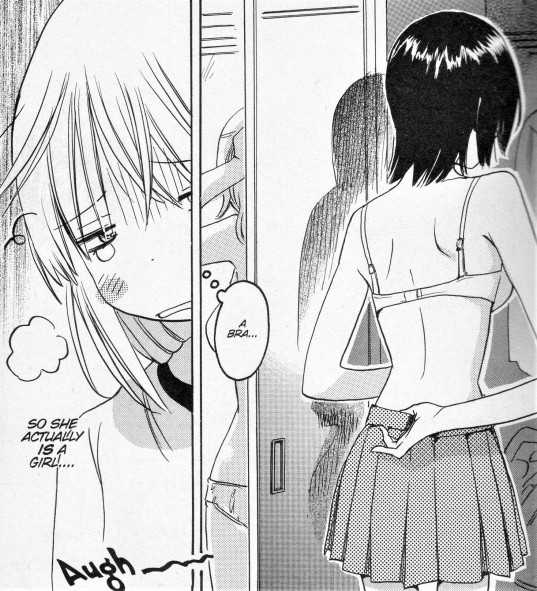 Yamada even blatantly questions whether or not Kase is actually a woman on a couple occasions despite seeing her change out of her gym clothes on multiple occasions. While this has the connotation of being Yamada’s way of questioning her sexuality by basically saying “why aren’t you a boy, so I would be more comfortable having feelings for you,” it also reinforces in a way the role Kase is given in this series. I don’t want to say she’s in any way a stand-in for a male love-interest, but her boyish looks and personality are highlighted so often that it pushes the perception of her character into a more rigid gender role dichotomy. This creates a story with fairly traditional gender roles even though both characters are women. 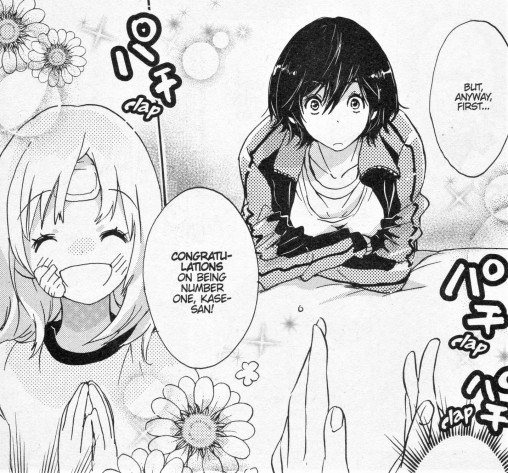 There’s nothing inherently wrong with this, sometimes the predictable and traditional are what readers are looking for when they pick up a certain manga. Kase-san is that kind of story. It’s a wholesome coming of age story about two girls finding out about their sexuality and supporting each other through their years in high school as they simultaneously build their relationship. I really love how Kase and Yamada are shown to have very distinct interests outside of their relationship: Kase with track and Yamada with gardening. Throughout the story we see them supporting each other’s different interests and ultimately building a mutually supportive relationship. I’m really interested to see where the next four volumes go as I hear it follows their relationship as they both grow and go through college into adulthood. I would definitely keep a look out for more reviews of this series in the future, including maybe the OVA.