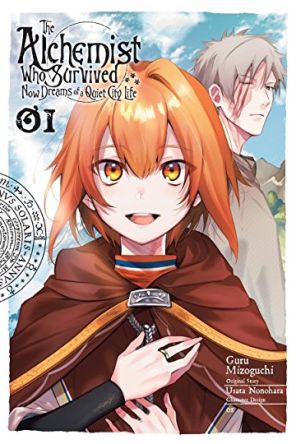 I’m always on the look-out for new manga to read and often make it a point to check in on all the major publisher websites at least once a month to see what new volumes are coming out. The Alchemist Who Survived popped up one day and its description intrigued me. The full title of the manga is The Alchemist Who Survived Now Dreams of a Quiet City Life. It’s quite a mouthful, so I’ll be using the shortened title throughout the rest of the review, but the full title does give you some idea about the nature and the story of this particular series. After reading through this first volume, I can predict that I’ll be falling in love with this series as more volumes come out. It reminds me so much of a combination of Snow White with the Red Hair in its focus on herbology and daily life and Ancient Magus Bride in its creation of the magic system. I have a deep love for series that focus on the daily life of mages, herbalists, or people in a magical setting, and I’m really interested to see where this series goes.

The Alchemist Who Survived follows the life of one of Mariela who wakes up from a magically-induced sleep to find that her former home has been destroyed by a monster stampede. To make matters worse, the spell has kept her asleep far longer than she wanted, finally allowing her wake after 200 years. In those 200 years, she finds that the city she used to live and sell her potions in has been decimated by the monster stampede, reduced to only part of its original size, and that she happens to be one of the last Alchemists in the area able to make potions. Mariela sets out to make a place for herself again, selling her potions, and trying to lead a quiet life.

As you might think, the manga is adapted from a light novel, with artists Guru Mizoguchi and Ox coming on board to adapt the manga and do the character designs. I really love the character designs Ox came up with, the outfits are detailed and give more support to the overall worldbuilding. I love what they came up with for Mariela, and if I was still into cosplay I would definitely consider making her costume. She’s just adorable, but I digress. I would say that Mizoguchi’s art is really strong in this volume. I didn’t really have any problems with the art nor did I notice any issues with the panels or pages. I don’t think it’s especially attention grabbing, but it suits the series as a whole. 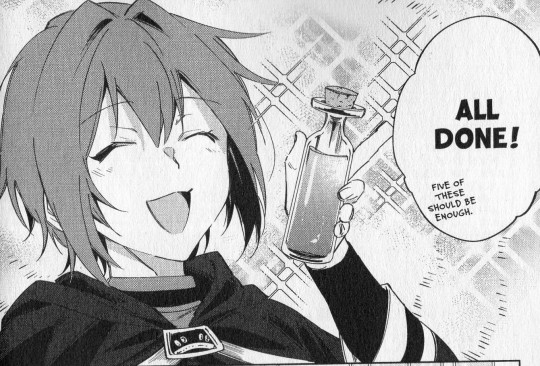 I think what drew me most to this manga was the story’s concept. I love stories about daily life with a magical twist like Flying Witch and in the past have loved stories that deal with herbology like Snow White with the Red Hair, and that’s what this story feels like in essence. It seems to take elements from a lot of popular series and puts them together in a world and narrative that works well together. We get a young woman who is now on her own without a family to support her trying to make her way in a world that is strange to her. She’s passionate and trained in making potions out of the materials found in nature and strives to build a business in the community and time period that she was inextricably thrown into. This sounds a lot like both series mentioned above, but where it differs is the extent to which magic is incorporated into the world and her background/abilities. 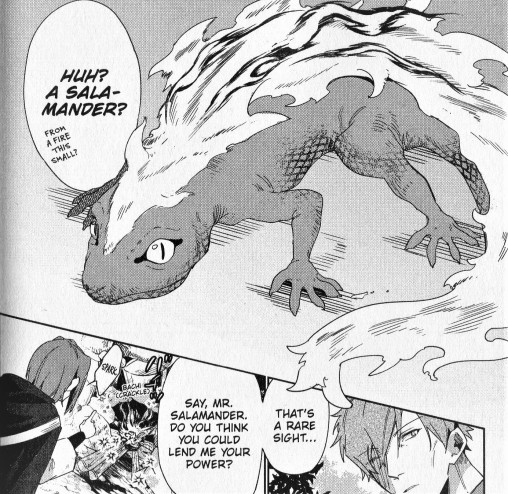 The Alchemist Who Survived has a pretty interesting magic system that reminds me a little bit of Ancient Magus Bride in a few ways. How it’s explained in the series is that in order to make potions that are effective you have to make a pact with the spirits of the area to be able to access the energy of the ley lines. Mariela can pull energy of the ley lines around her, called “drops of life,” and incorporate it into her potions to make them more powerful and easier on the body. It’s this contract with spirits that makes her different than the other alchemists or potion makers in the area. And then the magic system is built up from there, going into how she uses magic and magical circles to process ingredients and form the potions she sells. It’s really interesting how the story builds and creates all of these different plants and potion combinations. It begins to flesh out the world a lot more, and I think that’s one of the big strengths of slice-of-life narratives like this, just how much the little things begin to matter to the overall environment and setting. 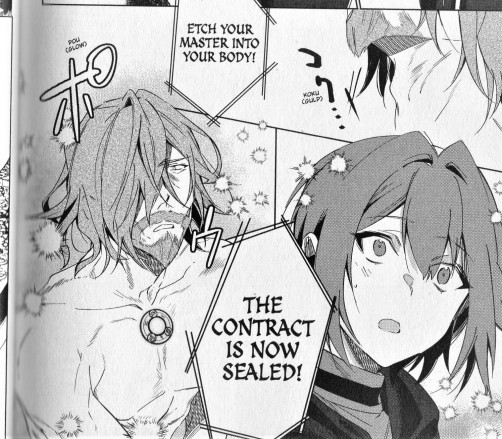 However, one aspect of the series that may draw contention is the use of slavery as a plot device. Mariela starts off as a young woman alone in a new world with the secret that she is one of the last surviving alchemists and seeks to find a companion who she can trust. It just so happens that the merchant caravan she meets on the way to the city is transporting penal laborers for sale. Mariela winds up buying one, named Sieg, and making a contract with him that would make him have to obey her commands. While I don’t completely approve of using slavery in this way, and I think there could have been other avenues the author could have taken to give her a trustworthy companion, I think the author took steps to lessen the harshness of the situation by highlighting her treatment of Sieg in a positive light.

I think in the way it becomes a similar debate with Rising of the Shield Hero and Ancient Magus Bride where you could go back and forth on whether or not the inclusion of slavery is needed in the context of the series (or even whether we should have stories that include slavery in a fantasy setting at all anymore). But in the context of the series, I do think it’s handled with a light touch. From what I’ve seen so far there really isn’t a race component to the people who are made slaves, it’s more of a punishment for those who find themselves deep in debt or are serious criminals. And while those around Mariela and Sieg seem to have a low opinion of Sieg and his status in their society, Mariela treats him well, heals his wounds, and even begins to give him spending money of his own. They both seem to form a bond with one another that I think is pretty sweet and reminds me in many ways of how Raphtalia and Naofumi are together.

I’m really interested to see where this series takes us in the future, and am a little frustrated that the next volume isn’t coming out until December (but what can you do?). If you find yourself interested in this manga and decide to pick up volume one for yourself, drop a comment down below and let me know what you think. I’d love to talk to other fans of the series!