Mythical Beast Investigator is another manga that popped up one day while I was looking for some new series to get into. I wasn’t quite sure what I would think of it, but I have an interest in all things fantasy and especially a focus on magical creatures. When I was reading Ancient Magus Bride I was always drawn to all of the weird and mythical creatures that would appear in the series, whether covertly in the background or taking center stage for a particular chapter. Here is a series that focuses on one particular troublesome creature each chapter, exploring its history and looking at how its existence fits into the larger world of this fantastical manga. While I don’t think it’s the best fantasy manga I’ve read, it’s been interesting enough that I plan on completing the series when the final second volume comes out. But therein lies one of my concerns too, that the shortness of this series will not allow the narrative to fully explore the world and creatures in it. I’m hesitant to say that this is a great series without seeing the culmination of both volumes, but it’s interesting nonetheless for those who enjoy stories about mythical creatures.

This manga’s story takes place in a world where humans and magical creatures live side-by-side, humans living beside dragons, mermaids, or other possibly dangerous creatures. And when things do go wrong, that’s when Ferry is called in. Ferry is a mythical beast investigator who longs to see peace between beasts and humans eventually come to be real. Armed with an extensive knowledge of magical creatures and fierce and mysterious protector, Ferry travels from town to town solving the disputes between human and beast, and more often than not setting humans straight about the nature of mythical beasts.

Seven Seas, who publishes the English translation, markets this manga to fans of Ancient Magus Bride and The Girl from the Other Side, but in terms of art I wouldn’t say that this manga is as detailed as Magus Bride or as stylized as The Girl from the Other Side. It does have its strengths though in that it makes heavy use some times of two-page spreads or panels that cross into the second page allowing for more detail or emphasis on larger creatures. The first chapter especially pulls you in with its large depiction of the wyvern and dragon. Those particular panels wound up being very detailed and was one of the reasons I kept reading, to see what other creatures were depicted in later chapters.

I especially love the water horse chapter. I think the illustrator, Keishi Ayasato, did a great job depicting the monstrous horse that eats children and leaves only their liver behind. One of the downsides of reading this volume in digital form on my phone is that I don’t get the full experience of the two-page spreads for this manga. Put together, I’m sure the pages would have quite the impact. Ayasato also does a great job with the father and his black dog, Grim, designing him in such a way that he really does look strong and imposing. The values used in this chapter really highlight the dark nature of the mythical beast they’re fighting, and I can’t wait for volume two to see the conclusion of this arc. I’m sure there will be more interesting art around the man-eating horse creature. 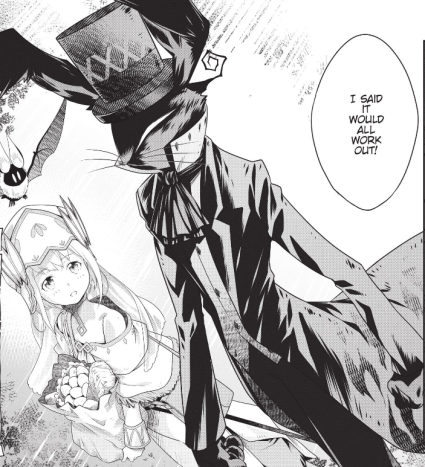 One of the other draws of this manga is the characters. They’re quite different than other manga, but I can see why Seven Seas might have compared this to Ancient Magus Bride. Ferry is accompanied by her personal guard, a giant shadow rabbit-man named Kushuna. He has the ability to become her shadow and control darkness. I can see the similarities to Elias in this and his undying devotion to Ferry. Kushuna treats her as his princess and is extremely loyal to her. He’s an interesting character in his snarkiness to those who insult Ferry but also in his weakness when it comes to Ferry. I’m not entirely sure I like his design, but as a character I think he’s pretty interesting. He comes off as a sort of chaotic-neutral character, where his first and only priority is protecting Ferry. Ferry herself has some great chemistry with him, easily able to push his buttons and disarm him with her words and actions. She’s kind of like a classic lawful-good character that contrasts well with his darker personality. 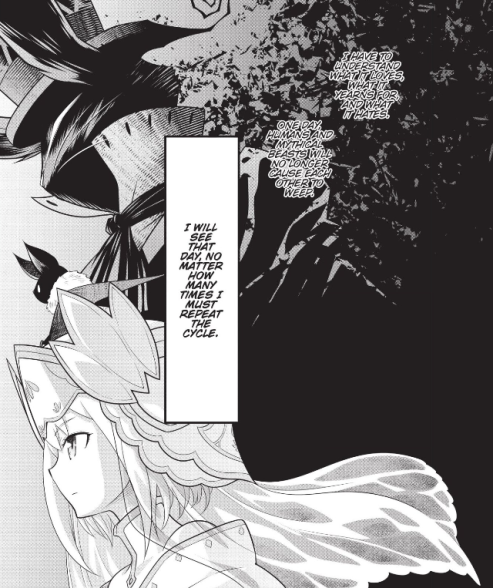 The manga’s story is episodic in nature. Each chapter focuses on a new mythical beast. The story may extend into another chapter, but usually it’s contained in a single chapter. However, even with the episodic nature of the story, there is a clear overarching theme to the manga: trying to build a peaceful existence between beast and humans and showing the importance of coexisting. I feel like it kind of has a bit of an environmental message in that Ferry makes a point of looking into how humans may have caused their own problems by upsetting the beast of that chapter. In the first chapter with the wyvern, she specifically asks the village what they did to upset the wyvern into a rampage, and the village can’t seem to get it through their head that the wyvern and its master are just as important in the grand scheme of things as their own village. It’s a clear case of humanity thinking it’s above nature and can do what it wants regardless of the consequences.

My one reservation for this series is just how short it is. I mentioned a bit above that the series is just two volumes long. I personally don’t think this will be long enough for a series of this type, especially something episodic in nature. Since most of the chapters focus on mythical beasts, we don’t really see too much development of the main characters themselves, and I really do think this series needs more space to both explore the characters and give us a greater spread of mythical beasts to learn about. The more content we get, the better sense of the world and characters we’ll have, and with just this current volume I’m not getting a complete sense of the world right now. I think the series was adapted from a light novel though, so there’s always the option of picking it up in novel form, but I’m not a huge fan of light novels so I don’t think that would be for me. I’ll definitely be picking up volume two when it comes out though to at least see where they decide to end the series.

Let me know in the comments if you are planning to pick up this manga or, if you already have, let me know what you thought!

One thought on “Mythical Beast Investigator Manga Volume One Review”