Sabrina the Teenage Witch has been a staple show in American culture since the TV show premiered on ABC in the late 90’s, adapting the story from the ever popular Archie series of comics. Now we have a resurgence of this iconic series with the recent adaptation of The Chilling Adventures of Sabrina that premiered as both a comic series and Netflix TV show last year. Well, the series has been adapted again by Archie Comics into a less chilling mini-series, simply titled Sabrina the Teenage Witch. The miniseries runs 5 issues, or 1 volume, and winds up being a great companion to the more chilling series for those, like me, who prefer a less horror themed Sabrina. The last issue was released this past September, concluding the first arc of the series, but plans for a second mini-series have already been announced for 2020. If you’re a fan of the original Sabrina the Teenage Witch with all the teenage hijinks and snarky Salem come-backs, then I would highly suggest checking this out.

This mini-series reboot follows Sabrina Spellman as she makes the move to Greendale to live with her two aunts. But adjusting to a new school and a new town has its challenges, especially for a teenager who can use magic. Not only does she have to deal with all those pesky teenage hormones and the bullies at her new school, but something seems to be transforming the teenagers of Greendale into monsters. After being forced to do battle with a Wendigo and a giant Kraken, Sabrina puts all of her magical knowledge to the test in order to figure out this mystery…in between kissing some cute boys of course.

I’m a huge fan of the Sabrina series, and have been since I could watch the reruns of the TV series growing up. With the new Chilling Adventures of Sabrina show on Netflix, I was really hoping for an interesting take on the series I loved with albeit a darker twist. Unfortunately, I found myself losing interest in that series as it went on and became so involved in Satanism and I watched some potentially interesting storylines get pushed to the side. I was really craving something like the original TV show with all its light-heartedness and snark. This new series gave me that, and I was hooked from issue #1.

Archie Comics brought in the talented writer Kelly Thompson for the story and artist team Veronica and Andy Fish with Jack Morelli as the letterer. I honestly couldn’t have asked for a better team. I love how the art turned out and how the artists and writers work together to create this really expressive and interesting comic. Each page is practically overflowing with color, vibrant and eye catching. It’s certainly the best choice for a comic about a teenage witch who consistently uses magic. I think the best part though is just how expressive all the characters are. I really get the full snarky feeling from Salem and the grumpy teenage vibe from Sabrina just looking at their faces and body language. It’s one of my favorite parts of the series, seeing just how cute or grumpy they’re going to make Salem look this time.

For a lot of Western comic book fans, variant covers can be a huge draw and money-maker for a series. They play into the collector’s mindset of some comic book fans while pulling in big name artists to give them an extra book in marketing and publicity. Sabrina the Teenage Witch had some great variant covers during its run and I’m a bit jealous of some of the people that got to the comic shop early enough to get theirs. I really love the Adam Hughes variant cover with Sabrina flying on her broom and Salem just managing to hang onto her bag with one claw. Adam Hughes is a big name in the comic scene, known for being one of the best cover artists. He’s done a ton of work with major publishers going back nearly three decades, and this variant cover really shows off a lot of that experience. Paulina Ganucheau’s variant is also adorable and was one I was considering picking up myself. It’s a cute rendition of Sabrina holding up a chubby Salem to the reader, his eyes going full rounded, cute cat mode. Paulina Ganucheau is a young and accomplished artist and I really love her style on this variant. I wonder if she’ll be brought back next year to do more. 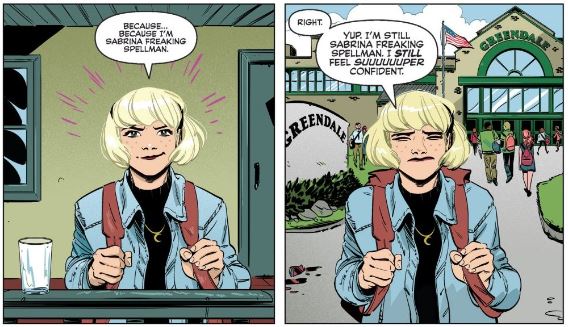 If you’re familiar with Sabrina the Teenage Witch then I think you should be familiar with the kind of narrative this series takes us down. In contrast to the Chilling Adventures, this series is light-hearted in nature, full of teenage hijinks and stories you’d typically see in a series geared towards that age-range. We have the new-girl-at-school narrative where Sabrina has to navigate her new high school and all its social hierarchies. We also have a not so subtle love triangle developing between good boy Harvey and bad-boy Ren, where she has to figure out who she likes more without hurting both of their feelings. Then you have the added layer of magic that forms a lot of the draw for the series. Facing down monsters, crafting spells, and seeing what her weird aunts will come up with next is fascinating.

I’ve never really looked into the larger universe of Archie comics series, but I liked seeing this interplay of legend and reality in the lore of Greendale in this series. How it was founded by runaway witches who escaped the witch trials and founded a town in a place rife with magic, and how a culture of witchcraft was built up in the background. We don’t get too much of the meat of that in this series unfortunately, just some mention of the legends and a glimpse at the Witch council, but it would be cool to get some more of that in the next series.

Overall I think the series had a bit of a Scooby Doo vibe. It was creepy enough to be entertaining, but definitely felt like this monster-of-the-week, pull off the mask to reveal the real culprit kind of story. We get this narrative of teenagers being changed into weird monsters and then in the end meet the culprit behind it who has a vendetta against the witches and an ulterior motive in his actions. It reminds me a bit of some Scooby Doo villains. Not technically a bad thing. I can to this series in the hopes of finding something not too complicated and light-hearted. And that’s what I got.

I’m really interested to see where Kelly Thompson takes the story next year. They mentioned it would be just a little bit darker in tone, so I’m predicting more creepy monsters but also more typical boy obsessed Sabrina and snarky Salem. Let me know if you’ve picked up the series and what you thought in the comments below.