I can’t conclude this month’s reviews of witch and magic related anime and manga without a look at Flying Witch, one of the best magic related slice-of-life’s to come out so far (in my humble opinion). The series is a calming look at the life of witches and magic users in rural Japan, an alternate society where witches exist in a semi-secret state within society. Due to the laid-back tone of the series as a whole, I would even go so far as to categorize this as an iyashikei series, or healing anime. The narratives of each episode give the viewer an intimate look at a witch’s everyday life without going into too much drama, going so far as to have very little plot at all. That is what I would call an iyashikei: warm life stories with light plots that allow the viewer to relax into a comfy state. Flying Witch has the comfy feelings down pat, the magic elements adding just the right touch of interest and difference to draw in fans looking for something unique instead of the typical slice-of-lifes out there.

The series follows the life of young teenage witch Makoto who leaves home for the first time to complete her witch studies in rural japan, living with her cousin’s family. The episodes are filled with stories of Makoto’s life living with her cousins, studying magic, going to school, and experiencing the hidden magical world around her. Each episode contains one or two contained stories with a specific story, interaction, or learning experience for Makoto or her cousins, most containing something to do with magic, but not always. The series is based off of a manga, and was picked up for the adaptation by J.C. Staff and released in 2016.

J.C. Staff did a really good job with this series. I love the character designs and fluidity of the animation. It’s one of the big strengths of the series and really adds a nice draw for a narrative that may seem a little lack-luster to some. The environments are full of color and interest, giving the world a great nature-filled rural feel with a life of its own. What I really love however, is the amount of animation and attention they give the animals in the series. Makoto and her sister both have cat familiars and they wind up playing a fairly important and central role in the series, so it makes sense that they would get a lot of attention from the animation staff. I love seeing how they animate Chito’s adventures and reactions, seeing his grumpy face as his scolds Makoto for something. But there’s also the factor of voice acting, which wasn’t skimped out on for the cats either, with Chito having a really cute meowing voice throughout the series.

One of the other popular draws of the series when it came out was the opening. Flying Witch’s opening had to have been one of the more popular ones of that year with how up-beat and catchy the song was combined with the cute animations and dance sequences added. The opening song is called Shanranran Feat 96 Neko by miwa. It’s a poppy, up-beat song with a lot of clappy percussion that creates a great catchy tune that will easily get stuck in your head from the first listen. P.C. Cast took the song and layered on top of it a really cute dance sequence with the whole cast of characters, including some of the stranger ones, that I think introduces viewers to the feel and nature of the show from the get-go. It definitely wound up being one of my favorite opening of that year and it still gets a listen from me once and a while three years later.

I’m really drawn to this series both because of its emphasis on magic and witchcraft but also because of its balance of comfy everyday life happenings. One of the funniest episodes is in the beginning of the series that has Makoto find a mandrake root while walking home from school with a classmate. She decides to pick it and give it to her new friend as a gift, not realizing that normal humans probably wouldn’t appreciate this special gift. It winds up being a really funny episode that combines both elements of magic and everyday life that comes to a head as Makoto pulls out this screaming root from the ground that winds up sounding terrible to all of our ears. Other magically entwined episodes include taking a trip to an enchanted cafe that serves a variety of interesting guests including a fox, ladybugs, and the magical community. What makes matters more interesting is that the wait staff is composed of a shy ghost who likes to keep herself invisible to the guests. It’s a really interesting addition to the world and feel of the series that gives the narrative a real sense of charm.

I’m also always interested in series that take a particular interest in herbology and environmentalism. Flying Witch sees Makoto and family settling into life in rural Japan where there’s more than enough land for Makoto to learn about planting and growing vegetables and herbs or taking a short trip out into the country to gather edible herbs and plants. With the son of a farmer as her guide, her cousin Kei, she’s taught all about the natural world and uses of the plants she can find around her even on the way to school. We see these plants transformed into delicious looking snacks, with advise on how viewers themselves can go about being herb growers or scavengers themselves. It winds up having an almost cooking show aesthetic in these instances that combines nicely with the slice-of-life and witchy elements of the show. 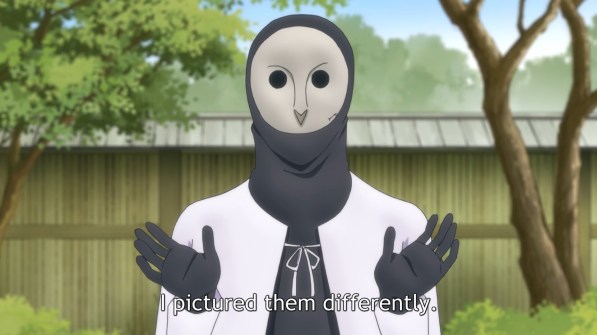 For added witchy charm, we get to encounter an interesting cast of characters from the land of magic that serve to enchant and entertain both the characters and the viewers. From ghosts to heralds of spring to giant floating whales in the sky, Flying Witch comes up with some truly unique but also classic characters to add that witchy flavor to each episode. One of the first episodes we see this happening is in the introduction of the harbinger of Spring, a strange looking character who has the face of an owl and travels around the area making sure the last vestiges of Winter are all put to rest. He makes an appearance at Makoto’s new home to welcome them to the family and winds up scaring Chinatsu. He winds up being both an interesting character and a bit of an insight into the world that Flying Witch is trying to create. His very presence gives us clues into how this world of magic functions. 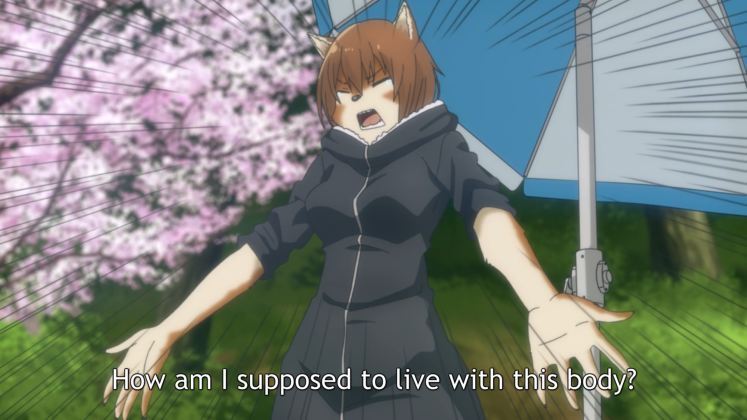 The series is full of really interesting characters who have their own quirks, like Makoto’s sister who is very powerful witch that travels the world but happens to also be a bit of a drunk and lazy person at heart. Or her sister’s friend the fortune teller who was cursed to transform into a dog-person during the day by a magic chocolate and has a hamster familiar. I wound up thinking throughout the series that the little sister, Chinatsu, might be my favorite though. She’s an almost eternally curious type who takes a strong interest in magic and tries to be a witch herself even though she wasn’t born with magic. It becomes really interesting to see her discover bit by bit the magical world that she never knew existed. She comes to act as an almost outsider character that the viewer can more easily relate to and we learn a lot about the world through her eyes and the questions she asks.

Flying Witch is the perfect series to watch if you want a relaxing series with just a tinge of magic. I found the series had become one of my favorites over the years, and in those moments where I want something relaxing but charming to watch, Flying Witch is my go-to choice. Let me know in the comments what you thought of the series or what episode what your favorite.